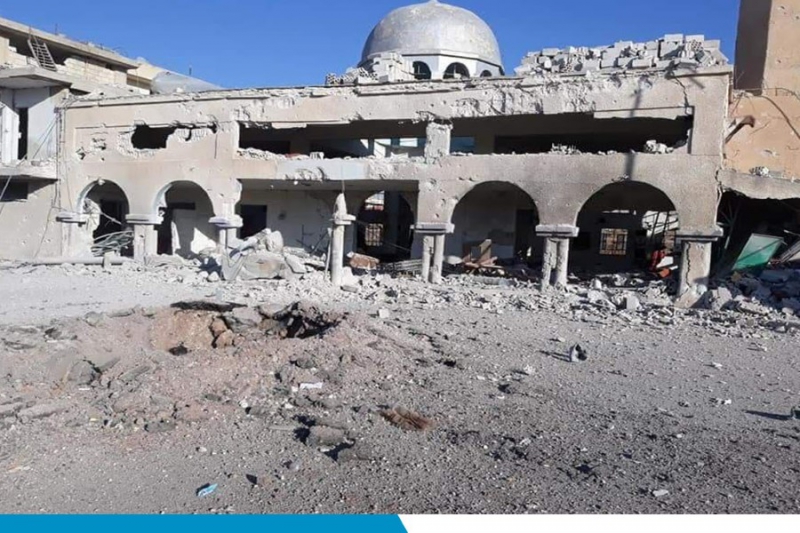 In a report published today, the Syrian Network for Human Rights documented 453 attacks on civilian centers in Syria in the first half of 2018, including 38 in June. Regime forces, followed by the forces of Syria’s ally Russia, led the rest of the groups in striking civilian centers.

The report said that since the middle of June a fierce military campaign had been waged by Syria’s ally Russia on southern Syria which resulted in damage to civilian centers. According to the report, Russia’s forces led other groups with 31 attacks on civilian centers, 16 in Daraa province and 11 in Idleb province.

Of the 453 attacks on civilian centers, 250 were at the hands of the regime, and 121 by Russian forces and two by the Islamic State and Hayyat Tahrir al-Sham. There were five by the International Coalition forces and forces of the Kurdish Self-Administration, and 67 by other parties.

The report details the centers that were attacked in the first half of 2018, with 108 on medical facilities, 103 on infrastructure, 93 on religious centers, 78 on educational centers, 46 on residential blocks, 13 on refugee camps, nine on humanitarian sites, and three on cultural centers.

The report documented 38 instances of attacks on civilian centers in June, with 29 carried out by regime forces, two by Russian forces, two by the International Coalition, and five by other groups.

The report said that in June the attacks were distributed as follows: 10 on religious centers, eight on educational centers, nine on infrastructure, nine on medical centers, one on a residential site, and one on a humanitarian site.

The report said that the Russia-Syrian-Iranian alliance violated Security Council resolutions 2139 and 2254 with indiscriminate bombardment, in addition to violating items 52, 53, 54, 55 and 56 of the Additional Protocol I appended to the Geneva Conventions, while also violating rules 7 through 10 of customary international humanitarian law.