Christian celebrations, resident transfers, civil defense evacuations and humanitarian aid from France. Catch up on everything that happened in Syria over the weekend. 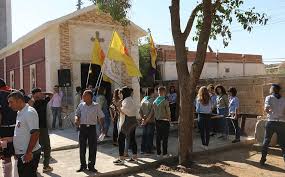 1. Christians are celebrating the feast of Mar Elias at the church of the city of Amouda (70 km north of the city of Hassakeh) in northeast Syria, for the first time in 30 years after the restoration of the clay church, which was damaged by rain and wind damage. "A group of engineers renovated one-third of the original church after collecting donations from the region's merchants and members of the Christian community in Europe," an engineers who worked on the restoration said. Reconstruction had been delayed due to the poor financial situation in recent years. The church was built in 1927. Only four Christian families were left in the city that once was a Christian city. The majority of the population now are Kurds. [Smart News]

2. The last besieged villages in Syria are being emptied of their inhabitants, following a deal brokered by Turkey and Russia which will see Idleb province under full rebel control. The first buses carrying regime fighters and civilians left the besieged villages early on Thursday morning, marking the first steps towards ending the three-year siege on the area. A reporter for SANA said that hundreds of Lattakia locals gathered welcoming 120 families from of Kefraya and al-Fouaa who have endured a three-year siege by terrorists. [SANA]

3. The Russian Defense Ministry said that 1.7 million displaced Syrians will be able to return very soon. Adding that, the return of displaced people to their areas is the first step to restoring normality and rebuilding Syria. Lt. Gen. Mikhail Mizintsev said in a press conference that the price of food and medical supplies is decreasing in the areas that have being liberated from terrorists, and the locals are getting healthcare. [Al-Thawra]

4. US officials say they are finalizing plans to evacuate several hundred Syrian civil defense workers and their families from southwestern Syria as Russian-backed regime forces close in on the area. The officials, and members of the White Helmets are due to be evacuated from Qunaitra province imminently, as the Syrian army continues to gain ground in its latest offensive. The White Helmets, who have enjoyed backing from the US and other Western nations for years, are likely to be targeted by Syrian forces as they retake control of the southwest, according to the officials. [Arab News]

5. Humanitarian aid sent by France and Russia has arrived in Syria as the two countries' leaders discussed a joint mission to distribute much-needed relief supplies in the ravaged former rebel enclave of eastern Ghouta. A Russian Antonov-124 Ruslan military cargo plane carrying more than 40 tons of medical aid and humanitarian supplies arrived on Saturday at the Russian military base in Hemeimeem after departing from the central French city of Chateauroux earlier in the day, the Russian defense ministry said. [Arab News]