Returning refugees, the economic recovery of Syria, the handover of weapons and the withdrawal from the constitutional committee. Catch up on everything that happened over the weekend. 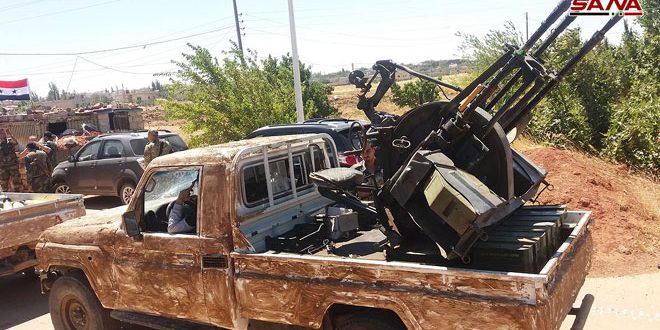 1. On Saturday, hundreds of Syrian refugees headed back home from neighboring Lebanon as part of a series of returns arranged between Beirut and Damascus. Syrian regime television reported that about 1,200 refugees were expected to cross back into the country from Lebanon before returning to their homes. Three buses carrying scores of people crossed the border into Syria during the afternoon and more than 30 other buses were in Lebanon to take more refugees later in the day. Most of those heading home were coming from the southern Lebanese village of Shebaa. [Asharq Al-Awsat]

2. On Friday, Russia urged world powers to help Syria's economic recovery and the return of refugees, as its Damascus ally pressed on with a campaign to re-take territory in the seven-year war. Russian Deputy Ambassador to the UN, Dmitry Polyansky, appealed for an end to the unilateral sanctions against Syria and said countries should not link aid to political demands for changes to President Bashar al Assad's regime. Addressing the UN Security Council, Polyansky said, "It would be wise for all international partners to join together and assist in the Syrian recovery, and to eschew artificial linkages to political momentum." [Al-Araby al-Jadeed]

3. Armed groups positioned in Jubata al-Khashab in Quneitra Countryside have handed over new batches of heavy and medium weapons to the Syrian Arab Army according to the agreement reached earlier. Over the past 48 hours, a military unit received from the armed groups a tank, a rocket launcher, two armored vehicles, three SUVs vehicles with 14.5 mm machine guns, a silica, a 122 mm cannon, tank and mortar shells, homemade rocket shells and two 14.5 mm machine guns in addition to various ammunition. [SANA]

4. Syria’s acting chargé d’affaires to the UN, Abdullah Hallaq, said that the Syrian Arab Army and its allies are continuing to liberate areas controlled by terrorist groups, stressing that all military forces will leave Syrian territory. Hallaq affirmed that the Syrian government is the most committed to providing humanitarian aid to all citizens across Syria and cooperating with the UN and humanitarian partners. He said that the Syrian government is bound by the constitution and the law to rid civilians of terrorists who have been using them as human shields for years, and that achievements the liberation of Syrian territories from terrorists is continuing on daily basis with the aid of Syria’s true friends. [Government-owned Al-Thawra]

5. On Saturday, Syria’s Muslim Brotherhood announced its withdrawal from the constitutional committee sponsored by Russia. The group said in a statement today: "The circumstances in which the constitutional committee was formed, and the basis on which it was imposed, without imposing the rest of the files of the political process, stipulated in resolution 2254, led to the reduction of the political process to constitutional amendments and elections. A transition to a Syria without Assad established by a transitional governing body working on the constitution and elections and other files, will lead to a political solution.” The statement added that this step "makes us believe that it will not serve the revolution of our people and will not achieve its aspirations, but will accept the deviation of the political path, and to seek international solutions to end our revolution and eliminate the hopes and aspirations of our people." [Ana Press – opposition website]