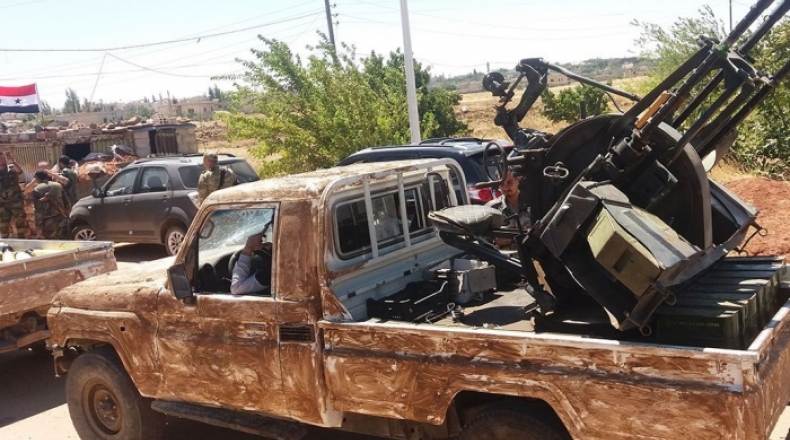 A number of regime fighters in the Yarmouk basin area of the Daraa countryside were killed by two young men, despite the men having agreed to reconciliations with the regime. It is the first incident of its kind.

Activists said that the two former rebel group members, which was part of a reconciliation settlement with the regime, opened fire on a group of regime fighters in a house, on the frontline with the Islamic State (ISIS).

The activists said that the regime forces had taken the two members with them on Monday, to their battle against the Khalid bin Walid Army which is under the authority of ISIS in the Yarmouk basin.

According to activists, the shooting killed 12 regime forces members. Syria TV was unable to confirm the identity of the two men who carried out the shooting and their fate remained unknown.

According to activists, this operation is the first of its kind, and no previous incidents have occurred in areas where the Assad regime and its allied militias have entered after imposing reconciliations with Russian sponsorship.

Regime forces have continued to advance at the expense of ISIS in the Yarmouk basin and have taken control over the village of Abdeen with clashes still ongoing in its environs, amid air and artillery bombardments on ISIS positions in the area.

On Monday, regime media announced that regime forces had taken control over the strategic town of al-Shajara (the administrative capital of ISIS in the Yarmouk basin) after clashes with the group that lasted for two days.

ISIS does not have any territory left in the Yarmouk basin except for the towns and villages of Maaraba, Beit Aara, and Kowiya on the border with Jordan, after regime forces and allied militias took control of most of the villages and towns in the area, which were struck with hundreds of air raids and upon which dozens of barrel bombs were dropped.