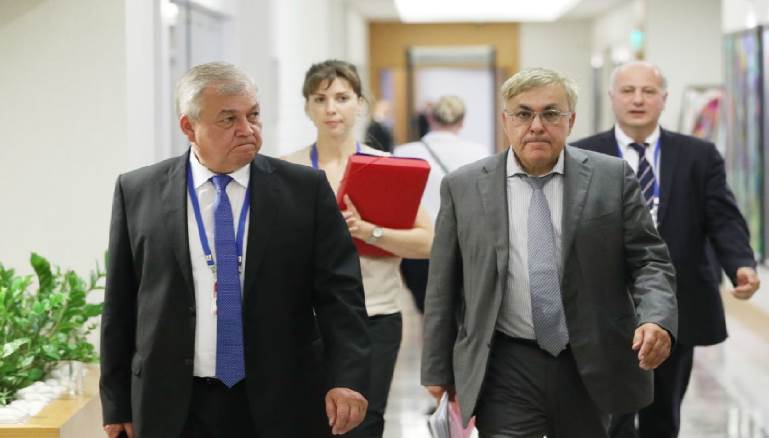 On Tuesday, the three countries sponsoring the Astana political process — Turkey, Russia and Iran — met in Sochi after the end of the first day of the tenth Astana talks which saw bilateral meetings between the participating sides.

The current session is allocated to discuss the de-escalation zone agreement in Idleb and the risks and violations related to it, as well as the issue of prisoners and a special working group for the issue, the constitutional committee, and the return of refugees which was proposed by Russia.

Al-Modon’s sources said that those in attendance first discussed a proposal about carrying out a prisoner exchange operation between the opposition and the regime in preparation for a broader exchange as a goodwill measure. However sources said that the proposal was not yet approved and that it would be discussed on the sidelines of the second day of this round, and that it could be approved in an official document.

The Head of the Russian delegation to the Sochi conference, Alexander Lavrentiev, has previously said that the issue of forming the Syrian constitutional committee was gradually moving forward and has called for there to be no barriers imposed on refugees returning to their country.

He added in statements published by Russia Today that “we have begun intensive discussions in the form of bilateral meetings, and on Tuesday we will hold trilateral talks between the guarantor countries which will include a discussion of the issues important to developments in Syria.”

He said that “the main focus is currently on the issue of constitutional reform, and on Jan. 31, 2018, a conference was held, during which the decision was taken to form a constitutional committee to push the constitutional reform process forward.” He continued, “since then six months have passed and we have grown close to achieving progress in this matter.”

Lavrentiev said that “about a month and a half ago the Syrian government submitted a list of nominees for membership in the committee and two weeks ago a similar list was submitted by the opposition. The issue of the participation of a third and sufficiently important group which includes representatives of Syrian civil society is being discussed.”

He said that after the formation of the committee, the rules and working mechanisms would be addressed, but this was still a “future issue”. He stressed that Russia, Turkey and Iran “are trying to make every possible contribution to de Mistura’s efforts aiming to start the constitutional reform process.”

He said that major concern was given to the issue of increasing trust between the opposition and government, especially in the framework of the working team sessions pertaining to the exchange of prisoners and the bodies of the dead and searching for the missing. He added that this issue was also very important, expressing his hope for the achievement of specific progress during the Sochi meeting.