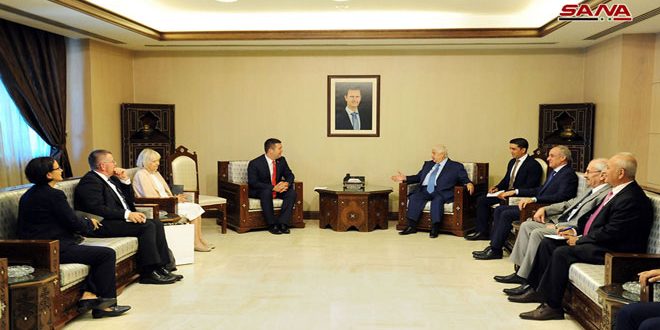 Talks during the meeting dealt with the bilateral relations between the Syrian Arab Republic and the Czech Republic, in addition to the latest developments in Syria and the region.

The exerted efforts for achieving political progress and the continuation of the fight against terrorism were also on the table.

Minister al-Muallem presented a briefing on the latest developments in Syria, in light of the successive victories achieved by the Syrian Arab Army and its backers against terrorism.

He affirmed that Syria will continue to combat the Takfiri terrorism until it is eradicated from all the Syrian territories in parallel with continuing to support efforts which aim at reaching a political solution to the crisis based on preserving the sovereignty, independence and the territorial integrity of Syria through inter-Syrian dialogue, without any foreign interference.

Minister al-Muallem also reviewed the efforts exerted by the Syrian Government on all levels to facilitate the return of displaced citizens and to provide a dignified life for them in a way that would allow them to contribute to the reconstruction of their homeland.

He called upon the international community and international organizations to shoulder their responsibilities in this regard, in cooperation with the Syrian Government, with the aim of meeting the basic needs for the displaced and for the Syrian people in general.

He referred to the negative repercussions for the Syrian people which resulted from the unilateral and inhumane economic sanctions imposed on Syria by the West.

For his part, the Czech Foreign Minister indicated to the righteousness of his country’s decision to keep its embassy open in Damascus in a way that contributed to enhancing the communication between the two countries and to conveying an objective and true image about what is taking place in Syria.

He expressed his country’s keenness to strengthening the historic bilateral relations between the two countries.

Minister Hamacek talked about the humanitarian aid provided by the Czech Republic to the Syrian people over the recent years and indicated that it will continue to provide aid.

He asserted that the Czech people stand by the friendly people of Syria and expressed the hope that political solution to the crisis in Syria will be reached and security and stability in all the Syrian territories will be restored as soon as possible.