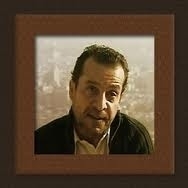 Do all Alawites support the regime? Do all Alawites in the regime's army support Bashar al-Assad despite the massacres and destruction? Or is the picture of the Alawite in the Syrian people’s minds a distortion rather than the reality?

In another context, Hmera refused to talk about what some call a “cultural movement” in Syria, saying that there wasn’t a real cultural movement under this dictatorial regime. More was said on this topicand others in the following interview:

Q: Artistic and cultural figures were the last to move in the Syrian revolution. In your opinion, why is that?

A: The country didn’t have a true cultural movement because of the dictatorial rule, and it is well known that these kinds of regimes work to flatten and marginalize society and exclude people from participation in any political, cultural and intellectual activity that is not sponsored and controlled by them. Thus, we cannot talk about a healthy cultural life in the true sense of the term “cultural”. We have a semi-intellectual and consequently a semi-cultural life. In Syria there are more than 300 cultural centers but their only job is to blowthe regime's horn, so is this culture?

The Ministry of Information's refusal to give a license to any local satellite station was clear, except for the channels that follow the regime in some way or another or are owned by its partners in investments. The true image of cultural life in the country becomes clear through this and everything is subordinate to the censor and security service.

Q: Even art is subordinate to the security service?

A: The ignorant censor controls the intellectual and artistic life, accompanied by the mindless media and media employees serving the regime. Everything in dictatorial regimes is under the control and power of the security service, and there are a lot of people claiming their work as culture when they are in fact the regime’s mercenaries in art and intellect. Thus we are the product of this tyrannical regime.

Q: Artists were the last to take a stand. What is your opinion concerning the attitudes of artists and how would you describe them?

A: I am not certified to categorize and I will not get into trouble of this kind with other artists, but I blame many of them.

A: When the censor’s decision stopped my series in addition to those series banned by the security service, none of these artists challenged these immoral and illegal procedures. Now they lament the freedom of old days. Where is the freedom they were living in?

Q: Can you tell us some stories so that the reader can know what was going on?

A: Yes, the first part of al-Husrum al-Shami (Damascene Grape), for example, remained in the censor's drawer for two years with the excuse that it hurts Syrian-Turkish relations. After two years, the same censor gave permission to produce the series after the interference ofHaithamHaqqi… and this is one example – the tip of the iceberg.

Q: You were clear in your attitude towards the revolution but are you against the regime, the suppression and the Syrian state or against the dictator?

Q: Two years have passed since the revolution started. How has art in Syria evolved?

A: All humanity knows now the situation of art in Syria; however, a new way of thinking, a new culture and a new art have begun taking their places in Syrian society.

Q: Is it the fruit of the revolution or a natural one?

Q: Don’t you fear extremism in the Syrian mood?

A: We were living in an era of extremism before: we were excluded from everything, even from making decisions related to our personal concern and personal life. In my opinion, this was the true extremism, and I am not afraid of extreme ideas being delivered here and there. Whatever shape the upcoming regime might take, it absolutely will not be worse than the current regime; thus I don’t fear any upcoming political structure.

Q: As you belong socially to the Alawite sect, would you explain to us why so few people from this sect stand against the regime?

A: No, they are not very few at all; the regime advertises that the minorities support him, especially the Alawite sect, but the truth is quite the opposite. If we paid close attention, we would see that the percentage of Alawites participating in the revolution is high with respect to their population size, perhaps even higher than the percentage of Sunni's participation in the revolution if compared to their population size. We shouldn’t forget that many Alawites cannot appear in the media or express their attitudes and roles in the revolution publicly because of the fear of suppression and death at the hands of mercenaries. In addition, the Alawite revolutionist doesn’t have the social shelter that his Sunni brother does. All these factors contribute to the false image that we have of the Alawites.

Q: But some say that the Alawite regions are calm and people don’t demonstrate.

A: This is not true as Alawites have participated in the revolution since its outbreak because suppression there is more powerful and more painful. Furthermore, the Alawites have sacrificed up to now about 23,000 martyrs of their sons and they are busy with their condolences.

I have noticed clear uneaseamong members of the Alawite sect in my last visit to the cities of Latakia and Tartous. The Alawite families in both cities embraced Sunni IDPs from Homs, Aleppo, Deir al-Zor and Idleb and provided them with aid. Some huge efforts are being ignored intentionally sometimes, and the media doesn’t focus on them for reasons I don’t want to discuss.

Q: What was the nature of the unease in Tartous and Latakia and what were the common conversations about?

A: All are worried about the fate of their sons and all are angry because of the martyrs they see as being killed in vain defending a corrupt family. They also wonder about their future in the country and the nature of their relationship with their partners and brothers in the country.