The election of a local council in Douma, in the Ghouta suburb of Damascus, is a pioneering experience, although it follows previous failures 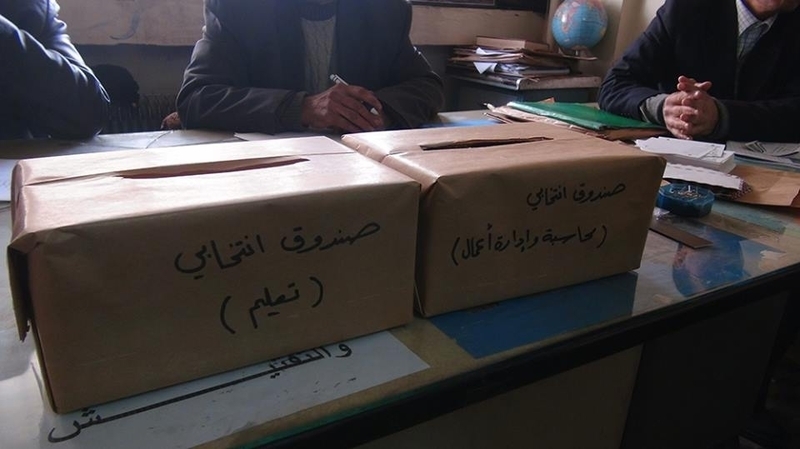 The creation of local councils in liberated Syrian areas hasn’t always led to positive results, or achieved steps capable of improving and regulating the lives of resident civilians.

Many factors have led to negative and diverse results.

Some of these factors have been structural, and have related to weaknesses at a management level of those involved in controlling these areas. There have also been acute conflicts between various ideological, political and factional strains, each vying for political money, and struggling to control particular issues which yield financial and political gains.

Other reasons have been external, and relate to obstacles deliberately imposed by the regime to limit the success of these councils and prevent them from accomplishing any significant achievements. For example, the army continues to bomb local infrastructure and government service centers, and tightening the sieges which prevent people obtaining raw material necessary to implement the most basic of council projects.

This has meant that many attempts to establish local councils have failed, or been incredibly difficult, or, in the best scenarios, resulted in councils with just minimal capabilities.

The formation of a local elected council in the city of Douma, the center of the Eastern Ghouta Damascus suburb, is considered a pioneering experience, but one which follows many previous failures.

The head of the Local Council, engineer Akram Tohme, speaks about how the Council was formed, and the internal and external problems which render this landmark experience a difficult one.

Q: Who forms the Local Council? How was it formed? And is the Douma council a unique experience in the Eastern Ghouta?

A: The Local Council of Douma is a civil, administrative service institution with an independent legal personality. It is not affiliated with any political or military body and it aims to best regulate and provide civil services and needs of the people.

It is worth mentioning that this was not the first time this was tried here, there were many previous attempts which failed.

The members of the Council were elected dependent on a vision agreed upon by most of the already existent popular activities or services in the city of Douma.

The election was held under the observation of an independent committee, the members of which did not have the right to run or vote.

Information about the electoral process was communicated through posters and leaflets distributed in mosques. And most of the civil groups which participated in the process did so through mosques, the Association of Academics and the Development Center.

The electoral process was held in the presence of the candidates and representatives of most of the city’s civil groups.

After the election, appeals were accepted, before final decisions were announced.

Most of the bodies and groups in the city have praised the process, one which resulted in a specialized and diverse Council, the members of which are mostly academics.

Q: What does the Council’s organizational structure consist of?

A: The Council has 25 members, all of whom were elected under exceptionally difficult circumstances, given the continuous siege and shelling of the city.

This is the first level of the council. The second level consists of the executive office, which has nine members including the president, elected by members of the council.

There are 15 offices working actively within in the Council, which cover all the services provided to the city.

The council is a member of the Administration of Local Councils in Eastern Ghouta. After the election, the majority of popular civil and revolutionary groups were satisfied with it, and we are ready to cooperate with all groups and individuals to improve the quality of services in the city, and to provide them to all people equally and without distinction.

Douma, like the other cities and towns of the Eastern Ghouta suburb, suffers greatly under the oppressive siege, which impacts negatively on the availability of all the main services.

There has not been electricity for 14 months, and drinkable water is not accessible everywhere in the city. All the entrances to the city are closed. Prices of goods, in general, have risen 1,000 percent, while for some commodities it is closer to 2,000 percent.

Fuel, as well as spare parts, on which much of work greatly depends, are absolutely prohibited and this loss is one of the largest problems the Council faces as fuel is vital for the work of street cleaning and garbage collection.

This problem was one of the main factors which led previous Councils to collapse, as people considered them weak and incapable.

Another major problem is the lack of sufficient financial support to enable us to maintain these essential services, and to pay the salaries of around 200 employees in the municipality.

However, the most dangerous obstacle is the continuous struggle in the city between Islamic trends — who impose their control not only through outside support, but also through the support of the Syrian National Coalition, and through the Shura Council, which they established as an alternative to the Local Council – and the civil trends, which do not receive sufficient support.

As a result, we are only able to provide a poor level of services, due to the interference of political money which is directed at certain bodies which do not have the ability to best provide these services.

In terms of the future — in light of these shortages, and the siege — after the announcement of the establishment of the Council, some outside civic organizations voiced their support, in terms of specific projects, some of which are under study, and some of which have already been implemented, such as educational and agricultural projects.

On a day to day level we mainly focus on cleaning the city and removing garbage to the interim landfill to be treated. We coordinate with both educational and health officers to support these sectors. In addition to that we also support small productive projects which are vital for providing essential commodities to poor families and the salaries of employers.

Q: It is well known that the city has been under siege for a year. What are the basic needs that must be provided, and how great are these needs?

A: We are suffering a shortage of everything due to the siege imposed on the Eastern Ghouta, especially those materials which provide basic relief services. There are 350,000 people in Douma, including some displaced from other regions. So we need a lot of different things, but the situation is very difficult.

We have opened an Office for Research and Statistics which will work to assess the needs in the city, in cooperation with the other Council offices.

Generally speaking, this Council, while it is elected and represents people’s longing for a democratic way of life, faces many challenges. It deserves more support from the National Coalition and from international organizations, so that any further attempts to destroy this unique experience can be prevented, and to put an end to extremist and uncivil trends in the region.