Assad continues his interview with Novosti and Sputnik. The interview is published here as appeared on SANA. 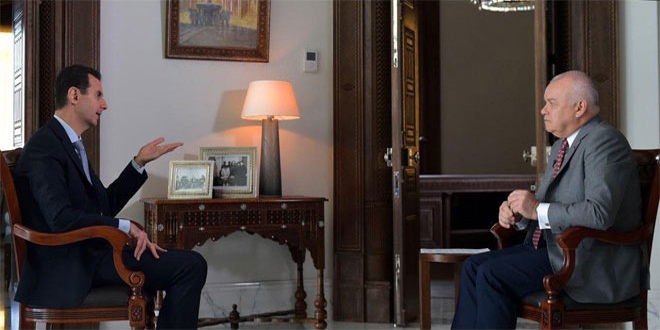 Question 1: Mr. President, there is no doubt that liberating Palmyra made international headlines; and in my view, it hasn’t been fully understood yet. it’s significant that it happened after a major part of the Russian military forces was withdrawn from your country. How did that happen, and what are the other cities you intend to move to?

President Assad: Yes, it hasn’t been understood. It is true that some people in the world have understood it, but they don’t want to believe it. Now, two days after Palmyra had been liberated, a number of countries which are supposed to be concerned with fighting terrorism, or part of the US-led coalition to fight terrorism, have not announced their position regarding the liberation of Palmyra. And I want to be clear: first of all, we haven’t heard anything from the French and British regimes. We haven’t heard any comment; and there are reasons for that. First, the occupation of Palmyra by terrorists less than a year ago was evidence of the failure of the coalition and that it is not serious about fighting terrorism, particularly fighting ISIS.

As to how we were able to do it, simply, we have the will to clean Syria completely of terrorists. This is not subject to any discussion, and there are no choices for protecting Syria if we do not fight terrorism, of course in parallel to the political process. But fighting terrorism is essential. So, we have the will, the Syrian people have the will, and the Syrian Army is determined to liberate every region.

At the same time, the support of our friends, the Russian support, was essential and effective in producing that outcome. The support of our Iranian friends and Hezbollah was important too. There are also other groups fighting with the Syrian Army. Of course, after liberating Palmyra, we should move to the surrounding areas which lead to the eastern region, like the city of Deir Ezzour. And at the same time, we will start working on moving towards the city of Raqqa, which is now the main stronghold of ISIS terrorists.

Question 2: Mr. President, Syria is rich in its history. How do you perceive your role in the history of your country, and how will it be assessed in the future by historians in your opinion?

President Assad: That depends on the historian and how objective he is. We know that history is often written incorrectly. And in our days, even the present is being forged. But if we assume that the assessment will be objective and the writing genuine, I can say that historians and the Syrian people are best qualified to make that assessment. I cannot make an assessment of myself. However, I can hope that I will be, first, in the position of someone who has preserved his country in the face of a terrorist attack unheard of in the past three decades, or maybe during the past centuries in terms of its brutality and its substance, and second, the person who preserved the region, because Syria is a major state in this region. Had there been a full collapse of the state in Syria, and chaos ensued, the whole region will certainly not be safe. This is what I hope for in the future regarding the way I will be mentioned in the future.

Question 3: A good deal of what’s happening in Syria now has global dimensions. What is your advice to the president of a state which might face a similar position to that Syria is witnessing now?

President Assad: First, I hope that no state and no nation go through what Syria has been through. What we have been through is inhuman. But you live in a world where there is no international law today. There are no morals in political action. So, everything can happen anywhere in the world. But what I want to say, based on our experience in Syria, is: first, any kind of fanaticism, whether it’s religious, political, social, or towards any idea, is destructive to society. Fanaticism should be shunned in the process of building societies. This is the duty of the state, the duty of all other parties existing in this society, and the duty of every citizen. Second, if this crisis, or another crisis, happened in any country, the first thing that any official should know is that the country will be protected by the people. And if he wanted to take a certain approach in solving the crisis, it should be based on the customs, the traditions, the history, and the present desires of the people. The solution cannot come from the outside. Friends might come to help you, as is the case with Russia and Iran today, but if there was no internal will and the relationship wasn’t good between the state and the people, there cannot be a solution. The most important lesson we learned, and I believe we have known it for a long time, is that the West, Western countries, are not genuine. Their policies are very far from principles, international law, and the United Nations. The West cannot be relied on to solve any problem. The better your friends are, the faster the solution, and the less the losses. That’s why every official should make the right choice of the friendly countries which will support his country when it has a crisis.

Question 4: At a certain point, the war in Syria will stop, but the country will come out of it different from what it used to be before. How will Syria be after the war? How do you want to see it?

President Assad: I believe that the change you are talking about has already started. It started during the past few years. In the beginning, the war shocked many Syrians and took them in the wrong direction without them realizing that, because of the media which invented stories and because of their inability to read reality, which was foggy then. Today, the picture is clear, and I believe that the change which has happened is based on the idea which I mentioned earlier, that first of all fanaticism is impossible, particularly in a diverse country like Syria. We have a great ethnic, religious, and sectarian diversity. So, for Syria to exist, if we want it to exist, we should live with each other with acceptance and with genuine, not artificial, love. This is what we have started to see in the Syrian society. I believe that if we are able to overcome this crisis peacefully, the Syrian society will be better socially, and Syria will be able to play the historical role it has played in the region in a better way. This role, which is open to society, will have an impact on other societies, because this region is one, the tribes are the same, and the customs are similar. We, as Arab and Muslim countries, are influenced by each other. Syria should have a very important role to play in this regard. On the internal level, this will naturally have a political impact. There are political parties which will participate, and the national condition will be dominant, not the condition of being fascinated by the West. This is basically how I see Syria after the crisis.

Question 5: As a politician and an individual, you observe and see on a daily basis how people die in your country. Many are forced to flee the country. They leave their homes behind. We cannot deal with that without having psychological ramifications. How do you deal with that from the human perspective? How can you shoulder such an important and difficult responsibility? And what is the form of support you receive, and who are the people who support you?

President Assad: This is very true. We live this situation every day and every hour. When you receive news about an innocent person being killed or injured, or when a martyr falls in battle. Regardless of the way this person fell, you need to think first of all about what’s happening, what happened to his family emotionally, in terms of their livelihood, or in any other area that the family will live for long years in a state of sadness. This issue affects us as Syrians on a daily basis, and it is really and genuinely painful.

But when you are in a position of responsibility, you need to turn this emotional side and this pain into action. The most important question for the official in this case is: what will you do as a result of this case, how will you protect those who were not harmed? How do you protect those who are still alive but might be victims in the near future? That’s why we believe that the two main pillars which might lead to genuine results which protect the country are: first, fighting terrorism, which is self-evident. Second, political action in order to stop what is happening in Syria. This political action includes political negotiations, on the one hand, and negotiations with the militants who want to go back, embrace the state, and live a normal life. We have succeeded in doing this to a large extent in the past two years.

The major question remains in the face of these difficult circumstances: how could a person have the capacity to stand all this pressure? I say, first of all, if you are an official, then your real power, particularly your moral and actual power, emanates from the people in general. But we as Syrians, as officials and citizens, derive our power from the families of the martyrs and the injured in Syria, because they have paid the highest price; but in return they continue to say that they offer that for the sake of the homeland. There is no doubt that the morale of these families allows you to work and to continue to give your best in order to solve the problem.