Opposition outlet AlSouria Net speaks with the Syrian actor and member of the Cairo platform about next week's negotiations in Geneva with the Assad regime, the role rebel groups will play, as well as Moscow's intentions surrounding the political process in Syria 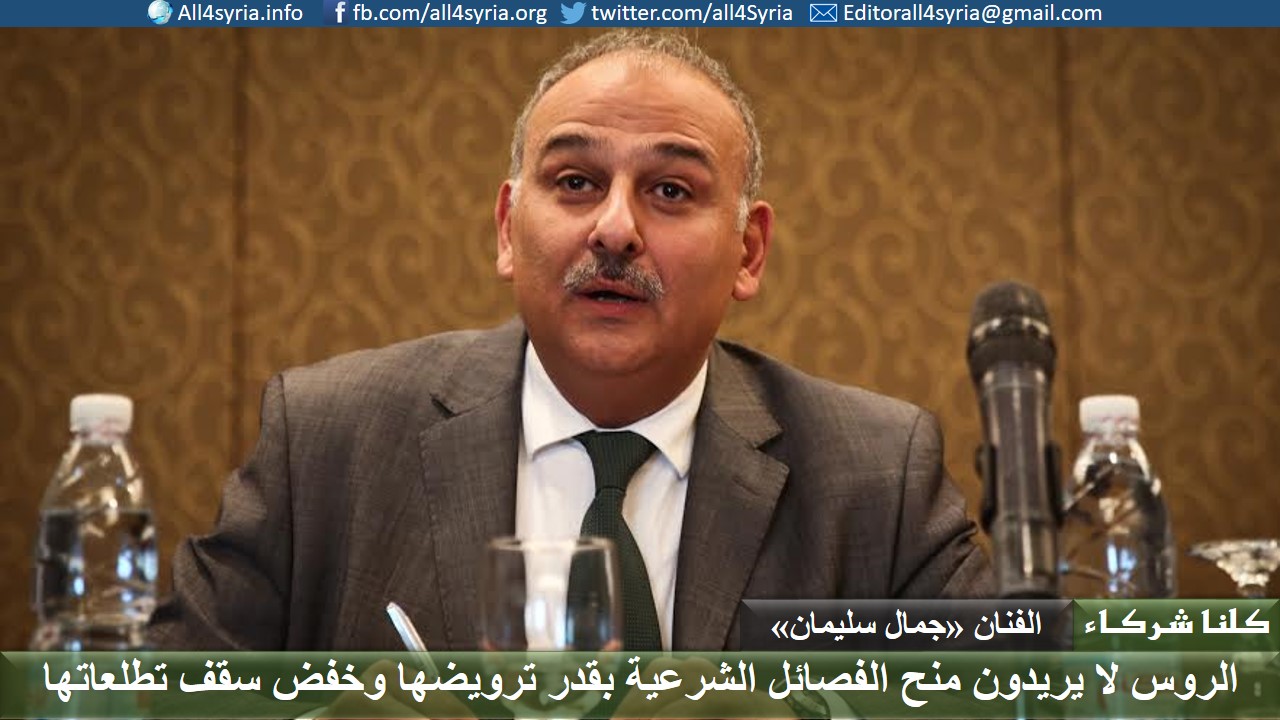 When the attention of Syrians and Arabs turned toward the television series “Al-Taghriba Al-Falastinia” in 2004, no one at the time expected that in a number of years one of its heroes would come to be embody heroism in real life.

The artist Jamal Suleiman was one of the most prominent Arab and Syrian drama stars in recent years and one of the most vocal Syrian artists calling for the Assad regime to stop its killing and to work for an exit that guaranteed the unity of Syrian territory and people and achieved justice and democracy.

At the end of 2011, Suleiman left Syria in response to the regime’s continued violence towards the revolution, however leaving Syria did not prevent him from continuing his political work and presenting the Syrian issue in Arab and international forums.

All4Syria had the following discussion with Suleiman about his recent visits to Moscow and the Russian position and on the regional conflicts around Syria, in addition to the possibility the “Cairo platform” (of which Suleiman is a member) joining a unified delegation with the High Negotiations Committee in the coming Geneva convention, and his thoughts on the Russian-authored constitution.

Do you believe that there is a silent struggle in Syria between Russia and Iran?

Definitely in Syria there is a struggle between a number of different projects. It is not just between Iran’s vision for Syria and Russia’s vision for Syria. There is a much broader struggle which has followed the loss of one of the global superpowers after the collapse of the Soviet Union, which was followed by the Iraqi invasion of Kuwait and then the invasion of Iraq itself and the destruction of its state and the breakup of its army, which created a major vacuum as the Americans failed severely.

This situation has made the two biggest regional powers (Iran and Turkey) eager to strengthen their roles and their practices as much as possible in terms of influencing and rearranging the regional situation, however the situation reached a major watershed with the return of Russia to the international scene. This returns us to the situation that we had in the 20th century, which necessitates a re-scaling of the Turkish role as well as the Iranian role. History desired that Syria would become the stage for this conflict and testing powers, as every party is trying its luck as much as possible at the expense of our suffering as Syrians.

What are the reasons in your opinion that Russia has recently pushed to acknowledge the legitimacy of some rebel groups such as Ahrar al-Sham and Jaish al-Islam (Army of Islam), and are you afraid or do you have concerns that their political role will escalate and their representation at Geneva will increase for instance?

I don’t think that the Russians want to give them legitimacy so much as they want to tame them and lower their ambitions. And so they are exploiting the regional and international conditions in order to push armed groups toward a different vision of the conflict in Syria.

Going to Russia two months ago would have been a betrayal to the revolution, but today we see armed groups in Astana and the Russians have become the guarantor power. I believe that the Russians, after military blows they dealt to the rebel groups, and after they offered them power in Syria, they want to push the groups, like the regime and the rest of the opposition factions, to accept the Russian point of view. The armed groups are trying to take the chance to present themselves as the party of right and legitimacy in confronting the regime for negotiating after the capacity for military confrontation has narrowed.

Of course we do not see this as a negative. On the contrary, we see what has happened as a step on the path heading toward a just political solution, or so we hope.

I see your optimism is cautious. Why?

After years of conflict and all the entanglements and complications, optimism must be cautious. Whenever we have felt hope, we have quickly discovered that it was only a delusion, and the killing and destruction has continued.

This pushes me to ask you if the High Negotiations Committee will succeed in preparing a united delegation to Geneva and if you are ready in the Cairo platform to join the Committee delegation, and if you have any conditions for that?

Of course we are ready for that. After our meeting with the Russian foreign minister in Moscow at the end of last month, we called on all opposition forces to sit to discuss the possibility of forming a joint delegation. But what we heard from the Committee was indirect. They proposed that they include one member from the Cairo conference and another from Moscow. Of course this is unacceptable, because we do not want to be decor to be used for public opinion.

I don’t know if the Committee was thinking realistically or if it wanted to evoke the idea of the National Progressive Front, whereby all the parties are gathered under the Baath Party. This is an exclusionary mentality that will not lead to a democratic climate and will not allow the presence of different voices.

In the end we all have to understand that we are going to negotiate through the international resolution 2254 and all efforts are within the particulars of the resolution, and that the committee has to overcome the complex that it alone represents the Syrian opposition. It needs to understand that there are other forces that are no less important than them regardless of the question of international recognition or lack thereof. We in the end are Syrians and aspire to a just and equitable political solution and an end to the killing and to liberate Syria from all the militias present on its territory, and wipe out terrorism in all its forms and guarantee a democratic transition. We gambled a lot on others and so let’s gamble for once on each other as Syrians.

Do you support the draft constitution issued by Moscow?