An interview with Kheder Khaddour on why, despite its weak fighting capabilities, the Syrian army remains a key element of the regime’s survival strategy. Here is the second part of the interview. 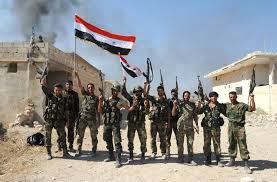 The first part of the interview was published here yesterday.

Still, these militias or “armed groups” are growing in strength. Should the regime want to curb them, would it have the ability to do so?

The scope of local militia autonomy has largely remained constrained by the means of their own creation. Commanders can establish and finance local militias through their relations with the president or other elite members of the regime, but continue to remain dependent on these relations. Militia commanders are otherwise connected by family ties. For instance, Saqer Rustom was able to become the head of National Defence Forces (NDF) in Homs because he was the nephew of Bassam al-Hassan, the Republican Guard officer who created the entire NDF corps. Similarly, Fadi Saqer was able to become head of the NDF in Damascus through both being an Alawite and having deep ties with regime figures in the capital.

Militias have decision-making leeway in tactical matters related to the fighting in their area, however overall strategic decision-making still rests in Damascus – tactical issues are de-centralised strategic matters remain highly centralised. Thus, in relation to the militias, the regime is in a sense both weak and strong – it would struggle to exert direct command and control even if it tried, while at the same time the regime remains a necessary component of the militias continued ability to function.

This has allowed the militias a free hand regarding things such as looting or criminal activity. There is a very clear line at political activity however. It is generally accepted by everyone that if a militia attempted to act politically independent from the regime, the regime and its allies, namely Russia and Iran, would crush them.

Let’s move to Iran. Where does it stand here? How does it fund the Syrian military and how much does that give it leverage over the regime?

All of Iran’s efforts are geared towards the militias rather than the formal army structures. Iran provides funding to large militias such as the NDF, or additional manpower, in the form of Iraqi and Afghan militias, of which the regime is in desperate need.

The foreign militias are ultimately loyal to Iran, and the degree to which the regime has managed to maintain influence over them varies considerably, depending on their dependence on the Syrian army’s security and logistics support. The foreign militias are effectively guests of the regime and would find it very difficult to operate in Syria if they did not maintain at least a functional relationship with the Syrian army and prominent regime figures.

The example of Louay Mualla is an interesting example of the dynamics at play here. Mualla was one of the Syrian army officers best connected to the Iranians. Through his relations with the Iranians he quickly acquired influence and became the head of a failaq (corps) even though he was below the legal age when he held that position.

Then he became head of the security committee in Homs, a very prominent position and he created a brigade completely affiliated to the Iranians. However, last year when two bombs exploded in regime-held areas of Homs and demonstrations erupted against the security committee, Bashar al-Assad felt forced to dismiss Louay Moualla. His strong relations with the Iranians and his perceived autonomy relative to Damascus were not enough to protect him.

How about Hezbollah? How does it operate within the broader decision-making structure?

Hezbollah is a ring in the chain of command but not a hub of strategic decision-making. For instance, Louay Moualla, who has strong connections with the Iranian embassy in Damascus, would not work under the orders of Hezbollah. On the battleground, Hezbollah might make decisions autonomously, but the overall strategy is largely devised in the regime’s offices in the Mazzeh district of Damascus, together with the Russians and Iranians.

How do you explain the overwhelming importance of foreign militias and the relative absence of the army and local militias in the battle of Aleppo?

What we often forget is that the Syrian army is geo-localised. This means that its division bases and their associated logistics networks were established where they were in response to perceived foreign threats – mainly Israel. Of the army’s first 12 divisions, six were located around Damascus, two in Homs, two in Daraa, one in Suweida and one in Raqqa, in addition to the Republican Guards, based in Damascus. Division 17 in Raqqa was only established after the US invasion of Iraq, while Division 15 in Suweida was established in 2001 after clashes occurred between inhabitants of Suweida and bedouins from the surrounding area. Army divisions are sort of “rooted” in these areas. They own large tracts of land and have a broad say in all matters, military and civilian, pertaining to these geographic areas.

The provinces of Aleppo and Idleb were never an important part of the Syrian military strategy prior to the uprising and so the army had no divisions based there. The border with Turkey had not been an area of conflict, even before the Adana agreement signed between Damascus and Ankara in 1998. In Aleppo, and to a lesser extent Idleb, the Syrian army did not have significant infrastructure, equipment and manpower. This explains why the regime lost large parts of these areas quickly, and why it needed such a grand coalition of Iraqi, Lebanese, Iranian and Afghan militias to hold the ground it did and retake the areas it has.

What does all that say of the future of the Syrian army? Is it possible to rebuild an army that is closer to the traditional definition of an army?

Throughout Syria’s history, there was always a difficult balance between the military and the civilian spheres. The weakness of civilian rule, which could not establish a stable government, led the way to military interventions. In 1949, only three years after Syria’s independence, the army carried out the first of the many coup d’états that would take place over the next 20 years. While the army has always played an important role in Syrian politics, it has never been what might be considered a cohesive, professional fighting force. Since it took power in 1970, the Assad regime is military in nature, but it long ago neutralised the army’s political aspirations, embedded the army into its own political project through corruption and nepotism and turned it into an instrument of regime survival.

Ideally in the future we would see the army become a professional fighting force loyal to the Syrian state. If the Assad regime remains in place, however, it will almost certainly oppose any such institutional independence for the army, or carry out cosmetic, surface level reforms that ultimately preserve its fundamental interests and entanglement in the army structure.

Today we face a situation in which the regime has successfully interwoven the survival of the army and the state with its own survival, and within the regime we have not seen the development of networks of power independent from Bashar.

One interesting development to the structure of the army during the conflict has been that in 2011 the Syrian army had three corps, but as the conflict progressed the Russians helped create two additional army corps, the 4th and 5th, which they called “volunteer legions.” This enlargement of the army structure may allow for the incorporation of the various armed groups under the army umbrella if and when the conflict is resolved.