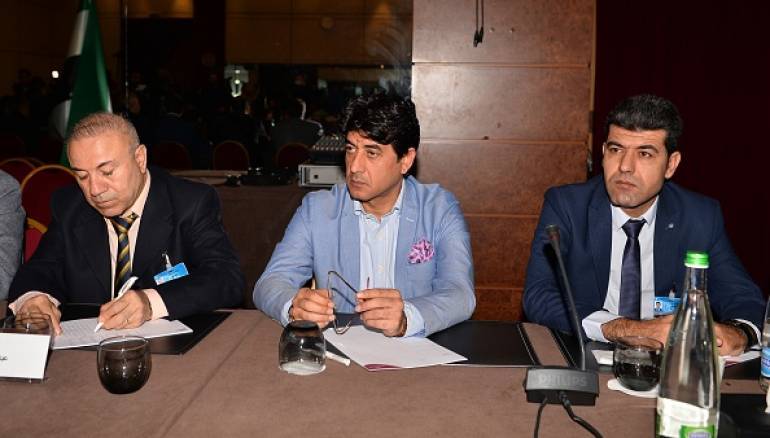 Chief negotiator of the High Negotiation Committee said that calls for “realism’’ in the opposition’s stance does not mean acceptance of Russian dictates of a political solution, stressing that anyone who participates in the Sochi conference should be excluded from the from the Riyadh II meetings.

Speaking with Zaman al-Wasl, Mohammed Sabra said Russian efforts to hold the Sochi conference signals the end of a push for a transitional phase, which the opposition considers a necessary path and the basic solution in Syria. Below is the transcript of the interview:

What is the political data concerning Sochi?

It seems the right time to hold the conference is not due yet because of the regional political circumstances around Syria. While the time for the conference was on the 18th of this month (November), the date was not confirmed and probably will not be on that date. Although the Russian Foreign Ministry announced that it had invited the participating parties, the reality is that everyone who participates in this conference should be excluded from the Riyadh conference.

You demand to exclude whoever participates in Sochi, so what is the alternative when all tracks are off?

But the regional political climate and even the military climate has changed and you are still using old speech?

When the first Geneva Statement was issued in 2012, the number of martyrs in Syria was less than 20,000. Today, (President Bashar) al-Assad has reached the stage of criminality and the bloody use of all kinds of weapons against the Syrian people, including chemical weapons. Political realism says that this regime cannot coexist with Syrians after all these crimes, and the Syrian regime cannot be a guarantor of the unity of the Syrians and the rebuilding of their identity. The solution in Syria must remove tension and restore to Syrians their existence. This will not happen with Assad remaining in power. Realism is not at all accepting that Assad remain. Realism, for the regime, means division and consolidation of the status quo, and this is not acceptable.

So the whole problem in Syria is now related to the transitional period. Why is it important?

The transitional period is necessary to comfort the Syrian society and to emerge from the state of blood imposed by the regime. The attempt to produce the regime in the current form is a continuation of the internal and perhaps regional fighting. Hence our concern for the transitional phase in which all Syrians are partners in rebuilding their homeland. What is demanded is a mature environment of stability without which there cannot be a solution.

But in Geneva the negotiations diverted from the transition to the four baskets. Who is responsible for that?

This is a framework we discuss inside the High Negotiations Committee and its organizational context. Of course, we have a structural problem in the Syrian political mentality, whether opposition or regime.

But there is a diversion in the course of negotiation. There is responsibility?

These issues are under discussion and the truth there is a transparent process in the debate which is not missing criticism and evaluation in the corridors of the High Negotiations Committee.

Is the next round of Geneva to take place on Jan. 28?

So far things are the same, but there are major developments in the whole regional scene, and this may affect the holding of the next round. On the 20th of this month there will be a decision on participation in this upcoming Geneva round.