Jordan is trying to ease the Caesar act sanctions on the regime, which strongly affect its economy, but the task might be difficult, according to Enab Baladi. 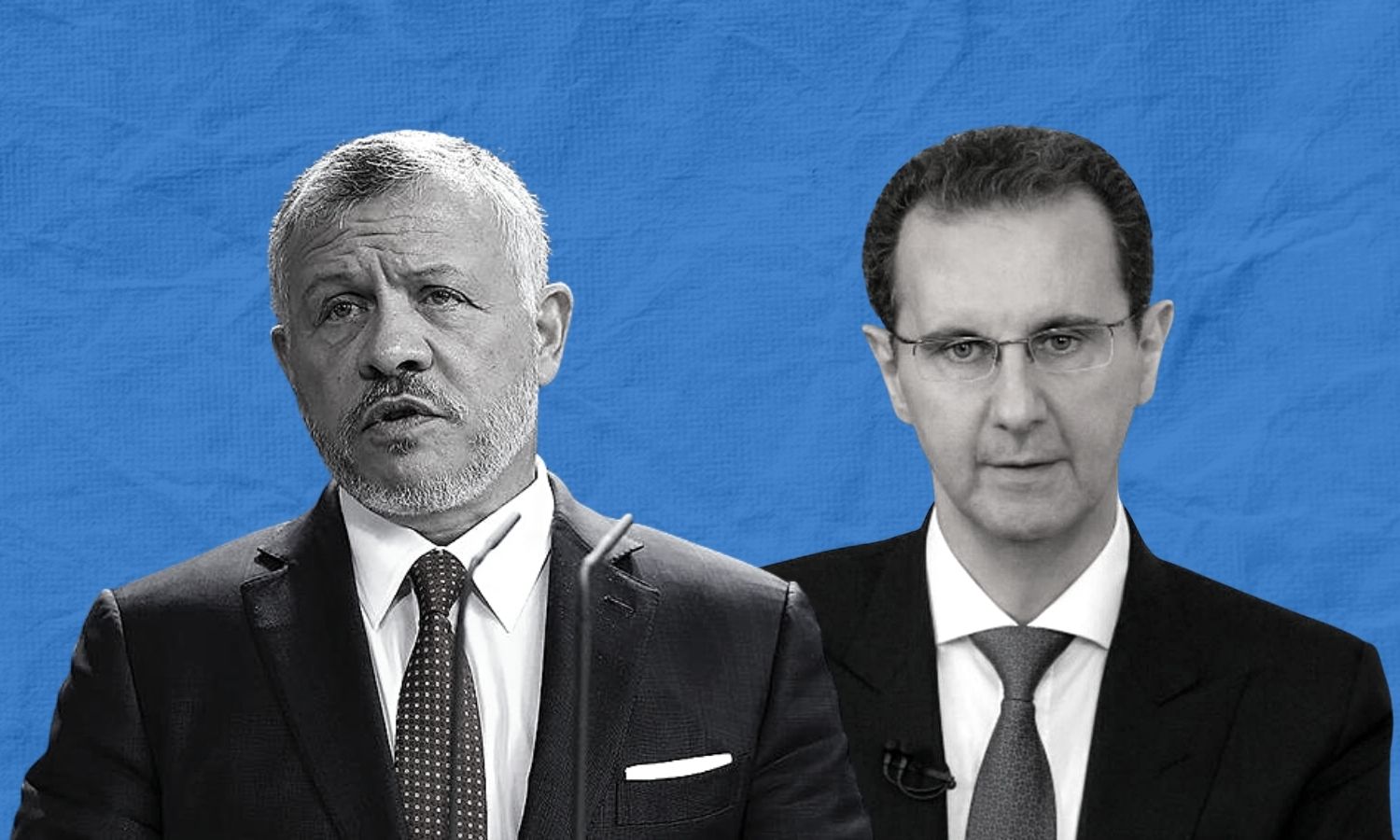 Relations between Syria and Jordan witnessed transformations after the outbreak of the Syrian revolution against the Syrian regime. At the start of the revolution, the Jordanian monarch, King Abdullah II, called on the head of the Syrian regime, Bashar al-Assad, to step down. But the relationship between Syria and Jordan changed in 2021 when the king merely requested Assad to change his behavior, despite the regime being subject to sanctions by the Caesar act.

Many questions were raised about Jordan’s policy’s transformation regarding their relationship with the Syrian regime- in case of change in their current behavior. These speculations came after King Abdullah II visited U.S. President Joe Biden, last July, in Washington, and the statement he made stating how to maturely deal with the regime and its changing behavior patterns. The questions raised dealt with Jordan’s change in policy and not Assad’s removal from office as a result of all the crimes he committed against his people, according to international standards.

The king’s visit and statements about the Syrian regime were followed by a call between the Syrian Minister of Interior, Mohammed al-Rahmoun, and his Jordanian counterpart, Mazen al-Faraya. This call, involving ministers,  was the first of its kind, in years.

The two sides agreed on “coordination” to facilitate the transit of trucks and passenger buses between the two countries.

“What King Abdullah talked about changing the regime’s behavior does not mean that he wants it to remain in power,” said Yahya al-Aridi, spokesman for the Negotiations Committee, to Enab Baladi.

“Bashar al-Assad remains in power, and the regime still exists. We have to be mature in our thinking, are we looking for regime change or behavior change? ”, the king said during an interview in Washington.

Aridi justified the Interior Minister’s communication that security matters have not been interrupted between the two countries. It does not necessarily mean the beginning of a rapprochement between the two regimes.

In June, Jordanian sources told Ammon News Agency that the Caesar Act sanctions are among the issues planned to be discussed between the king of Jordan and Biden. Adding that the Jordanian economy is the second most affected economy -after the Syrian economy- by the consequences of the imposed sanctions.

A study by the Middle East Center also suggested that King Abdullah would ask Biden to find ways to exempt the kingdom from sanctions under Caesar Act regarding trade with Syria.

Abdel Rahman Barakat, the coordinator of the Caesar Act Committee in the Syrian Coalition, said in an interview with Enab Baladi, that the provisions of the Caesar Act do not contain any exceptions to the law from the application of sanctions – whether they from countries or public figures. However, the Act talked about clearly targeted parties. These parties include foreign personalities who participate in certain deals with the regime, at all levels (economic, military, arms sales, reconstruction, or even the sector of technology services).

Concerning suspension and exemption, the Act stipulated articles related to changing the regime’s behavior at the political, military, and security levels. Examples would be discontinuing the use of air weapons against civilians, ending the isolation of besieged areas, and following the political procedure seriously.

The suspension and exemption are related only to the Syrian regime, and to the extent of its response to sanctions that were mainly aimed at changing the regime’s behavior at the political, economic, military, and security levels.

Dr. Omar Abdel-Sattar, a Jordanian expert and researcher in international relations, does not believe that the King of Jordan can ease the Caesar Act sanctions on the regime – to do so would be a miracle. The Act was passed by the U.S. Congress, and its sanctions are similar to those enacted by the Security Council under Section VII against Iraq, which were not lifted until 2003.