During a webinar organized at the American University of Beirut, seven speakers were invited to share the positions of the various stakeholders on the Syrian conflict and the future of the country. 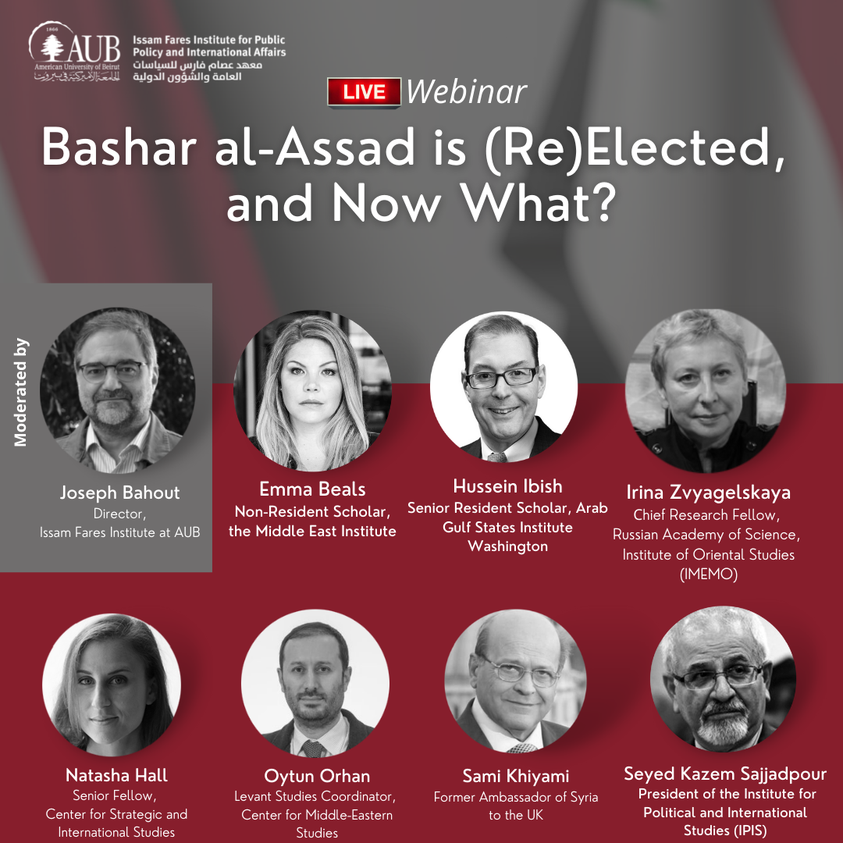 The Issam Fares Institute for Public Policy and International Affairs (IFI) organized a webinar last week explaining how various stakeholders involved in the war see the future of Syria after the re-election of Bashar al-Assad as president of the Syrian Arab Republic, in an election widely seen as a sham.

The webinar, which was moderated by the director of IFI, Joseph Bahout, welcomed an array of speakers, representing the positions and points of view of the Syrian society, the European Union, the United States, Gulf countries, Russia, Turkey, and Iran.

The first person to speak was Sami Khiyami, a former ambassador of Syria to the UK, who “criticizes the regime and the opposition.” He decried that both sides barely enjoy 25% of public support among Syria’s civil society. “I talked to notables in Idleb, and they told me that right now, the party that enjoys the most support among the Syrians is the party of ‘help us and feed us’,” he added.

“The current status quo in Syria does not disturb the main international stakeholders in the country,” Khiyami claimed. “Therefore, if you ask me if the re-election of Assad will redistribute the cards in Syria, my answer is no.”

The largest of these international stakeholders, Russia views the reelection from a positive eye, according to Irina Zyvagelskaya, the chief research fellow at the Institute of Oriental Studies of the Russian Academy of Science. “I think the election was welcomed by the majority of the Syrian society, not because they support and are aligned with Assad, but because they see in his reelection promises of stability and reconstruction,” she claimed. “In Syria, most people now think about reconciliation, and the preservation of their Syrian identity and History ” Zyvagelskaya added.

But for Emma Beals, a non-resident scholar at the Middle East Institute, representing the points of view of the European Union, this reelection in no way guarantees the beginning of the process of reconstruction or the return of refugees or Internally displaced persons. “I don’t think the EU has changed its positions towards the Syrian conflict, despite some minor variations. That is to say, the EU still insists on the implementation of UN resolution 2254 (voted towards the end of 2015, calls for a ceasefire and a political solution to the conflict through negotiations, editor’s note) and there will be no reconstruction, normalization, or sanctions relief without this,” she claimed. “EU policies, especially by individual states, are centered around accountability and humanitarian aid, but it’s no secret that some individual states are looking towards the reestablishment of ties with the Syrian regime, primarily due to concerns about migration,” Beals conceded. “But I don’t think this will change the position of the overall bloc. Instead, there will be a more nuanced set of policies implemented,” she concluded.

Nevertheless, EU states are not the only ones making moves towards the regime. In fact, some Arab countries from the six Gulf Cooperation Council (GCC) are also doing so, namely the United Arab Emirates and Bahrain. “We must make a difference between two sets of arab gulf states: First, those who have attempted to project their influence over the region, which are Saudi Arabia, the United Arab Emirates, and Qatar. And then there are those who don’t do that, namely Bahrein, Kuwait and Oman,” Hussein Ibish, from the Arab States Institute of Washington explains. “In Syria, for the gulf countries participating in the conflict, it is time for diplomacy and investment rather than giving money to proxies and armed groups, especially in light of the regime’s military victory. There is also the fact that they are not directly involved in the conflict, as they did not deploy forces in Syria, nor do they still have proxies standing there,” he noted. “The UAE, in particular, is concerned about containing Turkey and its rising influence in the long run, especially since they are not comfortable with the ideological Islamist foundations of the opposition, which is mostly-Turkish backed. This explains why they normalized ties with the regime. As for Bahrain, which is effectively a Saudi protectorate, it is used by the latter to test the grounds and allow it to indirectly establish ties with the regime. Qatar, which is opposed to immediate normalization with the regime, established a trilateral consultation group with Turkey and Russia, in an attempt to create a channel of influence over Syria that bypasses Iran,” he said.

For Ibish, Oman and Kuwait have more moderate stances. The first did not completely turn its back on the regime, while Kuwait wishes to normalize ties as soon as the subject stops being controversial for Kuwaiti society. “All of this happens in a context of American disengagement from the conflict, as U.S. policy in the region is nearly only focused on Iran’s nuclear weapons,” he remarked.

Read Also: Saudi Arabia: It is Still too Early to Talk About Normalization with Syria

And in fact, for Natasha Hall, a senior fellow at the Center for Strategic and International Studies, this American disinterest in the region is not new, rather it is part of the policy of pivot to Asia that dates back to the Obama administration. “Since the beginning of the conflict, the idea of military intervention in Syria was put aside, especially because of the situation in Libya. And when Moscow intervened, it put a nail in the coffin of any potential direct U.S. intervention in Syria. In fact, during a meeting with opposition figures, John Kerry said ‘What do you want us to do, go to war with Russia’,” Hall said.

For her, the Biden administration is currently reassessing its policy towards Syria, especially when it comes to Aid and sanctions, but no major changes should be expected. The only factors that might lead to greater involvement of the U.S. in Syria could be the use of chemical weapons, a more violent confrontation between the U.S. and Iranian proxies, and the resurgence of ISIS. As for the Syrian Democratic Forces (Kurdish led, SDF), which were on the frontlines of the fight against the group, Natasha Hall clarified that the goal behind the support of the SDF by the U.S. was not to create a Kurdish state or self-ruling entity, but rather was limited to the fight against ISIS.

The SDF however, is a source of major concern to Turkey, according to Oytun Orhan, Levant Studies Coordinator at the Center for Middle-East Studies in Turkey. “Turkey is particularly concerned about the presence of terrorist kurdish groups in Northeast Syria, backed by the PKK, at war with Turkey for decades now,” he explained. However, he affirmed that this was not the only reason behind the involvement of Turkey in the conflict.

“Turkey is concerned with the fight against ISIS, but also it is important for Turkey to allow the opposition, which it backs, to have a say in the future of their country,” he claimed. He added that the conflict allowed Turkey to project powers even out of Syria, as is the case in Libya or Azerbaijan.

Finally, Sayyed Kazem Sajjadpour, president of the Institute for Political and International Studies, explained an Iranian view of the conflict and the future of Syria after the election.”In Iran, we see that the reelection of Bashar al-Assad has given Damascus a significant boost in confidence, which will allow for an increased stability and the beginning of the reconstruction phase, in which Iran will contribute. But for this to be materialized, Turkish and American occupation must be ended, Arab States must normalize ties with Syria, and the Astana process must be allowed to move forward,” he remarked.

It should be noted that the webinar did not include representatives of the Syrian regime or opposition.