As 13,000 Syrian refugees in Europe have visited Syria between 2018 and 2021, the status of thousands of others is threatened, according to Al-Modon. 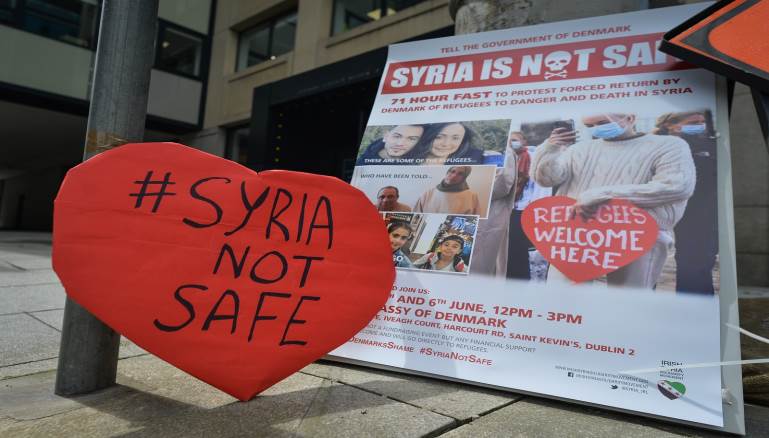 Danish media sources revealed that the country’s last cabinet, headed by Mette Frederiksen, provided the United Nations High Commissioner for Refugees (UNHCR) with data regarding visits by thousands of refugees to Syria through the Copenhagen airport. This data is part of the government’s justification for its decisions to freeze the residency permits of Syrian refugees and ask them to return home.

Data issued by the Danish government indicated that between 2018 and 2021, 13,000 Syrian refugees in Europe have visited Syria-  4,000 of whom were living in Denmark. The data confirmed that these refugees were not threatened inside Syria.

These numbers confirm, from the point of view of the Danish center-left government, that Syria or at least some of its areas (Damascus and its countryside) are safe and refugees must return there. This conclusion officially justifies Denmark’s “strict” asylum policy.

Commenting on the figures’ accuracy, Fadel Abdul Ghani, the director of the Syrian Network for Human Rights, told Al-Modon: “The statistics are governmental and accurate, and the figures are compelling. Due to these statistics, the Danish government found a way to legitimize its position on Syrian asylum.”

These figures, however, do not justify a policy of collective punishment against all Syrian refugees, according to Abdul Ghani. He added, “the irresponsible behavior by a segment of Syrian refugees has harmed all of them.”

Abdul Ghani explained that few Syrians went to Europe in hopes of obtaining residency and citizenship, not because of threats from the regime. Whereas most of the Syrians left the country because of destruction and out of fear of being arrested by the regime. He added that the refugees who do not need protection have significantly harmed asylum seekers. Abdul Ghani wondered: “But is this justification enough for Denmark to incorporate all Syrian refugees in the same category?”

A number of European countries are beginning to consider adopting Denmark’s policy, such as Sweden and the Netherlands. “Everyone is beginning to pay for the selfishness and stupidity of some refugees,” Abdul Ghani added.

On Thursday, the Danish parliament passed a law allowing asylum seekers to be expelled from Europe. There have been conflicting reports about whether this law includes Syrian refugees or not. A report published by the Ministry of Immigration and Integration, in October 2020, found that Damascus and its countryside were safer than other Syrian regions. Thus, Syrian refugees from these areas could return back.

Fadi Moussalli, a Syrian asylum activist in Europe, called for residency freezing measures to be limited to refugees who have visited Syria since receiving asylum in Denmark and other European countries.

Moussalli spoke with Al-Modon on the phone, in front of the Danish parliament, where dozens of Syrians and Danes are protesting against the deportation measures. Musalli said, “It is surprising that the majority of refugees whose residencies have recently been frozen need real protection against the regime’s brutality. While no actions have been taken against those who have visited Syria.”

An estimated number of 44,000 Syrian refugees live in Denmark, 35,000 of whom have entered the country after 2011. A number of these refugees have received political asylum, temporary residency, and “temporary protection” residency.