The Constitutional Committee has had little success since it was formed, and Geir Pedersen is now under pressure to announce its failure reports Asharq Al-Awsat. 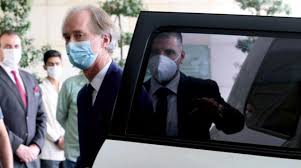 The UN special envoy for Syria, Geir Pedersen, is under immense pressure to announce the failure of the Syrian Constitutional Committee talks and search for other political solutions to the country’s war and implement Security Council Resolution 2254.

The clearest statement in that regard was made by the US during the meeting of the Foreign Ministers of the Small Group on Syria last week.

Washington believes that Pedersen should name the party responsible (the Syrian regime) for the failure of the Committee’s meetings, after three rounds of talks did not deal with Syria’s constitutional reforms.

According to the US, the UN envoy should launch a new political process, rather than sticking to the constitutional reforms, as called for Resolution 2254.

During discussions on the joint statement by the Foreign Ministers of the Small Group on Syria, some countries were surprised by attempts to delete parts of the text on the political process and elections to pressure Moscow and Damascus and to give Pedersen more impetus.

But the American resistance to that attempt was clear. Washington held onto a detailed statement.

“We urge continued engagement with the committee to ensure substantial progress on the discussion of the constitution in line with the committee’s mandate and procedures. We stand behind Special Envoy Pedersen’s efforts to convene the fourth round of meetings, which must discuss substantial issues in order to achieve meaningful progress,” it said.

“Steps should be made to advance all of the other dimensions of the political process, including towards the convening of UN-supervised free and fair elections in a safe and neutral environment as outlined in UNSCR 2254, in which internally displaced persons, refugees, and the diaspora must be able to participate,” it added.

The statement came at a time when Russia is seeking to convene a two-day conference on Syrian refugees in Damascus on November 11.

Some of the countries neighboring Syria have avoided tension with Russia, but the American pressure was clear in pushing certain European and regional states to snub the conference.

No doubt that a visit to Beirut by Russian presidential envoy to Syria Alexander Lavrentiev, after a trip to Amman and ahead of visiting Damascus, was aimed at discussing the upcoming conference and its possible postponement.

During the meeting of the Foreign Ministers, some Arab states discussed the Turkish presence in Syria and succeeded in adding the rejection of a “forced demographic change” to the statement.

The statement also expressed concern over a possible “further internationalization of the Syrian conflict” by the transfer of combatants and equipment by various parties to other areas of conflict, in reference to Moscow and Ankara.

Against this backdrop, Pedersen met with the Syrian Foreign Minister, Walid al-Muallem, in Damascus and held two meetings with the head of the government delegation, Ahmad Kuzbari, in hopes that he would clinch an agreement on the agenda of the Constitutional Committee’s new round of talks which he believes should focus on constitutional reform.

The head of the opposition delegation, Hadi al-Bahra, had agreed to a proposal to discuss the national principles during the first three days of the fourth round of discussions next month, and then move onto the preamble of the constitution, in hopes for continuing the talks during the fifth round by the end of 2020.

But Pedersen failed to clinch a deal from the government delegation, and during his briefing at the UN Security Council on Tuesday, he reminded the conferees (mainly the representatives of Damascus and Moscow) that the formation of the Constitutional Committee was agreed upon a year ago in a UN document clearing stating that it would function without preconditions and “focus exclusively on its mandate: to prepare and draft for popular approval a constitutional reform.”

“The co-chair nominated by the Syrian government took the position that the third session agenda – focusing on national foundations and principles – should remain the agenda for a fourth Session,” Pedersen told the Council.

“The co-chair nominated by the opposition SNC took the position that the agenda for the fourth session should focus on the preamble, constitutional principles, rights and freedoms, the rule of law, or the structure of the constitution.”

He said the Committee should work expeditiously to produce results without foreign interference.

His statement draws questions on whether Pedersen would announce the failure of the Committee to proceed in its mission.