Teachers in Deir ez-Zor have rejected a curricula that was provided by the the Kurdish Self-Administration, in favour of one developed by UNICEF writes Zaman Al-Wasl. 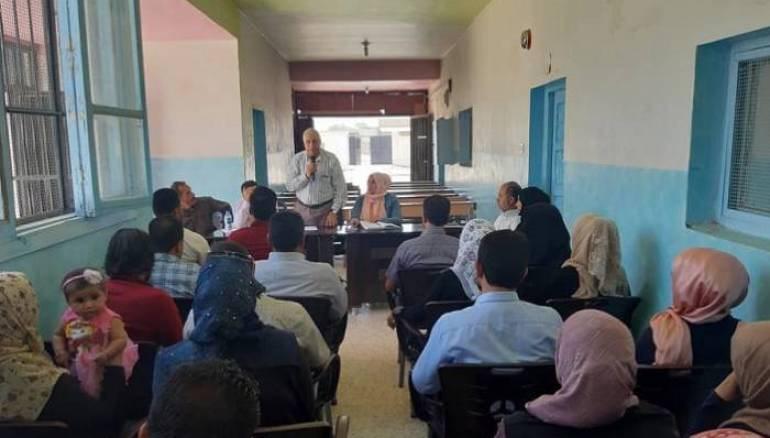 Teachers in the Kurdish-held part of eastern Deir ez-Zor province have refused to replace the UNICEF curricula with a Kurdish educational program in the elementary schools, activists said Sunday.

The curriculum is promoting the Kurdish militant movement and personalities, in a region that is historically known as the land of Arab tribes.

The Council of the Self-Administration in Deir ez-Zor announced that the results were negative, following meetings with the teachers and families regarding the curricula which was tested on the first to the fourth grades in the Jazrat, al-Kasrah, and al-Husain areas. Teachers refused to accept the alternative curriculum instead of the UNICEF curriculum that was used previously.

The Chairman of the Deir ez-Zor Civil Council, Leila al-Hassan, said during a meeting that the curriculum is under discussion and it can be modified according to the region.

The rejection was also unanimous during a vote at a meeting held at the Abu Hamam Education Complex, as well as in al-Shahail, Sha’fah and Hajin, east of Deir ez-Zor. Attendees of the meeting objected to its scientific weakness and its contradictions to religion, customs and traditions of the local community.

For his part, a school principal in al-Bahra said that they rejected the curriculum of self-administration because of the change from Islamic education to “Beliefs of Nations”, which could be understood as fighting the Islamic religion and marginalizing it, in addition to adding the “Women’s Science” book for the preparatory grade, which is contrary to Islamic customs and law and calls for the liberation of women in the Western way.

He added that the nationalism subject, which glorifies the Ba’ath Party and its men (symbols of the Assad regime), was replaced with “the Democratic Nation” book that glorifies Kurdish figures and the Kurdish struggle (the Democratic Union etc.) as well as introducing a book on the history of Kurdistan and Kurdish folklore, while information about what happened in Deir ez-Zor, during the revolution and before, was absent, and thus changed the important role of the region.

The source pointed out that they demanded the inclusion of the Holy Koran and Islamic education as main subjects.

Likewise, a group of teachers that spoke during the meetings said that, “the emergency curriculum provided by UNICEF is better than the curriculum from the self-administration.”

On Friday, the Education Authority in the Self-Administration held several meetings with the families of students in al-Tabqah, west of Raqqa, after objections to the altering of the curriculum adopted by UNICEF, on the pretext of delaying the obtaining of the textbook and the low level of these curricula, which are not commensurate with the age levels and mental capabilities of students, which teachers refute is excellent and its authors are well-known names, but the Administration has refused to reproduce books to enforce their curricula.

The most prominent objections of the specialized teachers to the new curriculum can be summarized as follows:

The women’s science subject, which is considered sexual      content that is not suitable for the local community and cannot be allocated to children in pre-university education, so it should be canceled.

The Culture and Ethics, or Beliefs of Nations, as an alternative to Islamic education that discusses the Zoroastrian and Yazidi religions and religions sanctifying nature. They requested that they be abolished because people in areas of SDF control in Deir ez-Zor are Muslim and there are no Zoroastrians, Yazidis or other religions.

History: Paragraphs talking about important historical stages were omitted; especially when talking about Umayyads, Abbasids and others. Also, highlighting recent events and considering that the events of Qamishli in 2004 are the beginning of the Syrian revolution, and mistakes and faults must be corrected and historical paragraphs that talk about the role of Arabs in historical events must be mentioned.

In geography, maps were manipulated and maps of northern Syria that included the name “Rojava” and others, and must be corrected.