Bouthaina Shaaban has said that Syria will overcome the new US sanction resulting from the Caesar Act and will strengthen relations with is allies reports Al-Watan. 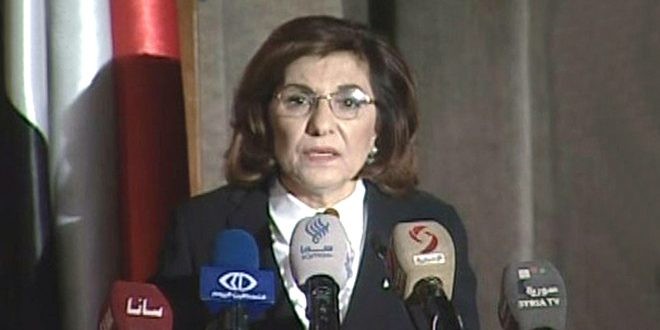 The Syrian president’s political and media advisor refused to go through the conditions for repealing the Caesar Act, describing them as “impossible.”

In a statement to Al-Watan, Bouthaina Shaaban said that the Caesar Act’s conditions simply demanded the cancellation of Syria’s sovereignty. “If we wanted to submit to these conditions, Syrians would not have gone through a nine-year war to defend their independence and autonomous decision-making,” she said.

According to Shaaban, Syria was targeted for its role as a main pillar in the axis of resistance. The country forms an important link in the Middle East and in the regional and international balance, as well as occupying a position of resistance to occupation, terrorism and oppression that the region faces today. “It is known that there aren’t many other countries in the world that have the audacity to make their own autonomous decisions. The war on Syria is a war on its autonomy, because it refused to be a dependent state and execute what is dictated to it,” she said.

What is new with the Caesar Act, Shaaban pointed out, is that it targets Syria’ allies and not just Syria. The act mentions “Russia and Iran” by name in a number of articles. This is not surprising, as the past two years have seen a number of research centers, most prominently Israel’s Institute for National Security Studies, claim that the most dangerous result of the Syrian war is the alliance that formed between Syria, Iran, Lebanon and Iraq. There is no doubt that the alliances formed by the war on Syria have created a new regional and international reality. Within this new reality, China and Russia have emerged as two major international axes. And today, the battle, at its core, is about forming yet another world order when the COVID-19 crisis ends. We are now living through the labor pains of that new world’s formation.

As Shaaban pointed out, the United States placed a formative clause in the Caesar Act related to the financial system, namely that any company or individual working with Syria is to leave the SWIFT system. This is a challenge that must be faced by a bloc rather than by individual states because it impacts the entire world.

Shaaban stressed that, “we must be even-keeled and unafraid, while not neglecting to face these sanctions with the knowledge that all these pressures are aimed at accomplishing what terrorism could not accomplish. The phrase ‘true warfare, not proxy warfare’ is accurate here. It has been proven to the world and to public opinion that everything we’ve faced these past years has been by state planning. So we must keep up the same determination and patients that we’ve had throughout these years of war on Syria—this is not something easy, but we have no choice but patience and steadfastness. This steadfastness will pay off soon enough.”

Shaaban added that there are already blocs beginning to form worldwide that reject American hegemony. “This is something that makes Washington anxious, as the US is already under threat of losing its top international position. We are more optimistic for the near future, as Syria has also become a focal point of these new international blocs, which through Damascus and the Syrian people have found a place for themselves on the global political map.”

Shaaban considered it important that Russian President Vladimir Putin recently appointed Ambassador Aleksandr Yefimov as his Special Envoy in Syria, as the move gives Syria a position not enjoyed by any other country. The move also followed a state of confusion that some people tried to cause about Syrian-Russian relations.

The alliance between Syria and Russia is strategic, Shaaban stressed, adding that Putin’s request from his defense and foreign ministries to negotiate with the Syrian government over expanding Russian military bases is to support Syrian-Russian relations so that they can become multi-level and institutional in the future. Shaaban described Russia as an honest and transparent ally. Bilateral relations have been tested by time and events, and there is major interference disrupting these relations, Shaaban said, confirming that any doubts about the Russian-Syrian relationship or Syrian-Iranian relations both serve and stem from the nation’s enemies. According to Shaaban, the important thing is to maintain a high level of confidence in ourselves and in our allies, adding that “we  share the same strategic views and tactics.”