After failing to completely hold back the advancing regime, Abu Mohammad al-Jolani is looking to rebrand himself as essential to the future political scene in Syria reports Alsouria Net. 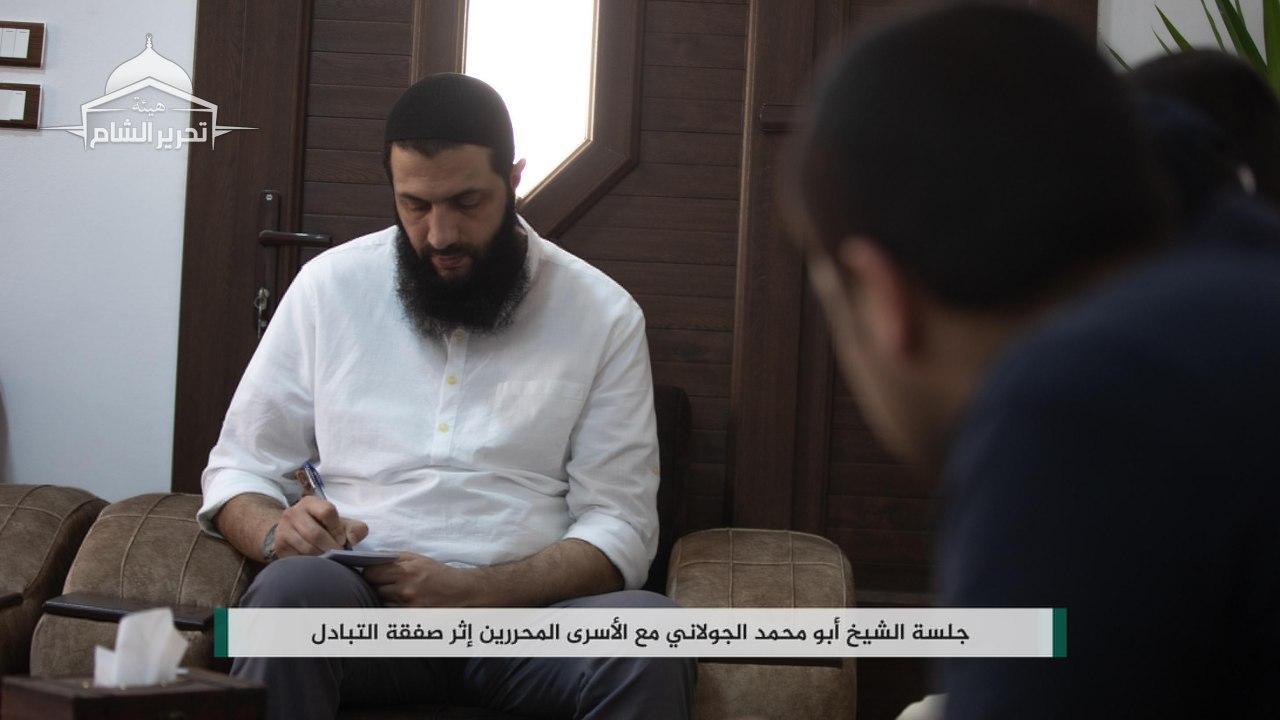 In past years, during his transition from commander of Jabhat al-Nusra, which was affiliated with al-Qaeda, to Jabhat Fateh al-Sham, and up until now, as commander of Hay’at Tahrir al-Sham, Jolani limited himself to just a few media appearances to talk about the latest field and military developments.

But this past May saw Jolani increase his public activities. He not only appeared to discuss military matters, but also turned to meetings with civil and medical actors.

Jolani’s latest appearance, on Monday, saw him meet with medical associations and syndicates in northern Syria alongside a number of medical authorities, with the aim of finding a solution to the rising prices of medicine in the area, according to Telegram accounts close to Tahrir al-Sham.

Monday’s meeting came after a number of meetings he held with various sides starting on May 2, 2020, including with the wounded and injured in a hospital. Afterwards he met with Tahrir al-Sham fighters near the frontlines in rural Idleb, then visited a displacement camp, tribal leaders and the residents of Jabal al-Zawiyeh. He then met last week with “children of the martyrs,” on the occasion of Eid al-Fitr.

These public appearances have been distinguished by two things: first, the media coverage that has accompanied him on all the visits, with the Tahrir al-Sham-affiliated Ebaa News agency photographing Jolani’s every move.

Second, Jolani appears carrying a pen and notebook in some of his meetings, recording the complaints of those he speaks with, indicating his interest in their problems and working to solve them.

These meetings have all followed popular protests against Jolani and Tahrir al-Sham policies in Idleb after their fighters shot a civilian dead during a demonstration refusing the opening of a commercial crossing with the regime.

Protests against Tahrir al-Sham broke out in a number of villages and cities across Idleb last month, with demonstrators chanting “Idleb is free…get out, Jolani!”

Jolani’s recent movements and increased activity come as Tahrir al-Sham realizes its popularity is low, especially after the latest battles in Idleb, in which the group appeared weak and unable to defend the areas under its effective control, according Abbas Sharifa, a researcher who studies Islamist groups.

According to Sharifa, Tahrir al-Sham, “has realized through a number of indicators that its popularity is low, which prompted the group to think hard and work on two levels: first, returning and adhering more to popular activities, and second, investing in political rehabilitation to ensure Tahrir al-Sham’s future presence and authority.”

Sharifa attributed Jolani’s frequent appearances to an, “attempt to communicate with all sectors of society and broadcast his public meetings as a clear message that he still exists and still has popular approval, and that any conflict with Tahrir al-Sham is a conflict with the people.”

Jolani is searching for popular legitimacy and social backing to help him stay in place, because he knows that any breakdown of his social roots means easy disintegration, Sharifa said. In his view, the Tahrir al-Sham leader is working to communicate, perform services and solve residents’ problems.

According to Sharifa, Jolanini is trying to search for personal legitimacy. “If he acts as an institution, like what is always promoted in talk of the existence of the government (the Syrian Salvation Government), then problems must be solved,” Sharifa said. “The Salvation Government is the one holding the notebook and pen, not Jolani, who is looking to rebrand himself as a person and not an institution.”

This comes as Jolani changes his speech, as he indicated in an interview with International Crisis Group in February that despite his ties to al-Qaeda (via Jabhat al-Nusra), he vowed not to use Syria or any other faction as a launching point for foreign operations, and to focus on fighting the Assad regime and its allies.