Syrian children who lost their parents are being forced to abandon their education and take up physically demanding jobs writes Al-Monitor. 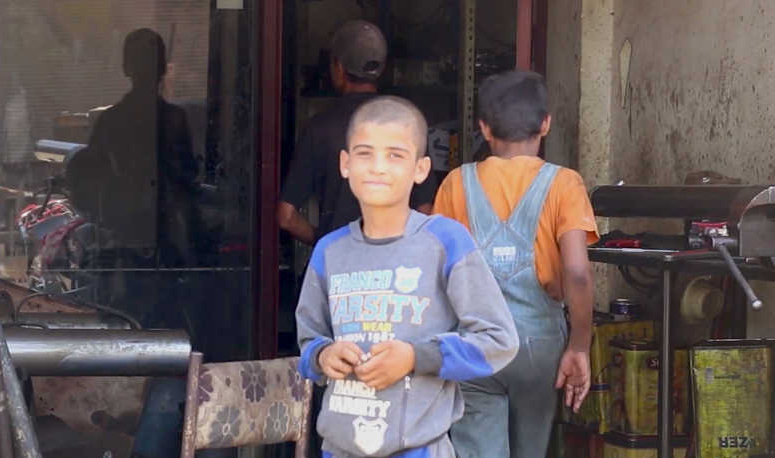 The phenomenon of children working for long hours in terrible and exploitative conditions has increased in the city of al-Shadadi, 60 kilometres south of Hassakeh province in northeastern Syria, as it has in other cities in the Syrian al-Jazira area during the war, which has entered its ninth year.

Sohaib Jaber, 13, has his spices laid out on the pavement from the early hours of the morning, which he sells for 10 hours continuously to provide for his family.

Jaber told Al-Monitor that he had become the sole provider for his mother and three siblings after his father was killed by the Islamic State (ISIS) when it occupied the town in May 2014. He is one of hundreds of Syrian children who have lost their fathers in the Syrian war. Many of them have been forced to leave their studies to search for work to provide for their families in light of the deteriorating living conditions for Syrians and the rising prices.

Two streets over from Jaber stands Mohamed Hussein, 14, in front of a grilled meat stand at a restaurant. Speaking to Al-Monitor, he said that over the last five years he had practiced a variety of professions, and that his work in the restaurant was exhausting and long and that his shift begins at 8am and then ends at 9pm. He grills meats and cleans the restaurant and cleans plates and gets a weekly wage of 5,000 Syrian pounds—which is today worth about five dollars. Hussein’s grandmother regrets burdening her grandson with the responsibility of providing for her and his siblings after his father disappeared at the hands of ISIS, with the whereabouts of his remain still unknown. Their mother married another man and left the children, saying: “I don’t know what I would do if not for the wages my grandson earns. Even if it is a little, it secures us some of our basic needs, as well as getting some meals.”

Hussein expressed his desire to study, but said that it was impossible to go back and finish his schooling after leaving it. He did not finish primary school, and he added that his peers from school were now in the third grade.

An activist in the Doz organization for children in the city of Hassakeh, who asks not to be named, told Al-Monitor that there was a rise in the rate of children working in professions above their physical capacity. She said there was a lack of precise statistics of their numbers and that they were being exploited by employers in light of the lack of care for them from any official agency or charity.

Regarding the reason for this, she said: “The consequences of the war the country is undergoing, especially the economic conditions, have a major role in this issue. The Islamic State took control and governed the educational process.” She also pointed to the negative role played by some parents and their influence on their children going to work instead of going to school. She added that most of the work done by children was exhausting and did not accord with their weak physical capacities. Some were working as mechanics and repairing cars and transporting goods, all of which requires considerable physical strength. She said that this affected their health and the education process and caused them to lose their futures.

Despite the schools opening, the rate of children working has not diminished, while the number of them that are illiterate has grown for reasons which the Shadadi local council member Khalil Kheder told Al-Monitor are due to, “the period when ISIS controlled the town and arrested and killed civilians, and closed most schools and opened others in which its curriculum was taught, serving and extremist ideology, which led to a higher rate of children working.” He added: “Many families lost their only breadwinner, some of whom were executed by ISIS or arrested. Some of their fates are still unknown. So children bear the responsibility for caring for the family. Some families were so afraid their children would learn ISIS’ extremist ideology, since the group controlled the educational process, that they prevented them from attending school. Instead, they preferred that their children work in jobs that exceed their physical abilities or kept them at home, which increased the rate of child labor in the city, so the illiteracy rate increased with it. We still have no accurate numbers in this regard.”

Regarding the measures taken by the council to end this, he said: “We cannot prevent children from working and force those whose families depend on them to secure a living to attend school. Many of them are also far behind in school compared with their peers who stayed in their studies.”