Questions are being asked about what role, if any, the Syrian intelligence agency played in the assassination of Soleimani reports Zaman Al Wasl. 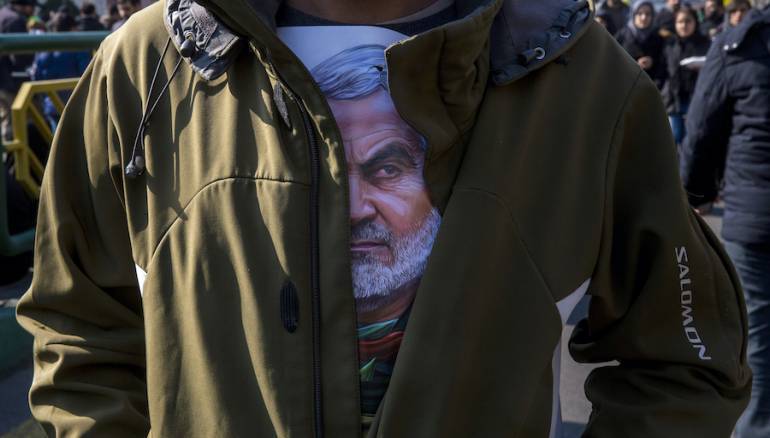 The death of Iran’s top General in a US airstrike on Friday has sparked speculation among Syrians about the role of the Syrian intelligence, as the last stop of Maj. Gen Qaseem Soleimani was in Damascus before landing in Baghdad.

Monday’s visit of Ali Mamlouk, the head of the National Security Bureau, to convey Bashar al-Assad’s deepest condolences to Iran’s Supreme Leader Ali Khamenei has recalled an Arabic proverb about the man who kills and then attends his victim’s funeral.

The plane in which the head of Quds Force arrived in Baghdad belongs to Cham Wings Airlines, owned by Assad’s cousin Rami Makhlouf. A lot of people are wondering about how the US knew of his arrival in Baghdad from Damascus, and more specifically whether the regime had any role in leaking the information.

According to security sources, Mamlouk was able to build a strong network of relations with all global intelligence agencies, including with Israel, the US, France, Britain, Turkey, Egypt, Saudi Arabia, and others. In fact, despite the tense political relations between the two countries, Mamlouk, unsurprisingly, did not cut his contact with the Turkish intelligence agency during recent years.

The sources said that, “He was and is still working with the CIA, since the US invasion of Iraq. He had sent dozens of Mujahideen from Syria and other Arab and Muslim countries to Iraq through Syria, but he then informed the CIA of their movements.”

Whether it is assassination, killing or the arrest of a prominent leader in the Arab world, Assad’s regime is always in the middle of the fray, working as a double agent for the benefit of the parties with the most international weight, even if the target is one of its supporters. This is a list of names that the regime is suspected of being behind their assassination or arrest:

Abdullah Öcalan: the leader of the PKK, who was been sheltered by Hafez al-Assad for many years, and caused a great tension with Turkey that almost led to a war, forcing Assad, with Egyptian mediation, to sign the Adana Agreement. Öcalan was deported in 1999, and that was when Turkish intelligence and Mossad caught him, in Kenina, and transported him to Ankara.

Imad Mughniyah: was an important Hezbollah figure. Israel used to call him the “untraceable ghost”. He was assassinated in a car bombing, in February 2008, in Damascus, following an elaborately planned CIA/Mossad operation.

Jihad Imad Mughniyah: entered military action with Hezbollah after the assassination of his father. He has a strong relationship with Hassan Nasrallah and Qasem Soleimani. In January 2015, Israel eliminated him by targeting a car carrying him and six other leaders in south Damascus.

Mostafa Badr Eddin: was assigned as Imad Mughniyah’s deputy and his successor. He was killed in May 2016 in mysterious circumstances at Damascus International Airport. Some accuse Qasem Soleimani of killing him.

Fawzi Ayoub: a famous Hezbollah figure, was detained in Israel after trying to enter with a forged American passport. He was freed two years later in a prisoner exchange deal with Hezbollah. After entering Syria he was assassinated near Aleppo, in May 2014.

Sameer al-Kuntar: spent 30 years in captivity in Israel, and was freed in an exchange deal with Hezbollah. He was assassinated by Israel in December 2015, by several drone missiles fired at his house on the outskirts of Jaramana east of Damascus.

Tunisian Engineer Mohamed Al-Zawary: one of the prominent engineers of Izz al-Din al-Qassam Brigade was assassinated in 2016 by Mossad in Tunisia. He was adopted by the Syrian intelligence service and started working to manufacture drones at the Syrian Scientific Research Center.