A new report has highlighted the violations committed against women in Syria and the parties involved in war crimes and crimes against humanity reports Jisr. 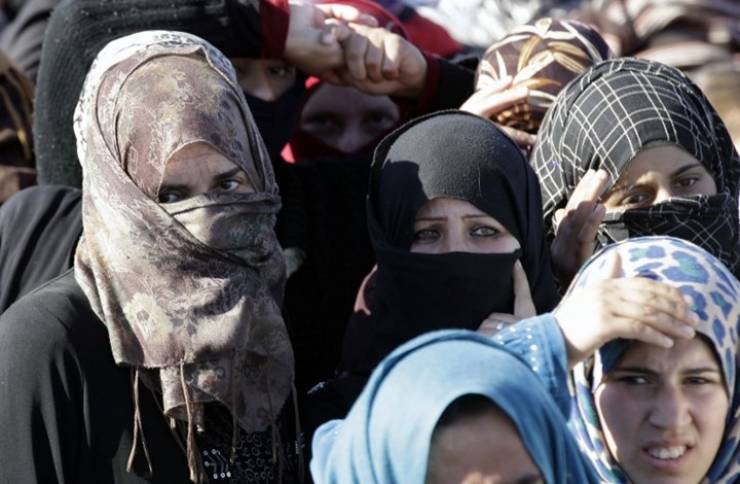 The Syrian Network for Human Rights said in a report issued on International Day for the Elimination of Violence Against Women that violations in Syria had reached the extent of crimes against humanity and that the international community must intervene to protect women in the country. It said that 28,076 women had been killed in Syria since March 2011, about 84 percent of them at the hands of regime forces and their allies.

The report documented the number of violations carried out against women by the main active parties in Syria, from March 2011 to Nov. 25, 2019. The report was based on the accounts of survivors and offered 11 accounts from survivors of various forms of violations or the families of victims or witnesses to the incidents.

The report documented the deaths of 28,076 women at the hands of the main active parties during the period it covered. Syrian regime forces killed 21,856 of them, while Russian forces killed 1,479. International Coalition forces killed 959, while armed opposition factions killed 1,307.

According to the report, at least 10,363 women were still being detained or had been forcibly disappeared by the main parties in Syria from March 2011 to Nov. 25, 2019, including 8,412 by Syrian regime forces and 919 by armed opposition groups, 489 at the hands of extremist Islamist groups, 426 at the hands of the Islamic State (ISIS), and 63 at the hands of Hay’at Tahrir al-Sham, and 543 by the Syrian Democratic Forces (SDF).

The report said the number of women who died under torture had reached 90, 72 of them killed by Syrian regime forces, 14 by ISIS, and two by the Kurdish-led SDF, and one by the armed opposition and other groups.

The report said that the Syrian regime had carried out sexual violence as an active weapon to deter society, and this has become a phenomenon with serious consequences for victims, especially women and girls, as well as their families and communities. Victims have not dared to declare these violations in many cases out of fear of revenge, or shame or fear of how society will see them.

The report said that the SDF had carried out, through its indiscriminate bombardments and killings, acts that constituted war crimes, and that all these crimes had been glaring violations of international humanitarian law. The group had also carried out arbitrary arrests, forcible disappearances and compulsory conscriptions.

The report recommended that the International Coalition investigate incidents in which women have been victims in particular and called for pressure to be put on its allies in the SDF to stop the conscription of children and to stop kidnappings and arrests.