A Russia news outlet has published an article about regime head Bashar al-Assad, in which it fawns over his choice of food and his rejection of Western ideas writes Brocar Press. 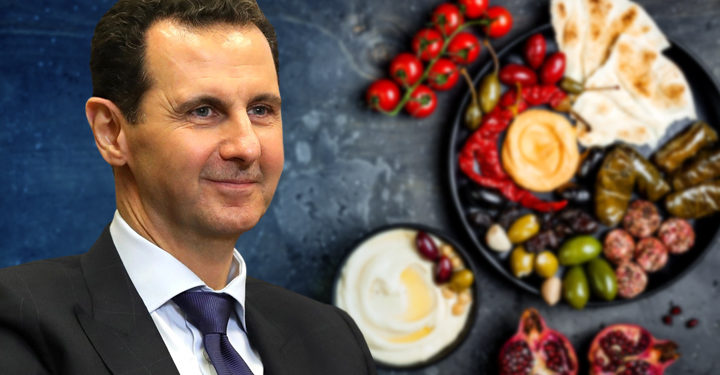 Exceeding even regime media in its latest trend of promoting Assad and his regime, the Russian Tsargrad TV channel published a story discussing the meals preferred by regime head Bashar al-Assad in his capacity as a “respectable national leader,” and addressing his upbringing and how “the Alawite origins of the West’s main adversary” overcame his Western education to rid him of any inclination toward the West—even at the dining table.

The article presented what it called “hot dishes from Damascus,” a menu from official reception parties, and “the humble table of the West’s main rival [Assad] in the atmosphere of his Middle Eastern home.”

The author of the article addressed Assad’s “demure” origins, saying, “Syrian President Bashar al-Assad was born into a family of Alawites mixed between the Kelbiyeh and Hadaddin clans and grew up in Damascus keeping strictly to its customs and traditions,.” In its marketing article, the writer said with sympathy that the regime head “was from his youth destined for political action,” contrary to the truth known by those close to the Assad family—and the Syrian people—that Bashar had been far away, or kept far away, from political work out of a desire for the spotlight to shine only on his older brother Bassel, known to the Syrian street as the heir to Syrian authority.

The writer said that before the “cub” had reached five years old, “his father reached power in a military coup, and his older son began to gain power behind him. But fate willed that Bassel would die unexpectedly in a car accident in 1994, forcing Bashar to return from England and to join the Military Academy in preparation to take over as supreme commander of the armed forces and as president.”

Notably, the article, which clearly tried to raise Assad’s shares in the eyes of Russian citizens, boasted shameful facts of his history and the way he reached power, saying: “To do that (inaugurate Bashar) the Syrian parliament in 2000 changed the constitutional specifically for Bashar and reduced the minimum age to run for president from 40 to 34.”

In an attempt to market and promote Assad, the article, published on the Tsargrad website—which has a nationalist, Orthodox orientation, hostile to liberalism and the West—presented Assad’s taste in food as evidence of his loyalty to Middle Eastern traditions and his lack of influence by “Western innovation.” It said that despite his Western education, as he was raised in a French-Arabic school, and marrying Asmaa al-Akhras, who holds dual British-Syrian citizenship, “his Alawite roots,” Damascus traditions, the military system in the country and “the patriotism rooted in him, and the necessities for any country’s ruler, stripped the leader’s heart of anything Western he had no need for—not only on the level of political, but also at the table.”

The article said: “However, it cannot be said that Bashar al-Assad is conservative.” It said that at a reception party with Vladimir Putin in 2015, the president partook in “the famous Russian cold plates” of raw herring under a coating of shredded beet, and that he also enjoyed the Russian Olivier salad.

The author here said that even though he may not have liked Russian dishes, he ate them “to express his respect for the Russian leader and Russian culture,” adding that “in 2017, in Sochi, Assad ate Black Sea fish and caviar from far eastern Russia,” something which in the author’s view evoked compassion, because, “the conservative Middle Eastern leader, loyal to the cuisine of his mother country” was forced to eat caviar “out of respect and no more,” ignoring and forgetting—and perhaps not knowing—that millions of Syrians are unable to find anything to eat, while the president himself is “forced” to eastern fish and caviar.

The author of the article said that in normal life, “all respectable presidents, such as Vladimir Putin and Bashar al-Assad” enjoy national dishes as prepared by their mothers and grandmothers, “except Donald Trump, of course,” adding that Assad, as a real Syrian, preferred “warm” dishes.

Regarding what Assad enjoyed in his private life, the article said: “At home, the president enjoys a typical national dish of eggplants prepared by his wife Asmaa. It’s one of the main dishes in Syrian cuisine, and is called Baba Ghanouj.” It said that this dish was easy to prepare, and that “of course if the Syrian president hosts his Russian counterpart, falafel will have to be added to the menu.”

In a veiled call for Syrian refugees to return home, the writer cited the “Syrian expression,” saying “The inhabited house is a hundred times better than an empty house,” hoping that Syrians can return to their homes as soon as possible, forgetting that Assad’s bombardment has destroyed the homes of millions and reduced them to rubble and that most Syrians are afraid to go home out of fear of the security agencies that have killed hundreds of thousands and disappeared them into prisons in order to keep Assad on the throne.