Thousands of children in Syria, who have lost the main breadwinner in the family, have been forced to abandon their education and seek employment reports Brocar Press. 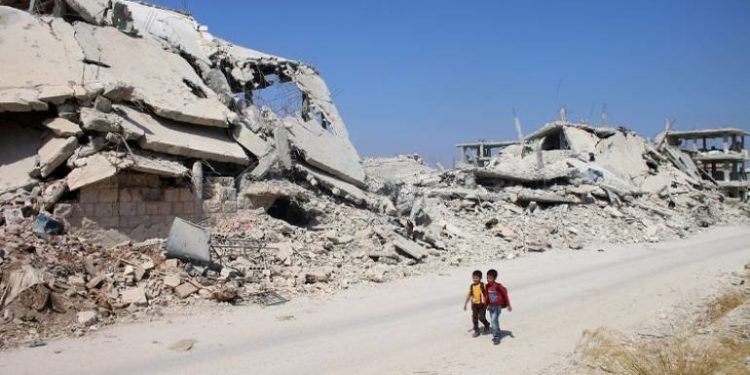 Umm Qusay’s life has become very bleak since the regime took her husband to one of their prisons. She now has no information about him.

Qusay, who is in her forties, and whose features are marked with signs of frustration, says that the war has taken the most precious thing she had and that her main goal now is to educate her four children, whose paths to education have been cut off. Her second son, Omar, who is 16, has been forced to leave school to look for work to help the family in securing some of their needs.

The bereaved woman, who sacrificed her own diploma to care for her family, said she had been the wife of a successful engineer, who had been able to provide a dignified life to the family throughout their marriage of 20 years. But their happiness did not last long when the war stole it away.

She added that she will never forget the day that regime security forces stormed her family’s house and took her husband and son, Qusay, who is 18, with kicks and insults, to an unknown location. Every attempt and mediation to find out where they are or what charges they face has failed.

She said that the family had spent all their money, on living expenses and attempts to search for her arrested husband and son. She said that no matter how much she paid to find uncover the fate of her husband and young son, it all come to nothing.

She added that her financial situation has quickly gotten worse, which forced her to regretfully agree to allow her son Omar to leave school and look for any work that could help them.

Omar says: “The war made us grow up prematurely. Instead of being in classrooms, we’re on the streets and in the fields. We’re looking for any work to make ends meet.” He said that he left school because of the pressure to make money and now saw himself as being responsible for securing his family’s living after his father and older brother were arrested.

He said that he would take any work that was available, and that he had done day laboring removing house rubble, as well as agricultural work, portering and other hard labor.

He said: “What’s important is that I find an honest source of income for my family to live off.”

Thousands of children from Daraa live in situations like Omar’s. Millions of Syrian children are out of school after the war stole their childhood and turned them into young men, shouldering major responsibilities. They are the children of martyrs, or the children of prisoners in the regime’s jails, who have been forced by economic circumstances and the need to live with dignity to sacrifice their education.

Diaa, 16, says: “I had hoped to go to school, since I was a good student. My dream was to become a pilot, and take part in liberating my country from the Zionist abomination. But the events that I witnessed and lived through made me hate war, killing and destruction.”

The regime’s war against the Syrian people cost him his father and uncle and a number of relatives who were either killed, arrested or forced to flee. This gave him the responsibility of looking for work at an early age in order to provide for his family, who had no other breadwinner. He said that he was the oldest in his family, and the only provider for his female siblings after his father was martyred.

He added: “One of the family members needs to make a sacrifice in order for the others to survive the difficult conditions the country is enduring.”

Abdel Salam al-Falah, 18, said: “It’s true that I was able to develop my father’s business in trade and secure a comfortable life for my family in these tough conditions despite my young age—but that was at the expense of my education.”

He added: “I hope to get a high school diploma, which I can sit this year as a free student and then continue my education, as all the money in the world cannot replace good qualifications.”

UNICEF reports have indicated that about 2.8 million Syrian children are not in school, including 700,000 in countries of refuge.

The report said that this amounts to a third of Syrian children—in an indication of the extent of the tragedy that Syria will witness in the future, and which will affect various aspects of economic, cultural, social and behavioral life.