The formation of the National Front for Liberation changed the situation on the ground in northern Syria, but who is leading them. Enab Baladi explains. 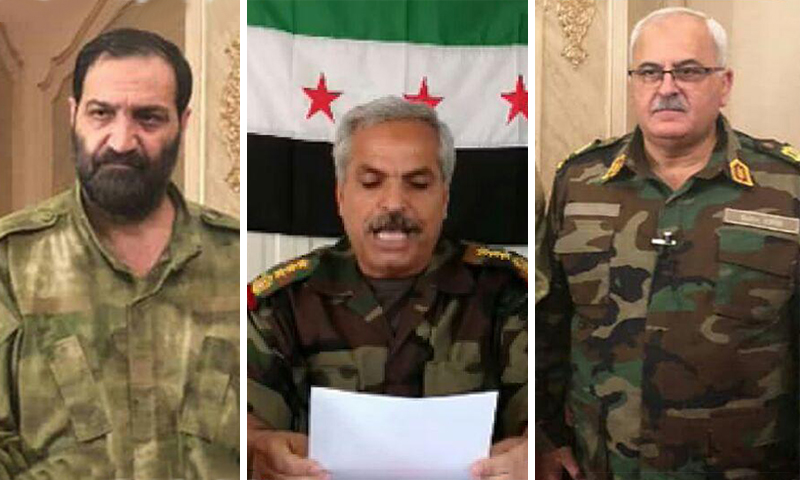 The step taken by the Free Syrian Army (FSA) to unite and merge came late, and so its influence on the ground will be limited to the northern Aleppo countryside and the Idleb governorate, while the central decision for any move the rebel groups want to make will rest with Turkey, which is its main engine and the primary party behind the decision to unite.

The step is being discussed as an “historical moment” the consequences of which are not yet clear, whether in terms of the military assault that Moscow has hinted at for control of Idleb, or the change of the map east of the Euphrates, where Ankara is trying to set up a safe zone across the southern border.

The merger was completed after the National Front for Liberation, whose formation was declared in May 2018, with the merger of a number of military units operating in Idleb province into the “National Army” operating in the Aleppo countryside and composed of three corps.

Regarding the new structure of the National Army, the Syrian opposition coalition, with which the Interim Government is associated, said on Twitter that the National Army would be composed of seven corps including 80,000 fighters after the National Front factions joined.

The structure is composed of a defense minister and a chief of staff, Major General Salim Idriss, and the deputy chief of staff from the Euphrates Shield and Olive Branch areas (Aleppo countryside), Brigadier General Adnan al-Ahmar, who will oversee the first three corps, alongside the commander Fadlallah al-Hajji, a prominent commander close to Turkey, who has been designated four corps in Idleb.

Major General Salim Idriss was born in 1958 in the town of al-Mubarakiya in the western Homs countryside.

Idriss mastered three programming languages and obtained a degree in electronic engineering from Aleppo University in 1982. He also holds a masters degree in information technology from the High Academy for Transport Sciences in Germany, 1987.

Idriss became the minister of defense for the Interim Government after the position had remained vacant after the resignation of Jawad Abou Hatab, who began serving as the government head in March.

Idriss was known during his time heading the FSA general staff for his close relations with foreign and American officials, who provided military support, ammunition and military equipment.

Fadlallah al-Hajji was appointed commander of the National Front for Liberation after its formation in March 2018. He is the general commander of the Faylaq al-Sham group, known for their major support from Turkey.

Hajji is currently the deputy chief of staff for the Idleb region and leads four corps affiliated with the National Army.

Hajji is a defected colonel from Assad’s forces and he was appointed last November as chief of staff of the National Army, which was composed of FSA groups in the northern Aleppo countryside.

He was born in the village of Kafr Yahmoul in the northern Idleb countryside and defected from the Syrian regime at the end of 2012 and then joined the Revolution Shield brigade as deputy commander to Major General Colonel Mustafa Abdelkareem.

Commanders in the FSA told Enab Baladi that the commander was a “good military man”. He had later served as commander of the military operations room in Idleb and had been agreed upon by all rebel groups because he was active and committed to military operations, until he joined Faylaq al-Sham and took over command there.

He is from the city of al-Rastan in the northern Homs countryside. He defected from the Syrian regime in March 2012 with his son, Lieutenant Mohamed Khair Adnan al-Ahmed, after he had served as head of the Reconnaissance Branch in the northern region command.

Ahmed has in recent years moved through various military posts. He had been deputy defense minister in the Interim Government in the northern and eastern Aleppo regions.