In light of the collapsing Syrian pound and the dire economic situation, the Syrian government is using the assets of businessmen to fund the state writes Al-Modon. 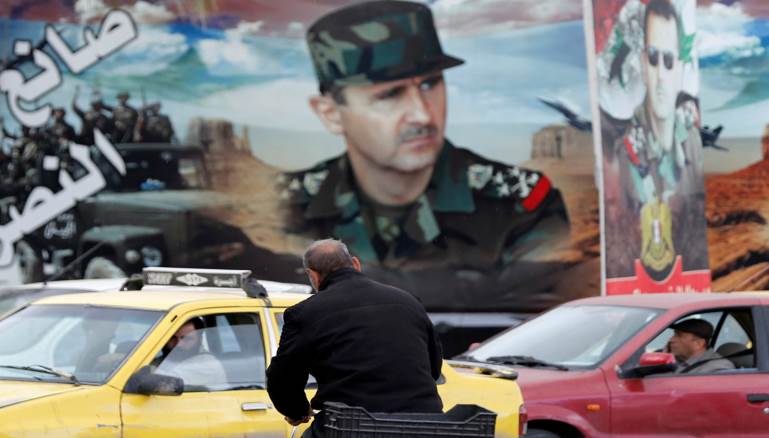 Prime Minister Imad Khamis has offered a surprise reading of Syria’s economic situation and its losses due to the country’s ongoing crisis. Khamis said in a speech before parliament that the assets of the Syrian Central Bank shrank over the first years of the crisis and that daily oil production fell from 380,000 barrels per day to zero.

Khamis added in his speech at the start of the 11th session of parliament that the rate of planted ground had shrunk and become very limited, while tourism had been directly impacted by the war and its income was zero. With regards to electricity, half of the stations had been systematically destroyed, and the same was true for transport lines and the rest of the infrastructure that had been targeted directly.

As a result, Khamis said that the government needed 200 million dollars a month for the oil tankers that Syria needs, as well as 400 billion Syrian pounds to restore the gas sector to operations. This is in addition to all the other important sectors that also need budgeting and which should be provided, including education, which is about 400 billion pounds of the current budget.

Regarding the exchange rate, Khamis said that, “the government has made a decision that it has not violated since 2016, to stop the policy of direct intervention in the foreign currency market.” This intervention policy, according to Khamis, “previously caused the attrition of no small part of foreign currency reserves and encouraged speculators to engage in more speculative activity.”

To resolve this, the regime is working to freeze the assets of major Syrian officials and businessmen in exchange for them giving up a portion of the wealth they acquired over the years of Syria’s war.

Reports about the freezing of the assets of former ministers and businessmen has spread. After the case of the previous Internal Trade Minister, Abdullah al-Gharbi, a decision was issued by the Finance Minister to freeze the movable and immovable assets of the former Education Minister, Hazwan al-Wazz, and his wife. There were also reports of the detainment of Deputy Education Minister Said Kharasani and others suspected of being involved in corruption amounting to about 350 billion pounds.

Leaks have said that the businessman Baraa Qatarji, owner of the Qatarji Company, has fled the country after an arrest warrant was issued against him.

Qatarji is considered to be currently Syria’s biggest oil trader and he acted as a broker between the regime and the Islamic State, selling oil, before sitting at the top of the prominent oil firm BS Company, which is on European Union sanctions lists.

It also appears that previous reports about the arrest of the Syrian ambassador in Romania, Walid Ali Osman, during a visit to Damascus to take part in the Damascus International Fair along with a delegation of Syrian businessmen, were not correct. Osman extended his service as ambassador for another year, from Sept. 15, 2019 to Sept. 14, 2020, according to Snack Syria. The text for the extension had the number 247 for the year 2019 and was issued by Bashar al-Assad. Osman is the father-in-law of Rami Makhlouf, Assad’s cousin. His extension comes after he reached 67 years of age, and therefore he needed an extension because he has surpassed the legal age. A short while ago, the service of the Syrian ambassador to Russia, Riad Haddad, was also extended.

This major shift in the exchange rate confirms a lack of reserves of foreign currency or gold to regulate the price, which is a serious indicator that will contribute to a lack of faith in the pounds, which has already been subjected to successive declines.

The head of the Securities Commission, Abed Fadliyeh, said that the dollar price on the black market was set according to supply and demand factors, which in turn are set by general market conditions, the military and security situation, the political climate, and future investment and security expectations, as well as factors of fear or optimism about the near future and herd behavior, with one person following the other.