The brutal assult on Idleb by regime forces has pushed many families into the camps for the displaced, where the quality of life is very low reports Al-Araby al-Jadeed. 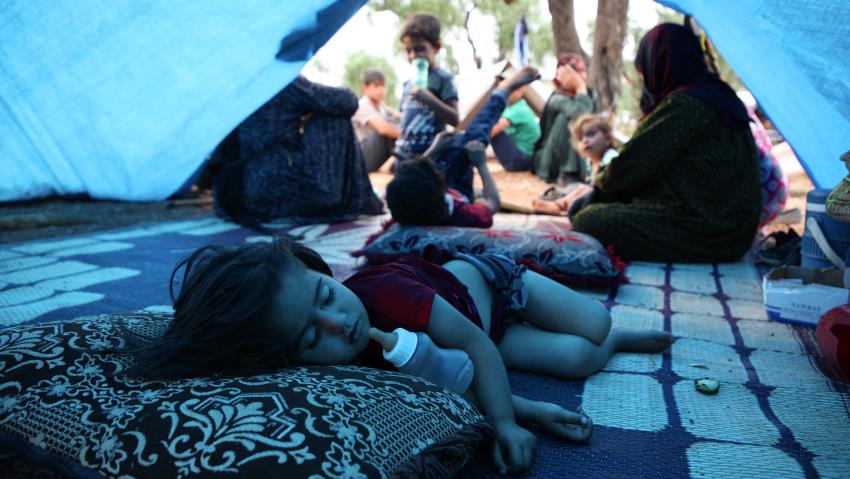 Before the sun rises every morning, Hussein Mohsen wakes up in a small tent he shares with a friend and heads out in search of work. The father of two routinely returns to his camp in northwest Syria after dark, defeated.

Finding a job at a nearby farm or shop is all but impossible. This part of the country is home to hundreds of thousands of internally displaced, out of work Syrians just like him.

Without a steady income, Mohsen can’t afford to buy bread or lentils for his children. Instead, his family relies on the generosity of relatives and neighbours in Sarmada who pass along their extra food.

Not long ago, Mohsen was earning a comfortable salary serving in the Syrian army. But after getting caught trying to defect, he was thrown into the regime’s notorious torture prison Sadnaya. Since his release in 2014, Mohsen and his family have moved from city to city, fleeing military offensives first in Hama and now in Idlib.

“Honestly, sometimes I wish I were still in jail and doing nothing,” he said. “I’m carrying a heavy burden here.”

In late April, Syrian President Bashar al-Assad set his sights on retaking Idlib province. The northwestern enclave bordering Turkey is the last major pocket of territory still in the hands of the opposition after eight years of war.

The area was meant to be protected by a de-escalation agreement reached by Turkey and Russia last year that was never fully implemented. In recent months, government airstrikes have bombarded hospitals, schools and other residential areas in Assad’s quest to take back every last square inch of the country.

According to the United Nations, more than 1,000 civilians have been killed in the latest onslaught, including 304 children. UN human rights chief Michelle Bachelet blamed nearly all the recent deaths on regime forces and their allies.

Both Moscow and Damascus claim they are targeting extremists operating in the area, including the powerful Hayat Tahrir al-Sham (HTS) group.

But Idlib is also home to some three million civilians, roughly half of whom ended up in the province after fleeing regime offensives elsewhere in Syria. According to the UN, more than two thirds of those currently living in Idlib are women and children.

As the fighting has escalated, an estimated 500,000 Syrians have fled their homes. Most of the displaced have gone north to the camps and olive groves dotted along the Turkish border.

“The living situation is very difficult,” said Hussein Warda, manager at a camp in Deir Hassan, a town situated on the border with Turkey. “It is not suitable to live in.”

The sprawling camp, which he says is designed to fit 10,000 people, is hosting nearly ten times that number.

“There is no space between the tents and no privacy,” he says. “[They’re] so close to each other that people can hear each other’s secrets.”

After months of little progress, regime forces rapidly advanced on rebel-held Idlib and parts of northern Hama in August. Government troops captured the strategic town of Khan Sheikhoun last month, which had been under opposition control for the past five years.

The fighting has slowed since Russia announced a unilateral ceasefire in late August, but civilians are wary such a truce will hold. Earlier in August, a similar ceasefire collapsed within days.

“We can’t stand the sound of warplanes and missiles,” said Randa Ali, a midwife living in Deir Hassan.

“I have a seven-year-old child who is naturally afraid, and always repeating, ‘Mum, I don’t want to die.'”

Ali escaped the bombings in her town for the relative safety of the tent camp. But now she, her husband and four children must contend with snakes, insects and poisonous scorpions that can crawl inside their tent at night.

Food shortages in the camp, coupled with a lack of clean toilets and safe drinking water, has Ali worried for her children’s health.

Desperate for a way out of the camp, she’s considered paying a smuggler to bring her family across Turkey’s closed border.

Traveling illegally is a last resort – the harrowing journey wouldn’t come without its risks and can cost as much as $1,000 per person.

But Ali has nowhere near enough money to pay a smuggler. Her savings are running out, and she made just $63 last month delivering babies in the area. She’s reluctant to ask for donations from friends and family, all of whom are in the same financial situation.

“I lost my brothers to this war.” she said. “Now I want to preserve the lives of my children.”