Children in Syria have witnessed eight years of conflict and have even taken part in the fighting, but now the task of rebuilding society begins writes Ana Insan 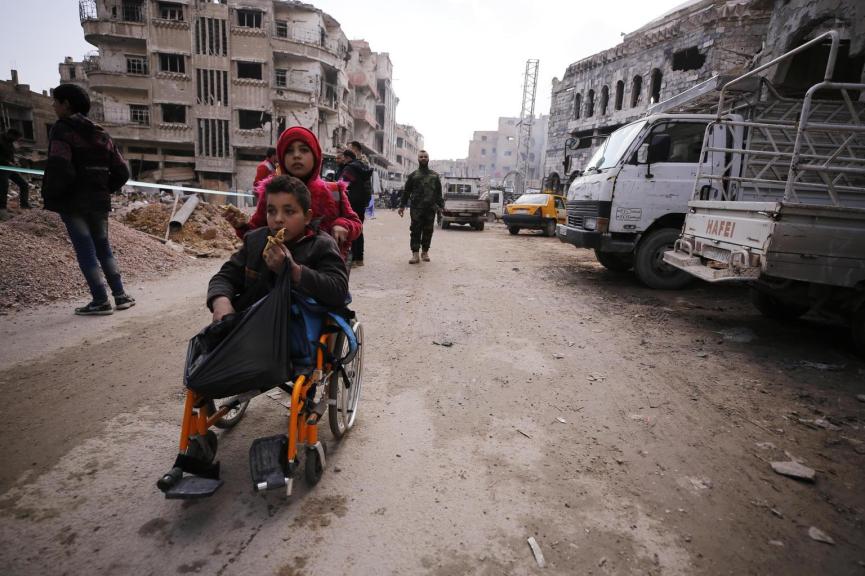 Feb. 27, 2011, was no an ordinary day. On that day, 18 school boys from the city of Daraa were arrested by the Syrian security services. The arrest of these boys sparked the revolution in Syria. The regime’s unprecedented violence was the beginning of the Syrian Holocaust, which killed hundreds of thousands of Syrians, many of whom were children. Over the years, they became fighters, were displaced or forced to work, rather than being students.

Mazen, a pseudonym, was one of the children from Daraa who witnessed the regime army storming his village and carrying out field executions of civilians at the beginning of the Syrian revolution. His memory recorded horrific details of this attack, which forced a number of young survivors to flee to other areas for fear of indiscriminate arrest.

Mazen, from Daraa countryside, was only nine when the army stormed his village. When he was 13, he joined one of the armed factions fighting the Syrian regime. He started out by monitoring checkpoints but in time he participated in the battles, and even killed regime soldiers and fighters from the militias. He tells Ana Insan that he executed a regime corporal who was involved in the storming of his village. He said he recognized the man immediately and publically executed him in revenge for his village.

Today, Mazen is 18. He refused the reconciliation agreements when Daraa fell to the regime and moved to Idleb to participate in the battles against the regime’s army and its allies. If he was given a chance, he would, “find everyone who took part in the attack on my village and kill them.”

In the province where Mazen comes from, or the so-called “reconciliation areas”, there are many children still under the age of 18 who took part in the fighting and took up arms, including those who actually killed and fought in military groups. One of them is Ahmad, now 16, who participated in several battles. He was a regular fighter in one of the military formations, and has remained in his area, refusing to go north to Idleb. Ahmad tells us his story. “I am from a family whose members were either killed or imprisoned. Taking up arms was my only option for revenge, and I will continue as long as the criminals are still alive.”

Children taking up arms is one of the most serious issues facing the areas where fighting took place. The real problem now is how to rehabilitate these children and help them reintegrate into society, an option that is not currently available. Rather, the situation could be worsening as the reconciliation areas are suffering from security instability and the regime forces are keeping swarming communities in search of for wanted people.

“The living conditions are extremely difficult,” Fore said. “The destruction is widespread. The donor community has been generous but we need to stay the course. Their needs are enormous.”

UNICEF has called for children throughout Syria to be protected, and for efforts to be concentrated on repairing the social fabric which has been torn by years of fighting, but that is not enough given the lack of vision, the flaming war in the north, and the embers that are burning in more than one spot in Syria, especially in the south, where the voice of the people was suppressed by bombs and airplanes.