In the face of bleakness and suffering. Mohamed Jokhadar is using art to inject some life and hope into the Zaatari refugee camp in Jordan reports Zaman Al Wasl. 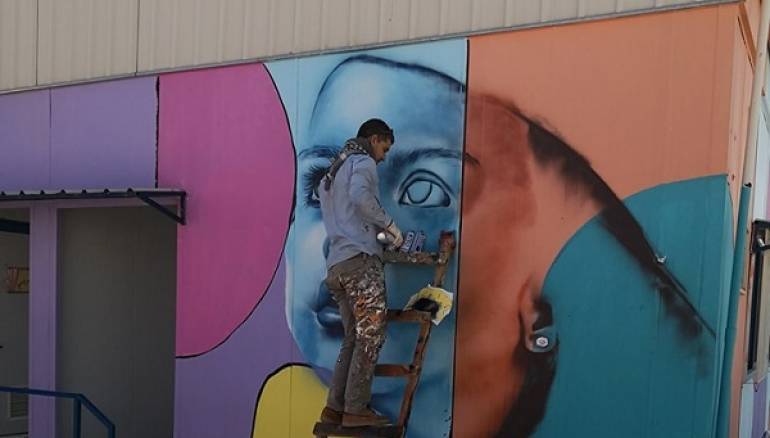 Everything in the Zaatari refugee camp on the Jordanian border is yellow and gloomy, the sand, the tents and the people’s exhausted faces. Only the graffiti of the Syrian artist Mohamed Jokhadar, which decorates the makeshifts shelters, tries to create joy and bring hope.

Six years ago, during the siege of Bab al-Sebaa neighborhood in central Homs city, Jokhadar, 33, fled to Zaatari refugee camp, seeking an escape from the daily bombing.

Jokhdar tried to go back to painting in the desert camp, but he struggled in finding art supplies, as they were expensive. However, he was able to overcome this problem by using wooden residues to make frames for his paintings and used leftover cloth from the tents. He labored, pouring his suffering into the paintings, documenting what was happening in the northern provinces of Aleppo, and Idleb, and the suburbs of eastern Ghouta, near the capital.

After a time in Zaatari, the graffiti artist started many artistic projects in agreement with the humanitarian organizations working within the camp, including drawing murals along the perimeter of the camp along with the sectors that included the project.

The 30-year-old artist painted several UNICEF sites in the Zaatari and Azraq camps. He ran special courses in the camp for a number of children. He is currently working with Mercy Corps, which integrates children with disabilities with non-disabled children in education, working with them to teach them to draw.

Jokhadar’s ideas draw on the surrounding reality, drawing murals on water awareness, education and heritage, and highlighting that, “the most pressing topics for him are heritage and the introduction of traditional inscriptions in several works.”

Jokhadar expressed his appreciation for the encouragement he received from those around him, seeing it as an incentive to continue this art, especially for the children as he always gives them the opportunity to draw what’s on their minds, conveying their dreams in the murals.

Because of the desert conditions in Zaatari and the factors of nature and time, Jokhdar’s murals do not last long as they are painted on a metal surface, but this – as he emphasizes— does not affect his enthusiasm, because he will redraw them, painting new themes.