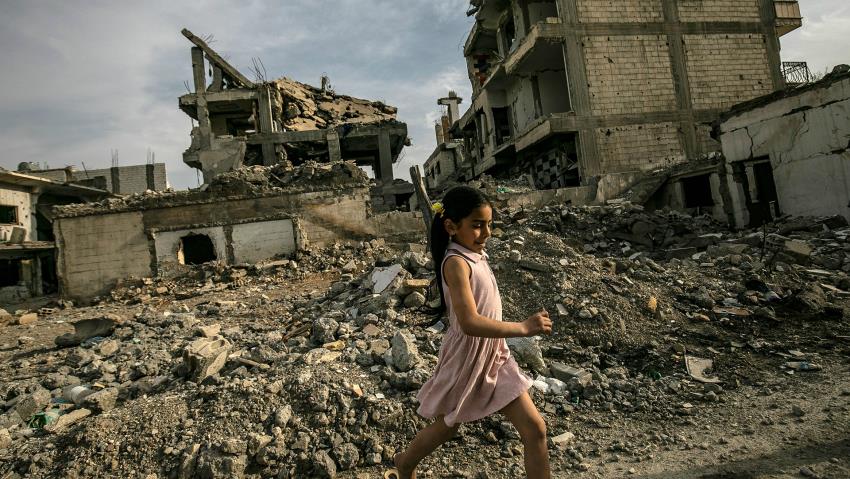 The civil peaceful movement that arranged demonstrations seeking a democratic Syria and striving for civilian’s freedom has now created a large space in the liberated area to emphasis on the civic values.

More than 500,000 people have been killed since the beginning of the Syrian conflict in 2011, which began after the Assad regime brutally suppressed peaceful demonstrations.

There was never any real representation for Syrians in local authorities and syndicates as most of these were controlled by people affiliated to the Assad regime. These were mainly corrupted with the regime using these bodies as a tool to strengthen control over the state.

Farouk Nashar, the media office manager of Kesh Malek, an organisation based in the Turkish city of Gaziantep that also operates a series of projects in rebel-held areas of north Syria, hopes to change this.

“Syrians are under a severe deterioration of freedom. They have lost all hope and the concept of ‘citizenship’ has utterly vanished,” he tells The New Arab.

“Due to the critical circumstances and continuous escalation of fighting, the main focus of most non-governmental organisations are to provide basic services,” Nashar adds.

“A lot of people have been left without real representation in the decision-making process, especially marginalised groups like the youth, women, and internally displaced people.”

The huge influence of weapons and deterioration of the economy exposed Syria’s young generation to child labour, armed recruitment, and early marriage.

Farouk explained that in order to contain these tragic outcomes, a long-term systematic intervention needs to be implemented in order to re-engage the youth as active members in the society.

In 2018, Kesh Malek launched a Youth Citizen Club in north Syria with aims to amplify the voices of the youth and help motivate them to be more involved in public life inside Syria.

Farouk noted that Kesh Malek’s long term vision is to work with enthusiastic young individuals who are eager to lead changing initiatives in their communities, while also supporting those who lack opportunities to help them express themselves and unleash their potential to lead their communities.

Samera Ali, a 16-year-old youth community leader at the Abzmo centre, joined last year and has since been training about advocacy, women’s rights, equality and social skills.

“Such initiatives are rare in Syria,” she tells The New Arab.

“I was thrilled to have the opportunity to open my eyes to different horizons and seek knowledge I wouldn’t have known anywhere else.”

“We visit local bodies, such as the village council, and speak to families to discuss what we want to change to help improve the society we live in.”

Samera adds, “When we talk, people listen to us. We noticed that many adults are not keen in tolerating things such as child labour or banning young girls from going to school and receiving an education.”

Farouk explains the structure of Kesh Malek’s initiative, which starts with building the youth’s capacity in advocacy and community mobilisation to then conducting several volunteer activities and campaigns.

He details how the group in the YCC, composed of eight females and seven males, identified the need for an elementary school for girls in the town, pushing this as their priority.

“We facilitated a series of meetings between the YCC representatives and all stakeholders in the Kafarnaha region (where the YCC is based) including speaking to provincial council representatives and female office directors. We witnessed a positive outcome, where people took part in the public sessions held in the town, with a lot of interaction by the elders of the community.”

Karem Hasn, an 18-year-old youth club member from Kafarnaha, says, “We were so proud and thrilled that our efforts resulted in a positive outcome. This definitely boosted our motivation and enthusiasm to continue this work and do more to rebuild our society.”

This success inspired more work and training by Kesh Malek, to support the youth with new materials and new skills including conflict analysis, peacebuilding strategies and dialogue planning.

“We as a youth want to contribute towards re-building our nation with a speedy post-war recovery. We want to achieve a free Syria where everyone is equal, has their own rights and faces no oppression,” said Samera, who also noted there is still a long way to go when it comes to early child marriages for girls.

“With such advocacy campaigns, we hope to get young females back to school and eradicate abuse against them so that they can develop as individuals, study and get married to who they want.

“Knowledge is power, and for us as young people here we need more training and experience to obtain full comprehension about solving social problems and how to discuss and convince elderly members of the community to support us and work with us, instead of marginalising and neglecting our role,” the 16-year-old adds.

Samera expressed that she will continue working to evolve herself and her community to recover from the war’s impact, regardless of how long it will take.

“I will not give up learning and trying to spread light and knowledge until we eliminate ignorance and have an educated, open-minded society,” Samera says.

Farouk adds, “We believe that the youth can be positive changemakers in the future of Syria. By keeping them unrepresented will continue to worsen the situation in Syria in both the short-term and long-term process. This where our role as a civil society organisation stands, to heal the community.”