Faculty members and students alike have decried the arrest of members of staff and demanded that changes be made reports Al-Modon. 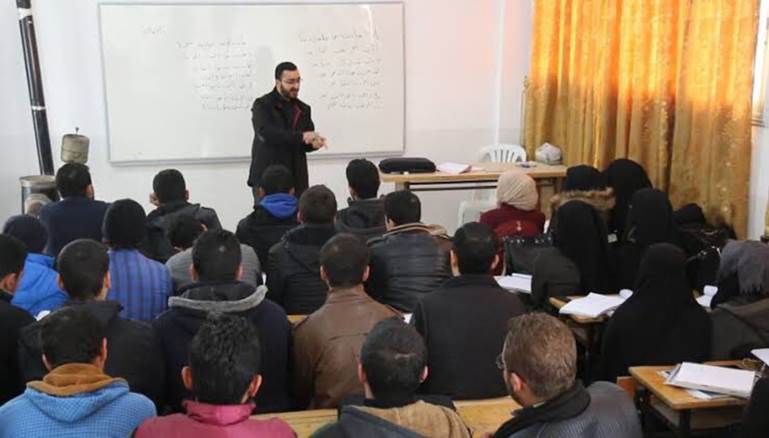 The head of the Free Aleppo University, Yassin Khalifa, issued a decision which agreed to some of the demands from its faculty while ignoring most of them, according to Al-Modon’s correspondent Mohamed al-Khalaf.

Twenty-eight members of the faculty had submitted a list of demands, and threatened to resign if they were not implemented, following the state of turmoil the university is experiencing. The chaos began with the arrest of faculty member Mohamed al-Omar and his disappearance on charges of insulting Abdelbasat al-Sarout. Despite the fact that he denied all charges in whole and in part, the university teacher is still missing with the “security” in Azaz.

This was followed by the “arbitrary, unexplained dismissal” of the university Vice President, Emad Khatab. A source at the university told Al-Modon that the dismissal of the two professors came after complaints from some students against them. He added that, “It’s clear that these complaints were malicious and that an influential body was behind them and using them as a pretext to implement a specific policy at the university. But we don’t know yet who this is and what their aim is.”

The Free Aleppo University opened in 2015 in accordance with a decision issued by the head of the Interim Government, including 14 faculties with various specialties, and with 5,000 students.

In response to these measures, 28 teachers at the university called for a special meeting and issued a statement in which they threatened to resign if the Vice President did not return to his position and the faculty was not respected, and the arrest and disappearance of Omar came to an end, as well as regulating relations between the students and professors.

Some of these students, according to faculty members, had been used in mysterious disputes which threatened the university, and not only by filing malicious, unsubstantiated complaints, but also through a blatant assault on teachers. Some students broke into the office of Omar Khatab and attacked him without any administrative measures being taken by the university. The teachers’ statement called for the relationship between the university and security agencies in the area to be regulated, with the appointment of a security official for the university and relations with security agencies limited to him.

In a response to the professors’ message, the head of the university declined to return his deputy to his post, saying that this had been a decision by the Interim Government and that he had no right to review it or cancel it. With regards to the other demands, he only promised to form committees and to study the issues which had been presented.

A student source told Al-Modon that university students for their part had began to organize their ranks to stand against these mysterious incidents that threaten their university and “tamper with its independence.” The source revealed that a digital chat group of 13,000 students from Aleppo and Idleb universities, aimed to regulate student action to prevent tampering of some elements of the educational process. The source said that, “A large number of Aleppo University students and their teachers who led the revolutionary movement there years ago—the most prominent university movement in the Syrian revolution—will not accept that their university has turned into a place to counter the revolution’s values or a center for corruption in the form of education institutions they revolted against.”