A new committee has been proposed, which would combine representatives from Kurdish and Arab groups and that could also include the formation of a new joint opposition force writes Al-Modon. 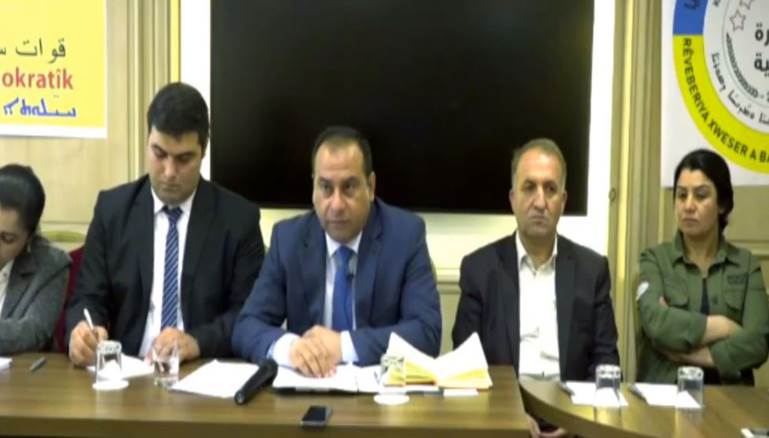 A leader in the Kurdish National Council (KNC) told Al-Modon that Saudi Arabia was working to establish a new Negotiations Committee and perhaps a new opposition coalition that includes Kurdish and Arab forces as part of preparations for the Riyadh-3 conference.

The new Kurdish representation in the presidential and political body of the National Coalition were figures without political weight, according to the source. On Saturday, the National Coalition elected its head, who will also serves as the head of the Interim Government, at the close of the meetings of the 46th session to take place in Istanbul. Abdel Hakim Bashar was voted Vice President, and Abdullah Kadou was made a member in the political bureau. Bashar, according to the source, does not have influence in the KNC, while his election also coincided with reports that he might be kept out of the Council’s leadership positions.

The source said that the KNC was proceeding in a program to implement the French initiative, which would result in the council withdrawing from the Coalition and joining a new political coalition close to Saudi Arabia. This initiative could include the establishment of a new Self-Administration in northeastern Syria in which the KNC participates as well as other Arab forces.

The source revealed that Saudi Arabia will include the Syrian Democratic Council and the KNC in a joint Kurdish delegation, in addition to other Arab forces close to Saudi Arabia, and that it will carry out fundamental amendments to the Negotiations Committee.

In April, Paris put forward an initiative to achieve a Kurdish agreement between the KNC and the Democratic Union Party (PYD) that aimed to include the KNC in the Self-Administration in exchange for the PYD and the KNC participating in representing the Kurds politically. The KNC so far is considered to be the only internationally-recognized force to represent the Kurds politically.

The Kurdish leadership source said that Paris had put pressure on both Kurdish parties to achieve the deal and was relying on the Kurdistan Regional government to achieve it, adding that Paris had formed a committee from each party to implement the deal’s items.

Al-Modon’s sources revealed that the head of the Kurdistan Democratic Party, Masoud Barzani, met with a delegation from the KNC and encouraged them to proceed with the French initiative.

Over the last week, talks have revolved around Saudi preparations to expand the Negotiations Committee and the SDC’s participation in it, as part of the political preparation for the Riyadh 3 conference. Officials from the Negotiations Committee have denied that there are contacts with the SDC, while a member of the SDC presidential council, Sihanouk Dibo, made restructuring the committee a condition for participating in it.

It seems that the SDC is en route to benefiting from the international and regional disputes over the Syrian opposition, which it seems will lead to the establishment of a new opposition political body.

It is unclear what role the SDC could play in the new negotiations body, but international parties support it having a pivotal role in opposition ranks. On Saturday and Sunday, Paris hosted a dialogue workshop held by the SDC and invited the Syrian opposition, with the aim of holding a “general national conference for democratic opposition forces.” Independent and opposition figures participated in the conference and discussed the Self-Administration’s experience, forcing the idea of making their areas attractive to opposition forces.

The countries backing the SDC are working on two levels through internal and external conferences—to market the SDC politically and to attract opposition political cadres to it in order to reduce the PYD’s domination over it.

A member of the SDC presidential council, Zahia al-Rashi, told Al-Modon that the aim of the SDC conferences were to bring together viewpoints and to expand and attract political and administrative competencies. Rashi said that the issue of decentralization had met with strong opposition from invitees to the Syrian-Syrian dialogue conference which the SDC sponsored about a year ago in Ayn Eissa.