Opposition members are having their assets frozen by the regime, with property being sold off at public auction reports Al-Modon. 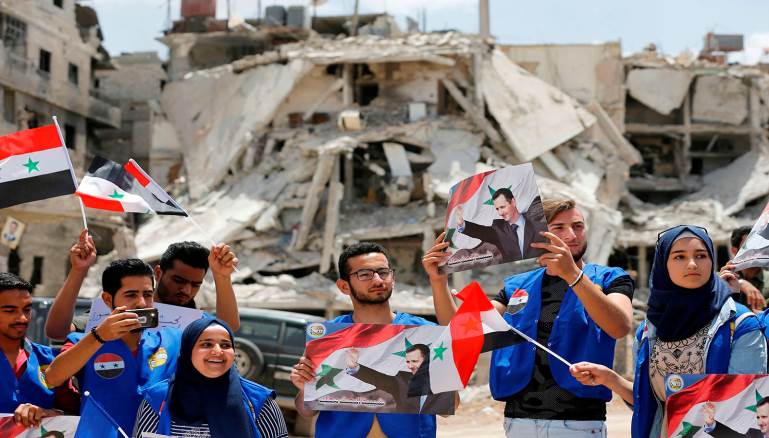 At the start of April, the Syrian Finance Ministry, in coordination with judicial bodies, began to issue freezes in Damascus and its countryside. They started as “precautionary freezes” and became “executive freezes.”

The precautionary freeze temporarily prevents the person it is applied against from disposing of part or all of his finances, until the dispute or the judicial order is completed. The executive freeze is a freeze in which the creditor places an executive bond in the judiciary’s hands calling for the freezing of the debtors movable and immovable assets, with the aim of meeting the debt from this assets or after a sale of property in a public auction.

Lawyer Mohamed al-Mastouf told Al-Modon that in standard cases the precautionary freeze was converted to an executive freeze through an official ruling by the court, and if the debtor has not fulfilled his obligations toward the creditor party. This is done after court sessions between the two sides. The executive ruling, according to the governing provisions of Syrian law, turns the debtor’s frozen property over to a public auction sale in order to meet the obligations owed to the creditor who issued the freeze order against them.

Mastouf told Al-Modon that in the event of a freeze on opposition property, matters proceed in the same direction, but that the “debt” is to an unknown claimant and the trials and rulings are issued in absentia, without anyone from the debtor’s party allowed to attend the sessions. Based on Syrian law, issuing a vague freeze without specifying its value is null and void.

A judicial source told Al-Modon that the first ones to be included in the execution of the ruling, by way of the military courts, would be officers who defected and would be overseen by a committee from the Military Police and the Public Prosecutor in the military courts. This is in addition to owners of factories and companies whose owners had temporary freezes placed on them after charges of “funding terrorism,” and these are under the direct supervision of the Finance Ministry. These will be followed by activists and military figures who fled to northern Syria, which will be done through the military judiciary.

Sources in western Qalamoun told Al-Modon that members of the security forces in the towns of Housh Arab, Jarajir and al-Sahal, leaked news that district directors had received lists from the military courts including the names of defected officers who have had their assets frozen in a precautionary fashion and who would now be subject to executive freezes. Those whose assets have been frozen will be notified of the need to leave their property within a certain period for it to be taken over by the claimant.

A defected officer from Housh Arab, who has had a precautionary freeze issued against him since 2013, told Al-Modon that the head of the town’s security and members of the military police had come to his house where he lives with his family and informed them they needed to leave the property within a month of the date they received the notice, to the benefit of the military judiciary, which issued the freeze order. If they do not leave the house within that period, they will be forcibly evicted.

The defected officer said that a few days after his family was notified, they were contacted by a high-level officer from Military Security who presented himself as a mediator to help them remedy the executive freeze in exchange for money.

Ruling Implemented Without Knowing the “Creditor”

Sources in the village of Ayn al-Fijeh told Al-Modon that opposition members who owned property near the spring facilities had precautionary freezes issued against them since 2016, and that regime forces has demolished their property and had incorporated it into the spring facilities. Regime workers had expanded the facility to an area larger than stipulated by Law No. 1 of 2018, which said the facility should be built around the spring.

Companies Included in the Ruling

A judicial source told Al-Modon that the precautionary freeze ruling number 3448, issued by the Finance Ministry against six companies owned by the al-Anzrouti family in Damascus, had now moved into the executive phase. The most prominent of these companies are the Katakit Industrial Food Development, Katakit for Drinks and Powders, and Anzrouti Brothers. The administration of these companies was informed by way of the judiciary that, “it will carry out legal procedures in May under the direct supervision of the Finance Ministry.”

A source told Al-Modon that properties owned by Arab investors, particularly in the western Damascus countryside, such as Zabadani, Karoum Madaya, and al-Demas in the Sheikh Zayed project had also moved into the executive phase. Dozens of castles and luxury villas in these areas are owned by Saudi investors. Regime forces made the guards living in these areas leave.

Can the Precautionary Freeze Be Canceled?

Sources in Zabadani told Al-Modon that at the start of 2019, volunteers in the Military Security from the area began to make offers to cancel the freeze to people who had their movable assets frozen in exchange for amounts that sometimes ranged as high as 4,000 dollars. These fees were paid to the Military Security, which had carried out the freeze after clearing the area of opposition members.

If a car is put under a precautionary freeze after being stopped at a Military Security checkpoint, its owner has to pay fees to end the freeze, as well as what is owed in terms of violations and securities to the finance office in the Transport Ministry. Sources told Al-Modon that some have been able to recover their cars, whether they were those who underwent “settlements” or those who were outside the country, by way of their families.