Residents in Suweida were angered by the lack of respect and recognition that was given by the regime to the revolutionary leader writes Al-Modon. 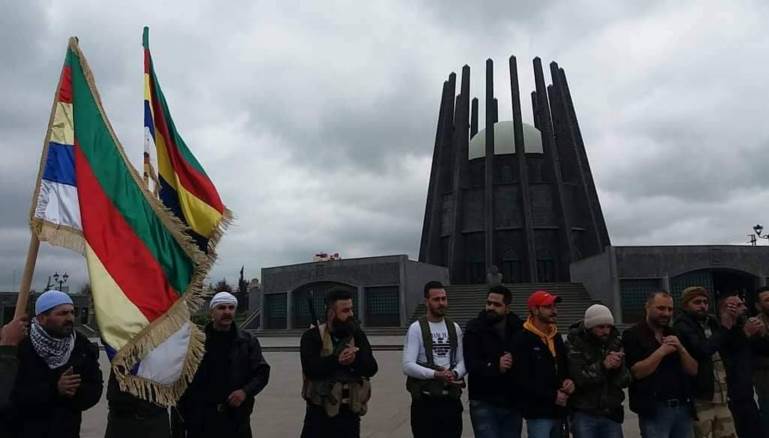 Intentionally coinciding with the 37th anniversary of the death of the major Syrian revolutionary leader, Sultan Basha al-Atrash, the regime held a massive march with children, students and civil servants, at the invitation of the Baath Party, to reject the American president’s recognition of Israeli sovereignty over the Golan, according to Al-Modon’s correspondent, Zein al-Halabi.

While the regime chose to ignore this significant day, the Social Authority for National Action and other opposition movements, revived Atrash’s memory in his hometown of al-Qurayya. They issued a statement in which they called for prisoners of conscience to be released and for political arrests to be stopped. The statement said that a political solution was the “only way to escape from the current ordeal.” Local factions headed to Atrash’s monument, including the Sheikh al-Karama Forces, and raised their banners, and said in a joint statement that the Baath Party was trying to obliterate the anniversary and obscure history through oppression and the silencing of voices.

The regime had prohibited celebrating the anniversary of Sultan al-Atrash’s death from 1982, the year he died, until 2011. Activists and protesters were subjected to arrest and intimidation. The Hafez al-Assad regime had marginalized Atrash’s role and the Great Syrian Revolt, even in school history books, and had fought against any commemoration of the anniversary or any symbols of the Great Syrian Revolt in Suweida. When matters began to slip out of their control with the outbreak of the Syrian revolution, the regime tried to obscure the anniversary, which people had restored as a national holiday, by sending shabiha to attack protesters, or holding loyalist rallies.

When the factions visited the monument, they were overcome with a sense of disappointment when they discovered the neglected state of the monument and that rainwater had leaked into the rooms where archeological artifacts from the Great Syrian Revolt were collected. This pushed some to insult Bashar al-Assad and to smash one of his pictures inside the monument, and then go out and chant for Sultan Basha al-Atrash and Sheikh Waheed al-Blaous.

Over the decades, the monument had been intentionally neglected, to insult the memory of the Great Syrian Revolt. After the monument was established, Atrash’s body was moved there, along with artifacts from the events of the fighting against the French.

For the recent march, the Baath Party forced primary school and secondary school students, as well as employees in government departments, under threat of expulsion or dismissal, to attend a march against the American decision regarding the Golan. The march, which was attended by members of the Baath Party and regime officials and members of religious and social agencies, headed through the streets of Suweida and stopped in front of the governorate building. The children and students chanted for Assad and the Golan, while no mention of the anniversary of the death of Sultan Basha al-Atrash was made.

In light of the prevailing split between the three Sheyikh al-Aql, separate statements were issued to criticize Trump regarding the Golan and calling on the United Nations and Security Council to implement a decision in this regard.