The US has reportedly warned the Syrian Coalition not to get involved with any Turkish operation that could lead to a confrontation between the two sides writes Ana Press. 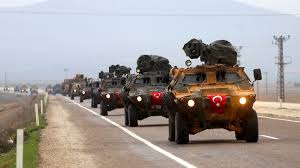 “When the elephants dance, you must stay away from the dance floor” — part of a message published by the Anadolu Agency said to have been from the American administration to the Syrian Coalition, warning the Coalition against participation in the Turkish operation east of the Euphrates.

The message, whose contents and language sparked widespread controversy, up to the extent of questioning its legitimacy, included a reference that the Coalition and the Free Syrian Army’s (FSA) participation, in any form, in the expected operation against the Kurdish People’s Protection Units (YPG) would mean “an attack on the United States and International Coalition forces” and that it would lead to a “direct confrontation” with them.

According to Anadolu, the message noted that American forces and the Syrian Democratic Forces (SDF)—of which the YPG comprises the backbone—overlapped with one another, and therefore it was not possible to attack the SDF without striking International Coalition forces, led by the US army.

Ana Press sent a question to a number of Syrian Coalition officials to uncover the truth of the message’s contents and how they were dealing with it, especially given that the Coalition had announced its official support for the eastern Euphrates operation in messages recently published by the Coalition’s website. However it did not receive a response with regards to the message’s truth, or the Coalition’s position as to whether the message was truth.

In this context, American diplomatic sources have only said, when asked about the extent of the message’s precision, in statements to Ana Press, that the US-led Coalition was continuing its operations, deployment and monitoring points, and therefore was likewise continuing its relationship with forces on the ground (in a reference to the SDF). Sources said that the US was keen on its relationship with Turkey and the current coordination with them, in regards to Syria, and on addressing its security concerns, and declined to comment on the message and its contents without a confirmation or denial.

Turkish President Recep Tayyip Erdogan said last week that the attack on armed Kurdish units deployed in the eastern Euphrates would begin in the coming days, according to the Anadolu Agency.

Erdogan said that his country “spared Idleb a major humanitarian crisis and that the time had come to eliminate the terrorist hotbed in the eastern Euphrates areas,” stressing at the same time that his country “would not target American soldiers” in light of the presence of Washington’s bases in the eastern Euphrates area, where it offers training and support for the Kurdish units, which Ankara considers terrorists.

The Turkish President added, “We are not hostile to America or the American soldiers in Syria, and despite everything we consider them a strategic partner that we can work with in the future, provided that we meet on the correct grounds.” But he also said, “The United States has moved its relations with the separatist organization to more advanced levels with each day, to the extent that they raise the group’s flags alongside their own flags.”

A few days ago, the US administration commented on the Turkish threats of carrying out a military operation on the eastern Euphrates, with Washington warning against any unilateral military act on the southern Turkish border.

On Wednesday, the US Department of Defense issued a statement following Erdogan’s comments, in which they said that his country intended to carry out a military operation in the eastern Euphrates. The Department said that any unilateral Turkish mobilization in this respect would be “unacceptable” and expressed their concerns over this, given that it would subject American forces in the area to harm, as the statement put it.

The US Department of Defense also said that the only way to address these security concerns was coordination between the two countries, especially given that the United States was working closely with the Turks.

The Executive Council of the Self-Administration of Northern and Eastern Syria announced a general mobilization after Erdogan’s comments.

The Council issued a statement last week in which it condemned the comments and “their hostile threats”, as the statement put it and noted that the Turkish President was “trying to cut off a portion of Syria and annex it to Turkey.”