For Syria's displaced, the difficulties of life are compounded by bitterly cold winters spent in inadequate shelters writes Al-Araby al-Jadeed. 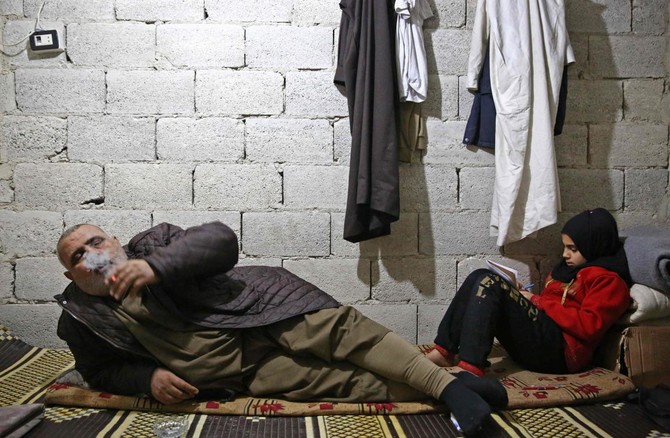 After washing up her family’s dishes over a plastic basin, 11-year-old Cedra sits on the floor of the dank basement in Syria to tackle her day’s studies.

A dark staircase leads from a street in the town of Al-Bab to the gloomy space the young girl, her blind father and some 40 other families have the misfortune of calling home.

“There’s a single room which we use as a kitchen, a bathroom and a bedroom,” said Cedra.

She scribbled in her notepad, while crouched against a wall of bare cinder blocks and under a line of laundry trying to dry in the humid cellar.

The residents of this underground camp were displaced by the Syrian war, sometimes several times, mostly from the eastern province of Deir ez-Zor.

Cedra’s family fled the city of Deir ez-Zor in 2012, in the early stages of Syria’s conflict.

They took refuge in Raqqa, further west, but the city soon became the Syrian capital of the Islamic State group’s self-proclaimed “caliphate”.

The subsequent bombardment of Raqqa, which was almost completely levelled, killed her mother and brother.

The girl and her father fled once more and eventually found their way to Al-Bab, a rebel-controlled area near the border with Turkey.

Cedra does not go school because she needs to help her blind father, but one of the other adults living in the basement has organised classes for her and a few other children.

The war has set her back years in her education.

“I’m learning how to write the letters, it’s only been a few days,” said the girl, wearing a thick, red sweatshirt and a black headscarf.

Each morning, Cedra makes the bed, tidies the room, makes tea and prepares breakfast before studying.

Then it’s time to prepare lunch, after which she plays with the other children before getting to work on dinner.

Blankets are piled up near a flimsy foam mattress in one corner of the small room. A handful of cooking utensils and a plastic broom are tucked away nearby.

“Life in this basement is not easy,” said her father, Mohammed Ali al-Hassan, who hopes to return to Deir ez-Zor.

“There is nothing to do here and no money,” said the greying father, who used to sustain his family by selling fruit and vegetable from a street cart.

A resident of Al-Bab made his basement available to the displaced in mid-2017. The space is now divided in 42 tiny “studios”, one for each family.

Their food and other basic needs are provided for by local charities.

“The initial idea was to have a temporary shelter for people while they look for a housing solution,” said Abu Abdel Rahman, who was also displaced from Deir ez-Zor and acts as a kind of supervisor.

The place soon filled up and few of the families ever moved out for lack of affordable options.

“The smallest possible accommodation involves a rent of 100 dollars. Those you see here are those who can’t pay that amount.

“Here, everyone is experiencing a disastrous situation,” said the 59-year-old, who used to work in a textile factory.

Kneeling in front of a white board, a woolly hat pulled tightly down on his head, Abu Omar forms the letters of the Arabic alphabet, which his pupils recite in unison.

He lost a hand and the bones in his left leg were smashed to pieces after an air strike hit his home in Deir ez-Zor.

Abu Omar’s disabilities left him unable to work but he teaches 13 of the basement’s children.

He said that number has dropped steadily.

“Many of them just have to go out and work. Because of their social condition, many families have to interrupt their children’s education,” he explained.

Umm Ghassak’s childhood came to an abrupt end when the war erupted and now, at 23, she is already a widow.

Her husband died of injuries sustained two years ago during bombardment on Albu Kamal, a former IS stronghold on the border with Iraq.

“We didn’t have enough money to treat him,” she said.

The young woman and her four-year-old daughter are totally reliant on the assistance they receive. “If nobody helps us, we just don’t eat.”