Once used as a status symbol, jewelry is now being traded in by Syrians to secure liquidity writes Salonsyria. 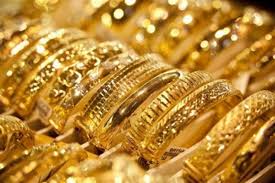 At the end of the second millennium, Syrian women would trade their jewelry for work and a living for their spouses and children. Fleets of small buses appeared to transport passengers, with many women paying the price of the ticket with their jewelry, to the extent that the expression spread: “All Syrian women’s gold is in the jeweler’s shops.”

Jewelry, and especially gold, is considered a way of life for many Syrian women. They live in hope of wearing a sliver of it on their hands and necks as a sign of marriage or a mark of riches and affluence, and it signals to other that all this is mine; or, this was my dowry; or I have taken nothing from the world but that which shines on my hands in gold.

I remember the day a mortar fell on the house of my neighbor, a widow in her 60s. She was bloodied in the face, slipping out of consciousness and crying. She asked me to take four bracelets from her right hand and hide them out of fear they would be stolen in the hospital or she would die with them.

During the war, a hysteria about hiding jewelry, even wedding rings, has spread. This hysteria has led to people losing more jewelry than what has been stolen by thieves. Those who hide their gold in the heater, or a sofa, or an oven or washer have lost them along with losing these appliances, like a gift to the thieves of the house furniture. No one imagined the “ta’afeesh” — that is, that looting would affect wedding rings, spoons, wheelchairs and toilet seats.

During the war, women have also voluntarily given up jewelry in order to cover the costs of their sons and husbands’ trips to start a new life after losing a house, work and sources of income. New brides have also agreed to acquire the cheapest types of gold, such as Brazilian and Russian, and many have even been forced to accept bracelets “stitched” with dyed yellow metal and decorated with engravings so as not to feel lacking.

On the margins of the war a trade in “falso” gold — as it is called in the popular language — has also flourished, and another market has developed to buy real gold at low prices from those who are in need, because the goldsmiths have even stopped buying due to a lack of liquidity and the dramatic price fluctuations.

These changes have caused a state of stagnation in the gold market, which has forced people to sell their gold to women who have access to money. Those buying the gold fear that their money will depreciate or because funds from looting and war commerce have fallen into their hands and they want to exchange it for goods that are more liquid.

In a famous jewelry store in George Khoury square, where the affluent live, and women have their own cars and jewelry bought for appearance — not to provide money or as an investment — three women arrived in five minutes to sell their wedding rings. The first explained, with shame overwhelming her, that she was the wife of a former jeweler who lost all he had and that the ring was her deceased mother’s, and that she wanted to sell it to cover her tomb with marble. The second presented it to the jeweler without preamble. He weighed it, offered her the price, and she nodded her head in agreement, and then took the small amount, still staring into the void. The third said that it was small on her finger and that the fashion now was white gold, and so she claimed she would wear a diamond ring.

Despite the deterioration of the gold market, the sales have helped it maintain its strength, especially for those who have been able to stay working as jewelers. However, the nature of the market has changed. Previously there was demand for the most modern and beautiful jewelry,

but now it is valued by weight. By selling this way there is an economic guarantee, which does not take into account the workmanship that has gone into the piece.

By selling pieces by weight, sellers can secure pure capital, and the pieces can be traded without notable losses, especially given the relative stability in the price of gold.

Recently, there has been a notably heavy attendance at gold-selling stores in some areas, with many women buying and wearing gold to draw attention and turn gazes — and not only to save. In contrast, there is also heavy attendance and more intense demand for traditional jewelry whose market has experienced a recession in recent years. Some jewelers have announced savings offers and instalment plans for traditional jewelry.

One gold seller explained this phenomenon by saying that migrant families send their families amounts in foreign currency to buy gold for them. He adds, “Our gold is the best and cheapest.” Some women receive limited amounts of money from their children to buy gifts for foreign wives or for newborn children, especially Quranic verses, crosses and images of saints. In total, there has been little notable recovery in the gold market — not enough to suggest a sudden abundance or stability, which is adapting to the current situation.

The traditional jewelry market is impressive and able to reproduce all ornaments and inscriptions, and the seller reduces losses if they deteriorate rapidly, saying: “Paint it with nail polish, so it doesn’t change its color! Put it in a high place so it does not cause allergies, and do not bring it near paraffin or soap, to keep it shiny.”