The Yazidi community in Afrin have been targeted by Turkish backed groups, who are trying to create demographic change in northern Syria writes Ana Insan. 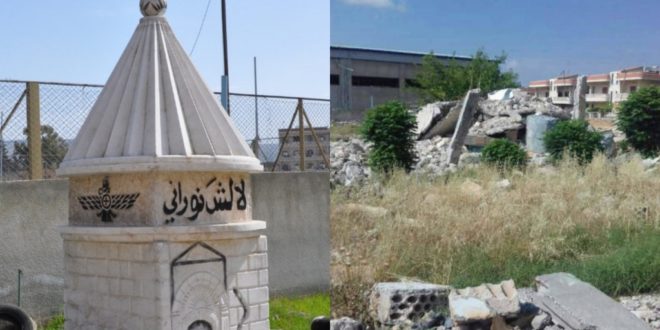 As Syrian rebel groups, backed by Turkey, took control of the city of Afrin at the start of this year, they carried out a number of violations against the Yazidis, forcing them to flee and creating demographic change in the area.

These violations, according to rights groups, amounted to war crimes, as groups pushed to imposed an Islamic environment on the area’s Yazidis and forced them to attend Islamic mosques for prayers as well as changing some Yazidi centers in Afrin into Islamic mosques and destroying some Yazidi shrines and looting their contents.

Yazidis in Afrin are distributed throughout 22 villages out of an original 366 villages, and number, according to semi-official statistics in Aleppo province, about 100,000.

Armed groups from the Islamist Faylaq al-Sham tried to build two mosques in the villages of Bosoufane and Burj Haider on the Shiraou side of Afrin, which are majority Yazidi. They forced Yazidi residents to attend religious studies and also burned a “sacred” tree in the village of Kafrjena and a sacred religious shrine, as well as looting and digging up the Yazidi Sheikh Janeed shrine in the village of Faqeera and destroying it.

Jawan Ali, a Yazidi resident of Afrin, spoke about the violations which occurred before they fled to areas under the control of Syrian Democratic Forces. He said: “We did not want to flee, but after the rebel groups took the area with backing from Turkey, they carried out a number of violations against us in the area. My house was occupied by these groups, who said it was in a strategic area, and they set up a mosque in the village. They also imposed various Islamic religious practices on us and forced us to take part in religious education in the village.”

Jawan describes these violations as war crimes, saying: “These actions against Yazidis amount to war crimes, and despite Kurdish media and human rights groups shining a light on them, there has been a major ejection of Yazidis in the area, which is part of a systematic plan, overseen by Turkish officers, to create demographic change in Afrin.”

Regarding these practices and the rebel groups carrying out violations against civilians, Ali Aissou — Director of the Yazidina Institution — told our website: “Since the Free Syrian Army took control of Afrin, violations against unarmed civilians have been ongoing. According to our observations at the Yazidina Institute, repeated harassment has forced more than 50 Yazidi families to flee from Afrin, after it fell under the control of extremists.”

These groups have not only expelled, arrested and kidnapped Yazidis in Afrin, but there have also been instances of systematic killings there. Ali Aissou says: “We have observed Yazidis being directly killed. On May 10, 2018, extremist groups killed the civilian Omar Mamou, a Yazidi from the village of Qaybar. Fatima Hemki from the village of Qatma was also killed by a hand grenade thrown at her house, according to her children. They said extremists had repeatedly demanded that the family leave their house, but that she had refused, and so armed men repeatedly harassed the family, and had previously kidnapped the husband of the martyred woman and tortured him.”

Coinciding with the continuing violations against Yazidis from Afrin, Yazidis in the Syrian al-Jazira area have called on the United Nations to mobilize immediately to push back against the violations committed by rebel groups against Yazidis in the Afrin area. This came through a sit-in organized in front of the UNICEF office in the city of Qamishli held by the Yazidi House in the city. During the sit-in the joint president of the Yazidi House, Elias Seidou, read a statement in the name of the Yazidi community, which said: “When Turkish forces entered the Afrin area and the Yazidi villages, terrorists marked the doors of Yazidi homes to distinguish them from other civilians. Opposition forces called on members of the Yazidi religion to convert to Islam and to pray in their mosques, threatening and killing those who didn’t, just like the Islamic State (ISIS) did in Sinjar. Their behavior is no different than that of ISIS.” They called on the free world to come together under the leadership of the coalition and the United Nations and the Security Council and international human rights groups.

A number of Yazidi families have left their villages, and headed towards the Aleppo area, which is under the control of the Syrian regime, as well as to areas under the control of the Syrian Democratic Forces in northern and northeastern Syria. The families that have chosen to remain, live in inhumane conditions, with armed groups carrying out arrests and kidnappings with the aim of getting ransoms, combined with pressuring them to leave and creating demographic change in the area.