Many volunteers are now working on reviving schools in the liberated areas in Aleppo, Syria's second largest city 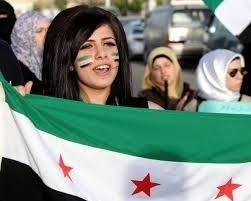 Despite the constant thud of rockets and deteriorating living conditions, including the destruction of basic institutions and infrastructure, Syrians continue to fight for their lives in the midst of death.

In Aleppo, most schools in active combat zones and front line areas have closed. Some have been turned into military bases or rubble. But some Syrians have realized that rebuilding the future begins with the children, and that the interruption in education could create a lost generation, so many volunteers are now working on reviving schools.

The Martyr Mostafa Qaraman Elementary School, for example, has been established in the basement of an Aleppo mosque, which is considered more protected from shelling, by a civil society group called “Kish Malek” or “Checkmate.” There are currently about 120 students of both genders registered.

For the most part, the school follows the government curriculum, with the exception of Baarthist ideology. Teachers also organize activities such as games and competitions throughout the school day.

According to one of the school’s founders, administrators and teachers strive to create what they say is a “neutral” place of learning. Any political expression that goes beyond vague support for the Syrian uprising is strictly forbidden. There are no symbols of jihadist movements, and students are not separated by sex or obliged to pray. The teachers, most of whom live nearby, are paid a symbolic wage. The group is currently studying the possibility of opening a middle and high school.

The Jana Foundation For Education, which operates under the slogan “because our children are the Jana [fruits] of our revolution,” is more organized and widespread, managing 12 schools in five districts controlled by the opposition in Aleppo. The Jana Foundation schools span all levels, from elementary to middle and high school, and are held in mosques, homes or schools that have not been destroyed. Although they operate in opposition-controlled areas, the schools are free of armed elements in the interest of the children’s safety.

Jana Foundation schools teach Arabic, English, mathematics, the Qur’an and Islamic education, in addition to offering extracurricular activities such as painting and singing, which are intended to help children cope with the psychological effects of war.

Some of the teachers are experienced educators while others began recently, but their wages are largely symbolic — about 3,600 Syrian pounds (approximately US$25) per month. One of the foundation officials who refused to disclose her identity for security reasons denied rumours that the foundation is supported by the Muslim Brotherhood, saying: “From the beginning we made sure to secure multiple sources of funding in order to avoid any particular opinion or beliefs being forced on us.”

“We don’t even have enough money to pay all the teachers’ salaries this month, so we sent out an appeal to anyone who can help,” she continued. “If the Muslim Brotherhood or any other group were behind us we would not be in this predicament.”

A member of the local council in Aleppo who declined to be named in print said the majority of these new schools were licensed by the council, but that even if new schools were operating without permits, the council has “no desire” to shut them down.

In the areas under opposition control, exams for middle and high school diplomas have been scheduled for after Eid al-Fitr in mid-August, but the schools did not impose this deadline on the students. Rather, students were free to choose the timetable for official exams as set by the government, which began the second week of June for high school exams and were held within the University of Aleppo due to the lack of adequate testing facilities.

Education has become even more important as the security situation worsens, said Um Mohammed, a mother of four children aged between 6 and 11 years.  She says that it was important that her children stay enrolled in school.

“[My children] enrolled late because we were displaced during the first semester, but now we are back and the teachers are helping them make up for the time they lost,” she said.

Abu Abdul Rahman, a father of four sons, said two of his children are still in school, but there are no high schools in the area for his 17-year-old. His fourth son, 15, had dropped out before the fighting reached Aleppo.

“I do not know how to read nor write,” said Abu Abdul Rahman. “My children tell me they are learning the multiplication table and Qur’an, and my youngest learned to pray. The important thing is that they are learning to read and write.”

Fatima, a middle school student, said: “Teachers are working with us and are making great efforts to make sure we pass our exams. Given the circumstances, I don’t believe that it is possible to [do more].”

Fatima has planned to sit for her exams, but with just a few days until the start of exams, she feared the crossings between the areas under the authority of the regime and those controlled by the opposition would close.

Most students say they prefer to take their exams within the official period, especially given that there is no indication the diplomas issued by the Syrian opposition will be recognized abroad. Both Libya and Egypt had offered oral promises to recognize opposition diplomas, but have so far failed to take concrete steps towards this end.

“Every time we try to get official recognition for diplomas we see attempts to avoid it,” said a spokesperson for the Aleppo city council. This has caused many worried parents to see the official exams of the government as the safest option for their children.