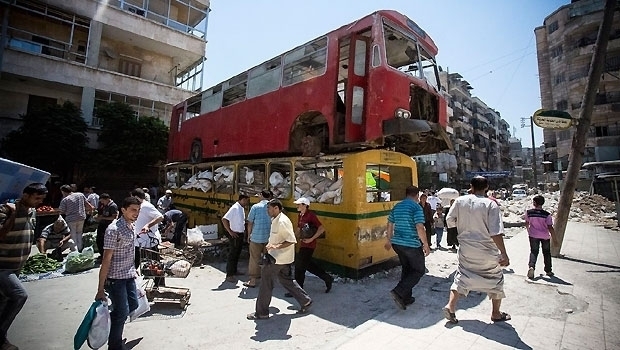 Berlin had Checkpoint Charlie. Sarajevo had its sniper alley. Aleppo has Bustan Al-Kasr, the single point in a city of five million where it is possible to cross from one side to the other, from the area that has been under the control of the Syrian rebels for a year now, almost to the day, to the districts still held by Assad’s regime. A two-minute walk takes you not just to another city but to another country. It is a walk as dangerous as it is short, and yet every day thousands of Aleppines play Russian roulette on Bustan Al-Kasr because they have been left with no other choice.

The road leading down to the crossing point is packed on the first Friday of Ramadan. Two burned-out buses stacked one on top of the other mark the start of the last stretch of opposition-held Aleppo. On the other side of them, a bustling market is thronged out with hundreds of shoppers buying their vegetables in preparation for this evening’s Iftar meal, and in front of the market the skyline is dominated by a minaret less than half a kilometre away, in the regime’s area. The minaret dominates the mind here, as well as the eye, because there is a government sniper positioned in it. When you realise that, you realise in the same moment why the crazily piled buses are behind you: they are shielding the civilians from this sniper.

But you have walked around the buses, and now you are exposed. How does it feel to walk down a road knowing that you are an easy target for a sniper? Your instincts tell you to run but your logic disagrees, because you know that you should not do anything that will make you stand out more than you already do. You wonder whether a man with a rifle is lining you up in his sights, preparing to pull the trigger and finish it all for you. You look at all the people around you in the market carrying on with their daily lives and think that maybe you are the only one feeling like this; or maybe everyone else is feeling like this, too, but they have just grown accustomed to hiding it.

At the end of the street, a pile of sandbags ten feet high is hung with the black flags of the Salafists. This is the last outpost of rebel-held Aleppo, the Aleppo dominated by Al-Qaeda and brutalized by Assad’s artillery. This is Gibraltar or the Falkland Islands, except it’s not, because the road carries on afterwards exactly the same as it did before and it barely makes sense even as you look right at it in front of you. There used to be dozens of crossing points along the city’s dividing line, but one by one they have been closed down, and now Bustan Al-Kasr is the only one that remains.

Through a six-foot gap in the sandbags, a mass of human beings funnel into the other Aleppo. The handful of rebel fighters manning the checkpoint can do little to control the flow; men, women and children with stress-etched faces all take their chances at the city’s deadliest spot for civilians. This is a weekly ritual for Sara, 23 years old and cut off from her studies by a frontline that divides her home from her university. “I don’t go to my lectures any more, but once a week I go to the library and pick up my notes so that I can study at home,” she says. But now it is exam season, and she must run Bustan Al-Kasr’s gauntlet to sit each one, because otherwise she will fail the year.

“Doing this is so hard, but not because I’m afraid to die,” says Sara. “I just want to go to university and study, so why do I have to run and be afraid just to do that? Sometimes I cry when I do this.”

There are many other girls like her. Two of her friends are renting apartments in the regime side of the city during the exam period so that they can avoid the daily terror of Bustan Al-Kasr. But she refuses to join them. “I don’t like to stay there because there are shabiha [pro-government militia] and regime soldiers everywhere in the government area, and I’m scared that I will be arrested,” she says.

But dozens have been killed at the crossing point. Sara says that one day she crossed in the morning to go to her university. In the afternoon, she crossed back and found that the sniper had opened fire, killing fifteen on the deadliest day at Bustan Al-Kasr. “Sometimes I see blood on the road,” she tells me.

At the sandbags that mark the borderline, I take out my camera. I shoot only three frames before one of the rebels spots me and comes over, flanked by two of his comrades. They want to know who I am and where I’m from; they demand that I give them my camera so that they can delete the photos. But we’re saved by the sniper. One shot rings out, and the crowd parts as everybody runs for cover. A second shot and the rebels who stopped us are distracted by the growing chaos, and we take our chance to disappear back into the crowd. Back through the market place, back up the sniper’s sight line, to take cover again behind those piled-up buses.

An hour later, after midday prayers, the customary demonstration starts just a few streets away from Bustan Al-Kasr. The crowds of protesters wind their way to one of Jabhat Al-Nusra’s neighbourhood offices. Outside they shout their demands—that the last crossing point be closed to stop regime informants coming to the rebels’ side of the city. But that would mean disaster for Sara and so many others, because although the crossing is deadly, it is their last and only choice.