Assad’s visit to Daraya, a city that has been fully destroyed by his forces is an attempt to show victory 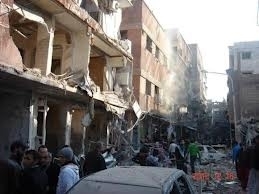 Forces loyal to Syrian dictator Bashar al-Assad may have retaken the Syrian rebels’ stronghold of the old city of Homs. For two years Homs was outside of the Syrian regime’s grasp. The city lies at the center of Syria, and controls much of the road traffic across the country.

Syrian authorities said on Monday that the army had regained full control over a rebel-held district of Homs after weeks of fighting in the central city, which has been at the heart of the two-year uprising against President Bashar Assad.

“Units of our noble army have completely restored security and stability to the Khalidiyeh neighborhood,” state news agency SANA said.

The army, backed by fighters from Lebanon's powerful Hezbollah militant group, launched an assault on Khalidiyeh a month ago as they intensified efforts to retake all of Homs, activists said.

The full recapture of Homs, dubbed by rebels ‘the capital of the revolution,’ would be a major coup for President Bashar Assad's regime, as the city straddles a key route linking Damascus to the Mediterranean coast and the Alawite hinterland of Assad's minority community.

One hundred thousand people have been killed in Syria's two-year conflict, which began with peaceful protests against al-Assad's rule in March of 2011, according to the most optimistic statistics.

The new progress of the Syrian army comes on the heels of several battles in which the regime gained while the rebels had to deploy their troops after harsh defeats.

In early June, the Syrian forces retook a town on the Lebanese border after a three-week offensive with help from hundreds of fighters from Hezbollah, the Lebanon-based Shiite militia backed by Iran. Activists say more than 1,000 civilians and Free Syrian Army fighters died during the battle.

Later, the regime forces together with Hezbollah fighters achieved significant victories in Tal Kalakh and in the Aleppo countryside before they took aim at Homs.

The situation in Eastern Ghouta, in the Damascus countryside, is also tragic. The regime air force and missiles are pounding the besieged area while people are forced to live without the simplest daily requirements including electricity and clean drinking water.

One journalist, writing under a pseudonym, described the ongoing siege as “medieval in scale.” The regime's war of attrition chokes supply lines and food is prohibited from entering Eastern Ghouta. Inhabitants and their livestock survive on what little can be grown, she writes. But has Assad really won the war?

At least he believes so.

On Thursday, Assad lauded his troops’ struggle against opposition forces, saying they are fighting the fiercest of wars but that he is confident they will be victorious in the country's conflict.

‘‘Had we in Syria not been confident of victory, we wouldn’t have been able to resist for over two years.”

In an apparent reference to widespread expectations over the past two years that the opposition forces would remove him from power, Assad told his troops: “You have surprised the world with your steadfastness and ability to face difficulties and achieve results.”

Soon after he made his remarks, Assad made a visit to the devastated town of Daraya, in what Reuters considered to be the latest sign of confidence by Assad, whose troops have been on the offensive, scoring significant gains against the rebels in recent months.

This visit was his first known public trip outside of the Syrian capital, his seat of power, since he visited the battered Baba Amr district in the central city of Homs after his troops seized it from rebels in March of 2012.

Daraya, just south of Damascus, was held by rebels for months and it took the army weeks of heavy fighting to regain control of the suburb earlier this year.

But it is not only Assad who believes that he has won the war against his people. Shlomi Eldar, for Al-Monitor Israel Pulse, concluded “the wimpy leader who was the butt of everyone’s jokes (…) not only survived the storm that was the Arab Spring, but he even managed to repel it with his blood-stained hands.”

Eldar described Assad as “Syria’s new strongman,” and added that the “good intentions, plans by Europe and the White House to arm the rebels or provide logistical assistance are unrealistic (…), won’t bring down the Syrian regime. They’ll just end up adding to the awful bloodshed there.”

Assad’s “Menhabkjiyeh” (fans) are waging a Facebook campaign to encourage Assad to appoint a Syrian “Governor for the Sanjak of Alexandretta.”

It’s strange that the campaign’s organizers remembered Sanjak of Alexandretta now, after more than 70 years of its occupation by Turkey and 15 years after the Syrian regime sold it to Turkey.

It is yet another sign that Assad supporters believe they have secured victory.

But not everybody agrees with Eldar.

Ammar Abdulhamid, a Syrian analyst and the President of the Tharwa Project, believes that it all depends on how one defines victory.

In an interview with The Syrian Observer, Abdulhamid says Assad remains in control of parts of Syria and he is still in play as a warlord— perhaps the most powerful and most connected warlord on the scene.

“But to get here,” Abdulhamid adds, “Assad needed to make major concessions, both territorial and in terms of the nature of the decision-making process within his own circle.”

One writer and activist says that Assad has already lost the war. In a statement to The Syrian Observer, Omar Qaddour said “the regime does not hope for victory as much as it hopes for harming the revolution.”

“Destroying the country in such a meaningless way shall not lead to the regime’s victory, no matter how long the regime may resist,” he said. “Because in its best scenarios it will not be able to rule this people.”

Adnan Abdulrazak, a Syrian journalist, believes that even if Assad managed to remain in his post until 2014, he will not achieve victory. Assad destroyed the country and is working on dividing it, Abdulrazak said in a statement to The Syrian Observer. “I really do not know what kind of victory this is.”

In fact, it is highly unlikely that Assad will be able to regain control over all of Syria, while the decision-making process in his own circles seems to have devolved to new figures rising from the ranks of the security and military apparatuses as well as to the newly established popular militias. These figures seem to be acting at the behest of, or in close coordination with, Iranian counterparts.

At best, then, Assad can emerge as a Syrian Hassan Nasrallah, taking charge of a Syrian Hezbollah. But at this stage, he seems to be acting more as a necessary figurehead behind whom a new arrangement is getting studiously worked out with strong input from Iran and Russia.

Be that as it may, this situation can still be interpreted as a victory by Assad and some of his supporters, especially considering the level of chaos and havoc in areas under rebel control.

Saddam Hussein viewed himself as victorious in the aftermath of the First Gulf War because he remained in power over parts of Iraq. This mentality of holding on to power at any cost in societies where subnational loyalties can still trump national interest in times of crisis gives rise to a novel interpretation of victory that would seem illogical and nonsensical to more rational observers who think in terms of the national interest.

Finally, a victor would not be still working on having his mini sectarian state. The way Assad’s troops are trying to cleanse certain cities and villages of their Sunni residents can only be a sign of Assad’s intention to continue establishing an Alawite state along the lines of the “Alawite State” that existed under the French Mandate of Syria as a plan B in case he loses the war against his people.