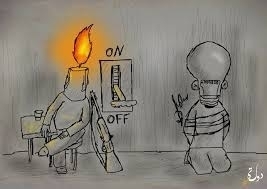 Najeh al-Rahmoun, 51, lives with his wife, who introduced herself as Um Karim, 40, and three children in a three-bedroom house. Inside, you can’t hear the sound of television, and the children don’t use the computer that is sitting in a corner of the living room. It is unbearably hot, and the drinking water has become warm since the refrigerator has morphed into a mere closet in the kitchen. Flies swarm during the day, while mosquitoes take their place at night.

Most of the time, Um Karim does the laundry by hand, and she can’t iron any clothes. After sunset, the family sits by two or three candles, not for romance, but for light.

The biggest part of Maarat Al-Nu’man where Rahmoun lives has been shrouded in darkness for about a year, ever since nearby fighting damaged the power distribution stations in the city and the nearby town of Bseeda.

The two stations distributed electricity generated at the thermal power plant in the town of Zayzoun, located approximately 100 kilometres away from Maarat Al-Nu’man, near the city of Jisr Al-Shughour in Idlib province. In addition, clashes between regime forces and the armed opposition damaged electricity cables and towers in different parts of the city were also damaged.

Rahmoun says he has been unemployed for about a year. The tile factory he used to work at with six of his colleagues has shut down when the owner was unable to cover the costs of the diesel-fuelled electricity generator.

Beore the war, around 100,000 people used to live in Maarat Al-Nu’man.  It lies in the north of Syria in the province of Idlib. Most of the city is under the control of the Maarat Eagles Brigade and the Maarat Martyrs Brigade, both of which belong to the armed opposition. However, some areas are under government control, such as the Wadi Al-Dayf military camp east of the city and the Hamidiyya camp to the south.

A maintenance worker in the Maarat Al-Nu’man and the Bseeda stations who requested his name not be printed said that the Syrian Army shelled the Maara plant with tanks from the Wadi Al-Dayf camp. Aircraft also bombed the Bseeda station after rebels barricaded themselves inside the plant during the first days of the battle to control Maarat Al-Nu’man, which began last August and continues to this day. According to the maintenance worker, the two stations were also looted after the damage they received following the shelling.

Mahmoud al-Ghazzoul, 42, the field commander for the Free Syrian Army-allied Knights of Righteousness Brigade, confirmed that looters attacked the plants after they were shelled. However, he denies that rebels barricaded themselves inside before the attack.

“The regime shelled the plants because it bombs everything. It punishes the residents of liberated areas because they represent popular support for the rebels,” he said.

A member of the Idlib provincial council who preferred to remain anonymous said Syrian President Bashar al-Assad’s regime is responsible for the blackout. He said that if the regime were really concerned it would have provided Maarat Al-Nu’man with electricity through the Bara power station, which is 10 kilometres west of the city, and increased the amount of power allocated to it from the Zayzoun thermal station, which is working at full capacity.

“The regime is ignoring people in areas controlled by the armed opposition, even though they are also Syrians,” he said.

Blacksmith Zakaria al-Qaq, 47, commented on this logic of punishment and neglect. “Electricity doesn’t cut off in the nearby city of Idlib because it is controlled by the regime, unlike here,” he said.

A government worker in the Maara power plant who preferred to remain anonymous confirmed the regime’s reluctance to provide Maarat Al-Nu’man with electricity. However, he also blames the armed opposition, because it allowed thieves to steal government-owned power cables, equipment, and generators.

He said that the three to four hours of electricity the Maarat Al-Nu’man receives comes thanks to the initiative the power plant’s workers took earlier this year, when they extended electrical cables from the neighbouring towns of Hass and Kfar Nabl, which are in opposition territory, to the local plant. The worker said that these two towns also suffer from a severe shortage of electricity, and only receive six hours of electricity per day, at most.

“Kfar Nabl doesn’t get more than six hours of electricity per day in the best of cases. Sometimes it gets nothing for days or weeks,” said Ramy al-Fares, 36, an x-ray technician from the Orient Hospital in Kfar Nabl.

To combat the dearth in electricity, some of the more affluent residents rely on small diesel or gasoline powered generators. Few residents of Maarat Al-Nu’man can actually afford to buy a generator and then pay for the diesel, whose price has increased gone up from 20 Syrian Liras per litre before the uprising to around 150 Liras two years later. Similarly, a litre of gasoline has gone up from 40 to 275 Liras. The two remaining hospitals in the city, Orient Hospital and a field hospital, depend on generators to remain functional.

The power cuts contribute to the rising price of basic commodities, as shop owners need to cover the cost of generator maintenance and diesel.

Haidar al-Shalh, 40, a grocery shop owner in Maarat Al-Nu’man, says his prices have gone up around 50 per cent over the last few months. According to Fouad al-Amsha, 19, a water cistern owner, the cost of water has also multiplied due to the rising costs of water extraction, which must be done with diesel-powered generators.

Even though Um Karim doesn’t expect the electricity problem in Maarat Al-Nu’man to be solved any time soon, she still dreams of the day when an official in the Ministry of Electricity would say “We began repairs on every corner of this land to fix what the war has damaged.”