Reports say that cartoonist Akram Raslan was killed under torture 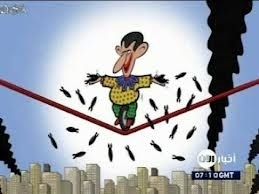 Here There Be Dragons: in Syria Akram Raslan is slain.

We've learned that on July 26, Akram Raslan and other prisoners of conscience including journalists, artists, singers and other intellectuals were secretly put on trial with no witnesses, no defense attorneys, no appeal, and no hope for justice.  From unconfirmed and sketchy reports we learned that they were all condemned to life imprisonment.

Somehow, along the way to prison young 28-year-old Akram Raslan (and possibly others) was peeled off, taken out and executed. He is reported to be in a mass grave somewhere near Damascus. Our reliable but for obvious reasons anonymous sources further allege that the murder of Akram and other condemned prisoners was carried out by Mohammad Nassif Kheir Bek, currently the Deputy Vice President for Security Affairs in Syria.  He has already been sanctioned by the European Union for the use of violence against protesters and the Syrian civil war.

Akram Raslan was the winner of the Cartoonists Rights Network International, Award for Courage in Editorial Cartooning for 2013.  Past award winners have hailed from Malaysia, South Africa, Turkey, Palestine, Iran, and India, including last year's winner, Ali Ferzat, also from Syria.

Here in the United States we are experts in the knowledge that editorial cartooning is a dying art.  In other areas of the world, however, it is an art that people die for.

CRNI has been monitoring and assisting political cartoonists in trouble for the last 20 years.  They are often victims of failing regimes stamping out criticism, drug cartels squashing investigations, corporate interest protecting money and political manipulation, and religious zealots stamping out thinking.

About nine months ago young Akram Raslan was abducted from the offices of his newspaper and "disappeared" into the Syrian dictator Bashir al-Assad's prisons for the next six months.  Readers might remember the case of Syrian cartoonist Ali Ferzat who in 2011 had his hands broken by the Syrian regime's thugs. As they finished the job they told Ali that his broken hands would prevent him from disrespecting their master through his cartoons.  Ali Ferzat was lucky.  He survived the beating and eventually found safe haven in another Middle Eastern country.   His revenge was to live to draw again.

The hue and cry over this attack that grew from the world's journalists and cartoonists must have made an impression on Bashir al-Assad. This time, a beating wasn't enough. This time he decided to "disappear" the cartoonist permanently.

We learned in late May that Akram would be part of a show trial where he would be charged with various crimes including sedition and disrespecting the head of state.  The only evidence against him was his Facebook posted cartoons encouraging people to laugh at the dictator.  Aftedr his abduction, CRNI wrote a letter to the Syrian Ambassador in Washington, DC asking for his intervention in having Akram released.  We quickly learned that Akram's trial would be postponed.  We breathed a sigh of relief until we learned that instead of being released additional charges of being a spy for the CIA and for Israel had been leveled against him.  In Syria, under the present circumstances, these charges are a death sentence.

Mark Twain once said, "Against the assault of laughter, nothing can stand." Our social scientists and our humorists will argue for the next hundred years about the mechanics and effects of laughter on human behavior.  But one thing that Akram's apparent death has demonstrated above all else, is how frightened the terrorists, the despots and the religious zealots are of people laughing at them.  Tyrants might be able to fight off criticism or an insurrection or even assassination attempt with truncheons, bullets and terror.  But where do they turn their guns to stop their people from laughing at them?  Can there be any more efficient, more powerful, and cost-effective way of empowering a people than dispelling their fears with a courageous cartoon on its way to letting them laugh through their fear?

It could be that Akram made a grave mistake in not running away sooner, or toning down the cartoons that he posted on his Facebook page.  When I asked one of our past Award winners, Malaysian cartoonist Zunar, why he didn't take these avoidance actions in his own case, he faced me squarely and indignantly said, "This is my country. These tyrants have no more right to be here than I do".   We are lucky here in the United States to have a long list of honorable, intelligent and articulate humorists who every day labor to pry open our heads and fill us with the courage to face our fears and prejudices.   We are lucky that an effective rule of law protects them.

Within the quagmire that has overtaken Syria and its people, it's difficult to know if right and wrong are even discernible any longer.  One thing that Bashir al-Assad has proven is that on his way to protecting his own people and his own regime he is murdering Syria's dreamers and stargazers.   Through the lives of people like Akram Raslan we are taught that it's not only the soldier in the heat of battle who must be called upon to exhibit courage.

I am sorry I couldn't reach down into the pit and drag you out Akram.   Please forgive me.  Perhaps your sacrifice will motivate us to look again into the mirror, and ask again where we straddle the line between fear and courage and challenge us, again, to take a new first step.