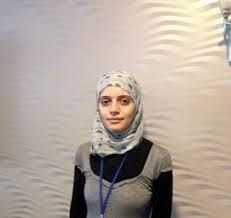 Ayat Ahmad’s eyes were filled with determination and hope while she, a young activist and former detainee in the Syrian regime’s prisons, spoke about her dream of establishing a center for foundling children in one of the border areas between Syria and Turkey.

Ayat said, “At the end of 2009, when I was in the first year of university studying French literature, the security forces arrested me because of my student activities. They tortured me and accused me of being a Salafi, of contributing to the weakening of the national spirit, of working for Israel, and of harming the prestige of the state. Of course, all of these accusations are ready-made to be applied to any detainee involved in any civil movement or public activity, and I laughed at them, because I’m not Salafi. I believe in moderate Islam, and I have no important secrets to give to Israel…” Ayat smiled ironically, “Israel is concerned, perhaps, with love stories about my friends. That’s the information I have.”

She continues, “My detention lasted many months. My father was, and still is, pro-regime. My aunt is a police officer, her name is Muna Ahmad, and she expresses pride that she is supported by the Syrian regime, and that she works as a pimp [informant] for them. This is literally how she describes herself. As for me, from the beginning when I began to realize the injustice perpetrated by the regime against the Syrians, the strong motivation and hidden strength inside me were waiting for the opportunity to get out. My father’s support for the regime disgusted me.”

The effects of fatigue and physical exhaustion showed clearly on the features of Ayat, who is in her mid-twenties. Her body, which was exposed to all sorts of violatiosn (as she says) still prefers tight jean pants and T-shirts. Her head is covered with a ‘shawl’ which in recent years has come to represent the uniform of young Muslim women who are convinced by and believe in moderate Islam in the Arab and Muslim worlds.

Ayat held her tears back while talking about her daughter, who is still in Syria. "I have not seen her for more than a year. I wish to embrace her to my heart and soul, she is more than a year and a half old, named Lilas…” The young lady stops talking, looks at the sky as if she were praying for God to bring her together with her daughter.

Ayat said, "the second arrest was during the revolution, while my friend Carolen Ayoub, who is from the Al Kassaa neighborhood, and I were in the Al Tadamon neighborhood distributing chocolate and food we brought from the Monastery of the Jesuit Fathers as humanitarian donations for the affected families. We were arrested together, to be separated later.” Carolen confirmed that Ayat was arrested for a short time. Ayat continues, “In the cells of the security branches I was subjected to many kinds of torture and humiliation. I was afflicted many times with hysterical attacks, which often led me to lose consciousness. They forced me to take sleeping tablets. Months later, I came out of the prison with more hate for the Syrian regime, which is the most criminal system throughout the history of mankind.”

Ayat continued, “In the cell, I wrote the following verse on the wall:

"tomorrow I shall see you again

And shall get rid of my prison’s pains

My second stage of my life will begin then

And the Branches will blossom again”

And the warden applied all the possible ways to torture me, he stepped on my stomach, accusing me of belonging to Islamic organizations. The officer Waseem Ayouche who supervised my torture, kept repeating all the time that they will annihilate all the opposition. I don’t understand the reasons of this blind hatred that the Assad regime and its men have! Have we really lived with these monsters?! I am astonished and shocked!”

During the conversation, Ayat sometimes seemed absent–minded for a while. Then she gets herself composed, saying "Unfortunately, in such circumstances there is now a whole generation brought up in Syria carrying the values of hatred and violence. The regime is pushing the Syrians toward this, a whole generation of foundling children who are a result of rape, destruction, and disasters, as well as, unfortunately, extremist organizations.”

After the second arrest, Ayat divorced her husband. This young lady who shows determination to return to and continue her normal life said, “Problems and difficulties of life have torn us up… Many of my peers were exposed to the same bad circumstances that I was in my private and public life.”

The young Syrian with brown hair continues, “I need to kiss my daughter. I long for the victory of the revolution in my country of Syria. I want to establish a project that takes care of foundling children. I want to contribute to raising Syrian children who don’t believe in war and hatred. Unfortunately, I’m seeing my Syria fading in front of my eyes at the hands of the Assad regime and the extremists. We as a generation dream of life, change, dignity, and removing injustice. We seek the future, and work, and we demand to get our freedom.”