This account was written by an anonymous observer from Bab Touma 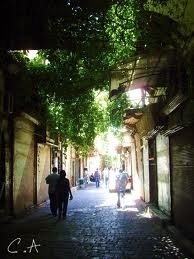 Many Christians in Syria in general and Damascus in particular wonder about the mystery of why Christian neighborhoods are becoming increasingly targeted with mortars.

Mortar shelling has led to hundreds of deaths and injuries over the past months, prompting some residents in these neighborhoods to consider migration out of the country. Others take up arms because they believe that Christians are targeted by what the regime calls "armed gangs". Others still have taken refuge in churches to pray and ask for the protection and Mercy of God.

But many of the young Christian living in the targeted areas accuse the regime of being behind these attacks and wonder, sometimes secretly and sometimes publicly: Why would the armed gangs target the Christian neighborhoods which form a safe place for the displaced from the areas targeted by the regime?

And why do those gangs target them, though Christians are not their enemies? Why don’t they target Assad’s neighborhod, near Harasta and Duma? Why do not they target Ish  al-Wirwir near Barzeh? Or Mazzeh 86?

A young man in the neighborhood of Bab Touma confirmed: "We don’t say that the battalions of the Free Syrian Army and Islamists are not guilty of targeting Christian areas, but we emphasize that once we think of it a little bit, we will discover that it is not in the interest of those battalions to target Christians. Firstly, because they are not their enemies, and secondly because the Christian areas form a safe place for Sunni families who have fled from areas bombed by regime forces. Thirdly, those missiles targeted Christians and Sunnis alike. So it is not conceivable to target these areas after all? Of course, this does not negate the existence of some unruly fighters in those battalions… "

The same young man said that many of the young people living in Christian neighborhoods have become convinced that the regime is responsible for  targeting Christian neighborhoods with mortars so as to push the young Christians, who still refuse to stand with the regime and to take up arms, to stand with him to confront what he calls "armed gangs" which the regime claims that they are targeting Christians in order to displace them, on the one hand, and to make the heads of Christian churches to ask for help from the Vatican and European countries on the other.

The regime wants to invest it all in front of the world public opinion in order to gain more international support in its war against its own people under the guise of fighting extreme terrorists. The statement made by Patriarch Lahham yesterday comes in this context