With Idleb in opposition hands, the regime has focused its wrath on the province 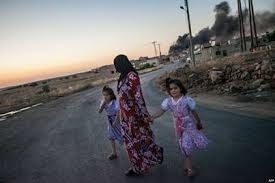 Living without even the most basic necessities under a war waged by the Syrian regime, the people of Idleb are struggling to survive.

Constant shelling makes even finding a place to live and sleep difficult.

The province has been living in darkness for many months with no electricity, no light or warmth other than that supplied by fires and candles (if found).

Fawas, a local council member in Idleb, told The Syrian Observer about the hardships endured without electricity. The main electrical base in Wadi al-Def was damaged due to heavy bombardment by regime forces and opposition fighters, he said.

Rouqqia, a mother of three, said she had no electricity for at least a year since the battle of Maarat Al-Numan in 2012.

Water in the province mainly comes from wells. But most wells are out of service due to the lack of electricity. Moreover, most of the generators have been stolen, also forcing people to leave their homes and land.

Cold weather means water does not reach homes because it freezes in the water pipes. Some homes do get water, but there isn't hot water for people to shower, therefore most people don’t take showers for a long time.

Most people in Syria use diesel heaters in the winter. But since the crisis, the Syrian people don’t have diesel because of the lack of security at refineries.

Also another way to heat is to use fires. But wood to be used as fuel has been lost to the FSA as well as other sectarian groups including the Islamic State of Iraq and Greater Syria, the Kurdistan Worker’s Party (PKK) and the Nusra Front.

People are suffering from a lack of all types of fuel, including diesel and gasoline. There is no means of transportation for stolen fuel and no way to export products. The fuel industry in Syria depended on the exportation of goods and products to Iraq and Lebanon.

Fields in Idleb are famous for active agriculture. Grains, lentils and cumin were all produced in Idleb. Now people are not able to harvest their crops due to the high price of agricultural goods and fertilizer. A farmer complaining about the regime said that the “regime banned fertilizer because of protests against him."

When the FSA gained vast areas of Idleb countryside, regime forces increased the shelling of civilian areas. The revolutionaries say the shelling is against them and not on the villages or civilians. Whereas, a general responded to this complaint, saying that “every inch in this region is a goal". He considered that the land is now under the control of his enemies and even the civilians are regarded as enemies. Civilians are constantly startled as they observe the MIG fighter jets and live under fear of the fall of TNT barrels and guided missiles.

Mohammad, a member of local council said: “I fear the regime shelling on the village because every inch in village is a dwelling or refugee."

Most harvest last year was burned by shelling and by Assad militants. Regime shelling also targeted mills causing the death of hundreds of people.

The regime always tries to control and support his currency. Last month the low the price of SP was 200. Before the dollar after delivering employees' salaries, the regime pushed up dollar to 140 SP to hit at the lives of employees, while they benefit by not losing money from the budget.

Citizens have no income and yet the regime tries to catch up with their losses by taxing citizens. They increase and decrease the price of the Syrian Pound at will.

Anas, a former banker, said: "Bashar destroy our work and send us bust."

Medical trained staff in Syria are limited and excluded to patriotic doctors and nurses who are helping the wounded and supporting the local field clinics on the ground.

There's no life for the citizens of Syria and in Idleb because it is the land of the FSA. The regime hates the province and hopes for it to be destroyed.

Living conditions are terrible for all Syrians in this year, especially in winter, but particularly in Idleb.

Syrians have suffered for more than 3 years, they wish that 2014 will carry prosperous future and open new door of peace and love.