The Syrian authorities told the Palestinian delegation, “If the militants want to fight us, let them do so outside the camp.” 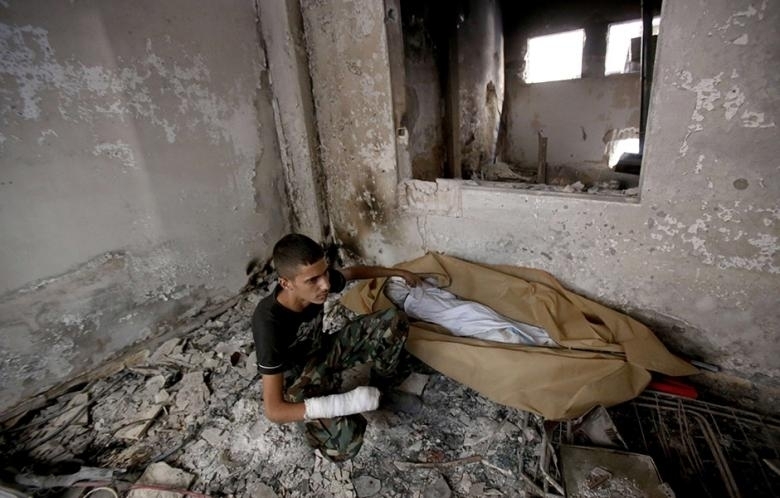 In Damascus’ Yarmouk Palestinian refugee camp, the specter of death from hunger continues to threaten lives. Today, the Palestine Liberation Organization will try again to bring in a convoy of humanitarian aid to the camp, after five previous attempts were foiled by militants.

Damascus Countryside – Starvation deaths in the Yarmouk Palestinian refugee camp near Damascus have increased dramatically. As of January 1, 10 people had died. The number rose to 15 over the next 10 days and jumped to 44 in the past two. The latest victim was baby Israa al-Masry.

Militants inside the camp have blocked the efforts of the Palestine Liberation Organization (PLO) to bring food to the besieged residents. Today, the PLO will try to break the siege with six trucks of relief aid, following negotiations between Palestinian factions and camp militants.

One negotiator expressed concern that “the aid might not make it to its destination at the UN Relief and Works Agency (UNRWA) schools because militants might confiscate it.” He added, if this aid “crosses a distance of five kilometers on the street controlled by the militants, it will be distributed by UNRWA staff.”

Palestinian ambassador to Syria, Anwar Abdul-Hadi, told Al-Akhbar, “We will try for the sixth time to deliver aid to the people under siege. In previous attempts, militants created problems and prevented the trucks from entering. Two days ago, militants prevented us from pulling the wounded … out of the camp.”

On another note, a delegation from the PLO’s executive committee visited the Syrian authorities in an attempt to find a solution to the siege of Yarmouk. One delegation member said, “The Syrian government asked that foreign fighters be taken out of the camp in order to lift the siege.” The Syrian authorities told the Palestinian delegation, “If the militants want to fight us, let them do so outside the camp.”

The Syrian authorities told the Palestinian delegation, “If the militants want to fight us, let them do so outside the camp.”

The parties are considering a new initiative, similar to the last initiative, which calls for the ouster of foreign fighters from Yarmouk; returning the Syrian police to their positions inside the camp; and coming to a settlement with anti-regime Palestinian fighters.

A field commander from the Popular Front for the Liberation of Palestine-General Command (PFLP-GC) told Al-Akhbar, “The initiative came as a result of the worsening humanitarian situation in the camp. The number of deaths is expected to exceed a hundred in the coming days if food and medicine are not delivered.”

Previous attempts to bring relief envoys into the camp were subjected to heavy gunfire and mortar shells. The last such attempt took place on January 8, with the convoy unable to go beyond the area controlled by the state.

An activist who participated in the convoy told Al-Akhbar, “Opposition fighters prevented the convoy from entering. They blocked an attempt to reach comprehensive reconciliation in the camp at the last meeting on January 3.”

He believes militants block food and medicine in order to hold the Syrian government responsible for the starvation, and accuse Palestinian factions of failing to help the camp residents. “After refusing to allow aid to enter Yarmouk, they spread rumors that the militants fed the starving people in the Palestine Hospital,” he said.

However, the opposition accuses security checkpoints and PFLP-GC of “fabricating security incidents that prevent the convoy from entering the camp.” Abu Dayeh, a Palestinian opponent of the regime, told Al-Akhbarr, “The security checkpoints adjacent to al-Regi Square and Palestine Street create, with the help of members of the PFLP-GC, tension in the days preceding the arrival of the relief convoys, and terrorize residents and prevent them from approaching the convoys by carrying out fake clashes right before they arrive.”