Until last week, food aid had not been delivered to the camp since September 2013 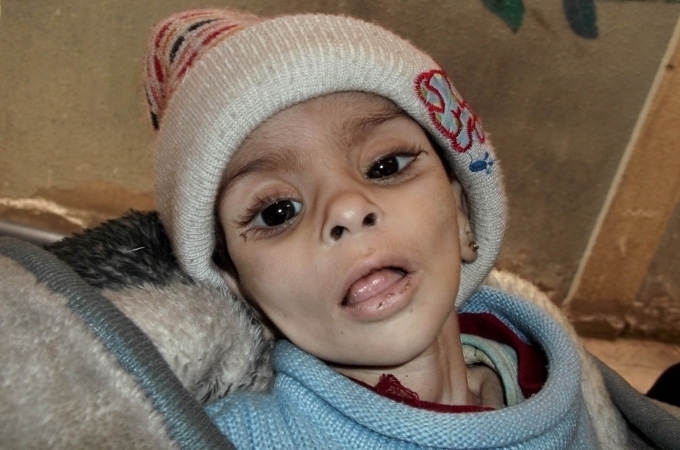 Ahmed Odeh was watching a YouTube video about the abysmal conditions in the Palestinian refugee camp of Yarmouk, near Syria's war-torn capital Damascus. A small girl in the video was crying and shouting, "I'm hungry, I'm hungry."

After watching the video, "I had the idea to make a campaign to help these people," said Odeh.

So he gathered a group of his Palestinian friends from the Dheisheh refugee camp in Bethlehem, where he lives, and they made a plan. The group decided to start an effort called "Life Line" to collect aid for Palestinian refugees in Yarmouk, which – like many areas in Syria – is surrounded by fighting between forces loyal to President Bashar al-Assad and rebel factions trying to overthrow him.

The Syrian civil war has now raged for nearly three years with 130,000 killed and no end in sight.

In the Yarmouk camp, more than 55 people have died from hunger and the majority of children are suffering from malnutrition, according to Abdullah al-Khatib, a Palestinian activist living there. Most people are consuming soup made from water and spices, Khatib said, and some are reportedly  eating grass for survival.

Starvation conditions continue despite recent UN efforts to get much-needed food through the street battles and checkpoints, and most residents are still searching garbage piles for anything edible, Khatib told Al Jazeera on Monday. Until last week, food aid had not been delivered to the camp since September 2013.

Since Life Line was launched in the first week of January, it has spread to cities across the West Bank and to East Jerusalem. The Facebook page used to coordinate activities and update followers about the campaign's progress now has more than 100,000 members.

Rami Abu Hadeed, one of the campaign's founders, estimated there are somewhere between 300 and 500 volunteers collecting clothing, food and money in the occupied territories for trapped Palestinians in Yarmouk.

The aid and other assistance has yet to be sent to the camp, but organisers are coordinating with the Palestinian Authority's ambassador to Syria who will handle the logistics, Abu Hadeed said.

"Our message is, it's not the things that we send, but it's a human message that we stand with you… We are one people," he said.

Yarmouk is located just south of Damascus and was established for refugees after the 1948 Arab-Israeli war that led to the creation of Israel, and the displacement of hundreds of thousands of Palestinians.

Over the decades the camp grew into a large Damascus suburb home to 160,000 residents, prior to the outbreak of Syria's civil war in 2011, according to United Nations Relief and Works Agency (UNRWA) estimates. Now, only about 18,000 people remain inside the desolate camp.

The civil war reached Yarmouk in December 2012 when rebel forces entered the camp attempting to consolidate their positions to the east and south of Damascus, and push on towards the city centre. Syrian government forces responded with aerial bombardment , sending thousands fleeing in search of shelter in other parts of Syria and Lebanon.

Forces loyal to Assad succeeded in surrounding the camp and controlling access to it in February 2013. Military-held checkpoints opened to allow aid to enter and residents to escape, but in July  government forces began blocking access points. Yarmouk has now been under siege for more than 180 days.

"All parties to the conflict must urgently facilitate unimpeded access to humanitarian relief to the civilians trapped in Yarmouk, before more children die," UN High Commissioner for Human Rights Navi Pillay said recently , adding moves to halt the delivery of aid may amount to "a war crime".

As the blockade has drawn on, the humanitarian situation inside the camp has become increasingly dire.

Remaining residents do not have access to enough food or adequate medical treatment, and there are cases of women dying at childbirth, a UNRWA statement said.

The desperate situation prompted the UN to launch a social media campaign calling on participants at the ongoing Geneva II peace conference "to lift the restrictions on Yarmouk refugee camp and all areas of humanitarian need in Syria".

On January 13, an UNRWA convoy carrying food for 6,000 people – along with 10,000 doses of polio vaccine and other medical supplies – was forced to turn around when it came under fire while trying to enter the camp.

About 138 food parcels had been delivered to the camp as of January 21. "Each food parcel feeds a family of up to eight people for about 10 days," Gunness said.

But, a supposed agreement  between rebel groups to let aid in has so far failed to lift the siege.

The small amount of aid that entered the camp did not even come close to meeting the needs of the people inside, Khatib says. "There is no fighting inside the camp now, just the siege and death from hunger."

The suffering of Palestinians in Yarmouk has struck a chord with Palestinians in the West Bank, East Jerusalem, Gaza and Israel. In addition to the Life Line campaign, a group of students in Nablus recently raised $33,000 to donate to the camp, and Palestinians have taken to the streets in Gaza City, Haifa, Ramallah, Jerusalem and other cities to call on the international community and the Palestinian Authority to help lift the siege.

But the people in Dheisheh and other refugee camps feel particularly close to what is happening in Yarmouk, Odeh says.

"We know what it feels like to be under siege for many months," he said, alluding to 24-hour curfews imposed on Palestinian cities by Israel, particularly refugee camps during the first and second Intifadas.

Conditions in Dheisheh are still not good, although they are nothing close to what is happening in Yarmouk right now, Odeh added.

The unemployment rate is about 52 percent, compared to 23 percent in the West Bank overall, according to camp director Mustafa Younis.

"The most important thing is that we need to be united and help others with whatever we have," said Um Ramadan, UNRWA worker and a resident of Dheisheh.

For Khatib back in Yarmouk, the efforts in Dheisheh reflect "the ability of Palestinian youth to work together towards a common interest".

"And our interest today requires stopping people from dying of hunger in Yarmouk, and breaking the cruel and brutal siege," he said.