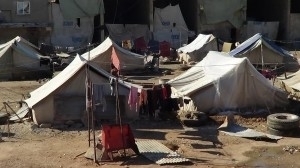 Since the start of the fighting in Syria, tens of thousands of internally displaced people (IDPs) descended upon Tartous, a small province with a population of 930,000, according to the Syrian Government’s Central Bureau for Statistics’ 2009 calculations. It makes for a tense situation, since most of the province’s residents are Alawite, a sect known for its general loyalty to the Syrian President Bashar al-Assad’s regime. Thousands of Alawites have been killed in battles with the opposition.

The latest statistics from the Syrian Ministry of Social Affairs and Labour at the start of 2013 indicate that the number of IDPs in Tartous reached 225,360. There are no detailed and comprehensive statistics because many new IDPs keep pouring in every day. Many activists and organizations agree that they currently number over half a million. IDPs are spread among a number of shelters overseen by the Ministry of Social Affairs and Labour, some of which are old government buildings, while others are camps outside the city, rented chalets, and even homes and shops. Often more than one family occupies a single space.

Many IDPs in Tartous live in relatively safe conditions, but from time to time they are exposed to harassment from security forces and militias due to problems connected to aid and the deteriorating economic situation. This is particularly true in the camps and other centres overseen by the government that suffer from bureaucracy incompetence and corruption.

Khaled, 50, spoke about the city’s welcome of the IDPs, despite some racist encounters from time to time. Khaled was displaced from Aleppo and appears to be comfortable staying in Tartous, though he believes that some harassment is inevitable.

“Our problem is not with the residents of Tartous,” he said. He did not specify where the problem lies however, but his wife claimed that she experienced what she called “bad behaviour” and sectarian discrimination from government institutions distributing aid.

“I was also insulted in the markets and on public transportation because I am displaced. On the other hand, there are others who treat us well and offer us help,” she said.

Souad, 38, an IDP from the Homs suburbs was clearer.

“It’s true that no one tried to harm us, but we feel unwelcome here, particularly by the Alawites and by some of the richer residents of all sects,” she explained. “The scary thing is not the residents but the security apparatus. They arrested many of us for no reason.”

Souad fears the possibility that IDPs may be oppressed, or even killed, should the opposition attack the city.

“I hope to God that militiamen do not attack this city because we will have to carry the consequences even though we have nothing to do with it,” she said.

Although this hasn’t happened, Souad’s fears are somewhat justified.

“It’s true that many IDPs are innocent women and children,” said Kamal, 24, a college student from Tartous. “But some of them are sympathetic to the armed sectarian Sunni opposition, and there is no doubt that there are sleeper cells among the IDPs,” he added.

Kamal claims that a warehouse of weapons was discovered in one of the Sunni-majority neighbourhoods in the city, but Damascus Bureau was unable to verify this.

“I don’t know if we can kick the IDPs out, but welcoming them was a big mistake,” he said.

This is not only Kamal’s opinion. Many others share it and have begun to spread rumours about tunnel construction and weapons storage in the city. A Facebook page was created demanding that the IDPs be expelled from the Syrian coast, but it was later shut down.

However, not everyone thinks this way. Government employee Saleem, 40, is an Alawite from the Tartous suburbs.

“There are some calls to expel the IDPs from the city. This is a huge mistake. These are Syrians and human beings like us. Maybe some of them pose a threat to the city, but danger is everywhere in the country whether they are here or not. This is racist, inhumane and unpatriotic,” he said.

Many of Tartous’s residents participated in emergency relief efforts through various organizations or independently.

“The harassment facing IDPs in Tartous is no more than what happens in any place where there is displacement. There is fear and anxiety at the presence of strangers, in addition to the tensions because many residents of the city have been killed in battles between the government and opposition forces in the regions that the displaced have come from,” said Abu Arwa, a humanitarian relief activist.

“For example, thousands of IDPs live in Dreekish, an Alawite town in the suburbs of Tartous. Even though it has lost hundreds of its residents in battle, there were no incidents of aggression or discrimination towards the IDPs,” he added. “On the contrary, their children began attending the town’s schools normally. There may be some minor harassment here and there, though.”

Abu Arwa believes that the calm and welcoming environment comes from the residents of Tartous, while any anxiety and fear of the future come from the regime, its actions, and its discourse. According to Abu Arwa, the regime alone will be responsible for any aggression or clashes.

“The shelters are subject to strict regime security surveillance. You can clearly see the sectarian and regional discrimination at regime checkpoints and in the popular committee’s militias. They are the ones spreading rumours that are later revealed to be false about IDPs being armed and committing crimes. The regime cynically spreads fear, racism, and hatred that they later use to their advantage in their fight against their enemies,” he said.