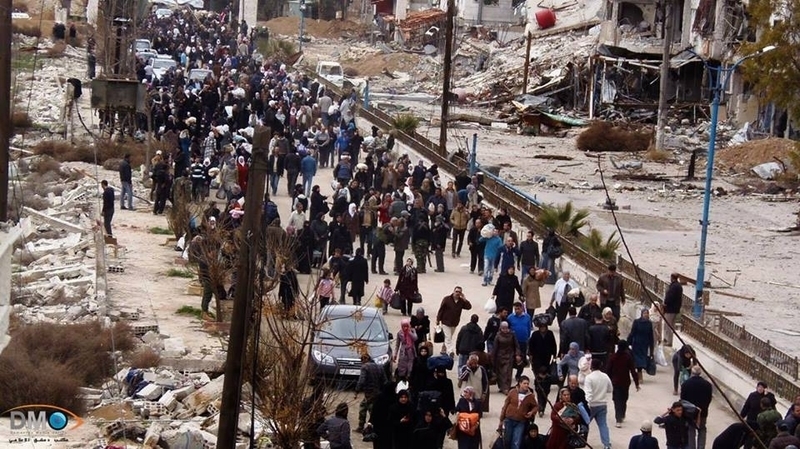 While Bashar Al-Assad’s delegation was putting sticks into wheels, throwing around public accusations and insults, and including the coalition members on its terrorist list, it was also trying, at the same time, to conclude truces in many of besieged areas around Damascus. They were using persuasion and intimidation policies to force these areas to comply with its conditions. Military airplanes threw explosive barrels on Aleppo, Daraa, Yabroud, and other besieged cities.

The regime tried so hard to secure these truces by using any possible means to confuse and mix-up the two concepts of truce and reconciliation, in which truce reflects a temporary condition while reconciliation reflects a permanent solution. The regime tried to give the impression of achieving progress in its relationships within the country, securing victory, proving its superiority, overcoming all opposition politicians, and expanding its control once again over many areas. This policy depended upon offering temptations and sending delegations separately to the besieged areas in order to accept partial lifting of the siege or the entrance of some food supplies. The regime even took some photos inside [the besieged areas] of its flag on top of one of the buildings to prove its superiority and control without any foreign interference.

What are the areas that held the truce?

Many truces started last November. It began with the cities of Kudsia and Al-Hameh in the northwest Damascene countryside. Then, the city of Maadamieh in the west and Madaya and Yarmouk camp in southern Damascus, then [came] the deceleration of reconciliation in Barzeh in the north of Damascus. After that, the cities of Yalda, Babila, Beit Sahem, and Akraba in the south [agreed to reconciliations]. The regime announced upcoming similar reconciliations in Al-Hagar Al-Aswad, Tadamon, Al-Qadam, maybe Daria,  and other attempts to hold the truce in Douma, the center of eastern Ghouta and in Zabadani in western Gouta, in order to close all the fronts to Damascus.

The city of Homs witnessed a truce for several days around the old city and the Al-Waer area. A truce also occured in the city of Al-Qunaitera in Khan Arnabeh, Trnjeh and Jabata.

Scenes from the truce [areas]:

A young child was killed and eight people were injured after Assad’s forces opened fire on crowds in a new violation of this truce. Regime forces opened fire again on 27.02.2014 upon crowds gathered around a military checkpoint. Some were still trying to go in to check their homes, and many of them are trying to escape from the besieged city. It should be noted that the terms of this truce consisted of giving civilians the complete freedom of movement in and out the area. It never happened.

[Harasta witnessed] the assassination of Sulaiman Salaas, the deputy mayor of Harasta city, one of the godfathers of the truce agreement in the city.

His body was found on Wednesday morning, with two bullets in his head, after negotiations between the regime and the liberated city. This led to the truce on the western side of the city.

The pressures to comply continue for the rest of the city, which is divided between supporters and non-supporters. All parties lack confidence in the regime.

Some describe these truces as new maneuvers in order to pressure civilians, politicians, and the FSA to [allow] the regime to regain its control of besieged areas after blocking, starving, and killing people inside for more than one year.

The FSA is facing difficult circumstances to accept and comply with these truces due to double-pressures. First, the regime has completely closed the areas and is still bombing them. Second, the civilians inside are exhausted from hunger.

Some civilians who agree to these truces say that the FSA failed in protecting them. They are trapped between Assad’s explosive barrels and missiles on one hand, and the warlords inside on the other. Some argue that accepting the truce is a betrayal of all the martyrs and the revolution. Accepting the truce would give the regime a new opportunity to re-dominate liberated areas.

What are the features and the guarantees?

The regime has dealt with these truces in cities, towns, and villages separately, preventing them from making a unified decision. [This has included a] policy of offering temptations to small areas in order to weaken big ones.

·         Most of these negotiations were confidential and verbal.

·         The Red Crescent and Red Cross were not included in these negotiations and agreements, neither as a guarantor nor observer.

·         [There is] no mentioning of the parties that participated or signed these agreements.

·         The regime has concentrated mainly on media, by taking photos of fake celebrations of its forces and the FSA. Many scandals have shown that the regime used its own forces as FSA members.